Will the Dream Hall come to life again?

Digital Society team Epoch was admitted to the almost empty Dream Hall last month. It’s the first new team following the new policy, and probably the last for this year.

The building stands quiet. By walking up the stairs to the second level, a vast vestibule is visible with all kinds of objects and machinery. Notably, several car frames hang on the wall; their wheels seem impatient to touch the ground again. There are rooms, some with doors opened wide, but hardly anyone passes them save for one of the few remaining staff. The only sound is the faint ticking of the main clock. The Dream Hall is still in slumber.

Due to the coronavirus measures, the once-bustling hall was forced to close its doors for more than a year. Students have not worked there ever since; they can only delegate small tasks to the staff. Despite this situation, the Dream Hall Steering Committee keeps on the lookout for the possible reopening in September subject to the authorities’ permission. But even if that comes to pass, the Hall will probably not be as bustling as before.

The reason for this is the new policy to include teams that tackle TU Delft’s societal themes (Health & Care, Energy Transition, Digital Society, Climate Action, and Urbanisation & Mobility). “We are aiming for a diverse Dream Team roster that covers all societal themes,” says Joost Ravoo, the Dream Hall Steering Committee Chairman.

The new roster Earlier, most of the teams only covered the Urbanisation & Mobility theme by developing types of advanced transportation. At the January 2021 entry, the Committee culled these teams, leaving only three recurring ones: Eco-Runner, Hyperloop, and Solar Boat. Some of these are also in the process of shifting their focus to the energy transition. Another admitted team was Project March, which is developing an exoskeleton for paraplegic people and thus falls under the Health & Care theme.

In the March entry round, a new team called Epoch passed the admission and will be an official Dream Team starting in September. Dream Hall still has five spots available, but the Steering Committee is not planning to open another round until January next year since there are no teams ready for the screening. If new applicants do emerge, the Committee may organise a new entry round later this year.

Given their niche in artificial intelligence (AI) and data science competitions, the Dream Team Epoch is the first Digital Society team. Ravoo suggests that their presence may stimulate new directions. “We want to encourage other teams to be AI-savvy as well. By reaching out to other teams, Epoch can learn and address multiple themes. We hope it will lead to a more multi-disciplinary growth for the team.”

Learning by competing One student is exploring the void Dream Hall. “This is our working space, as is the next room too.” He is Matthijs Schrage, the Team Manager of Epoch and he shares the team’s motivation, “Personally, I have a great interest in AI. Just like the internet today, we won’t be able to live without this technology in the future. Plus, you can apply it everywhere.” 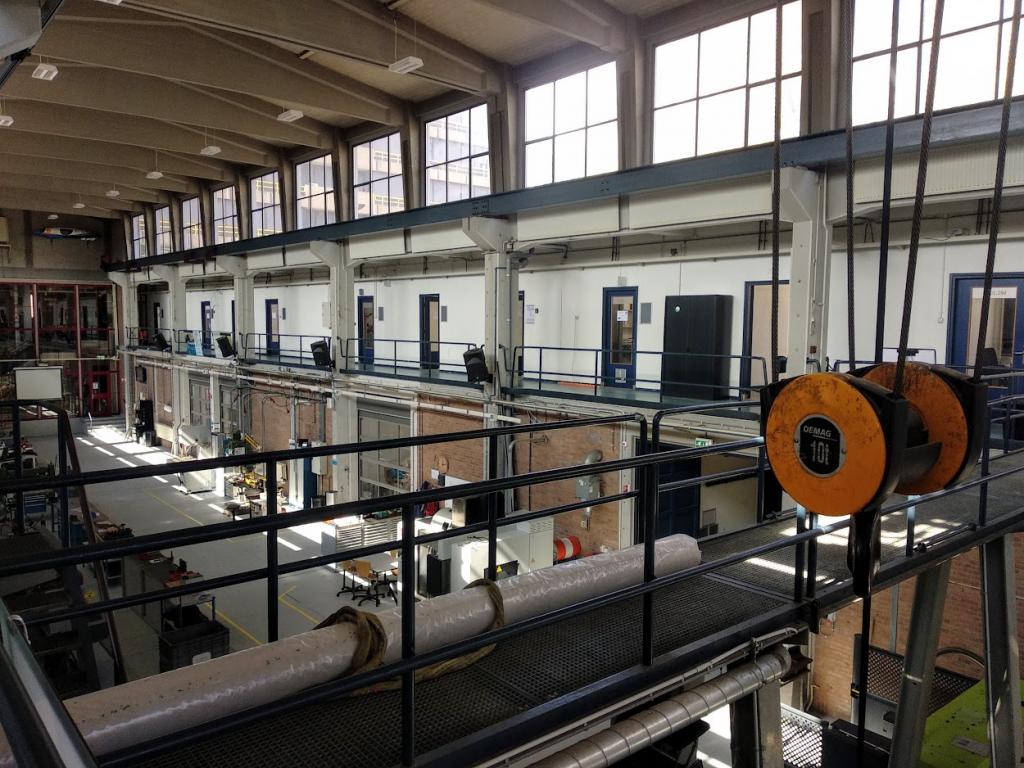 The offices in the second level (Photo: Rayan Suryadikara)

Dream Team Epoch has been up and running since June 2020. They already have four competitions under their belt and are currently contending in another two. “The reason we started Epoch is to have more people realise and experience the importance of AI. And you’ll learn better with practical experience such as a competition instead of sitting in a lecture,” adds the TU Delft mechanical engineering bachelor student. Now the team roster consists of three people in the operations and nine AI techies for the two running competitions.

The advantageous difference that Epoch has compared to other teams is that they can partake in many different competitions during a year. Each competition usually takes only two or three months. This allows the students to gain much experience in one year if they keep signing up for different prize fights. “Your first competition will usually not be really good, but you will definitely improve in the later competitions,” says Schrage.

He mentions the Hockey Player Localisation, their fourth competition in which they came first. The contest’s goal is to locate the hockey players during the match by creating a bird’s eye view of hockey players on the field. “It is a pretty difficult problem because some of the data sources came from noisy and low-quality video recordings. But some members of our team had gained knowledge from previous competitions, and in the end, we won the contest,” he explains.

Team Epoch is taking their first steps by entering small-scale competitions with shorter periods. The larger-scale ones are harder, and they are filled with more seasoned research teams led by professors. Moreover, smaller competitions require less time to produce the design process. This allows a considerably faster cycle to create programmes than the other, more mechanical Dream Team peers.

The Epoch founders, including Schrage, already have Dream Team experience with WASUB X – a human-powered submarine project – but the swift, sprint nature of Epoch raises a different challenge. Schrage continues, “What we really learned was how to set our priority and timetable. We could not complete the whole model in our first competition because of this problem and this cost us the competition. Two months of hard work went to waste because we weren’t experienced enough to prioritise the process’ sequence.” 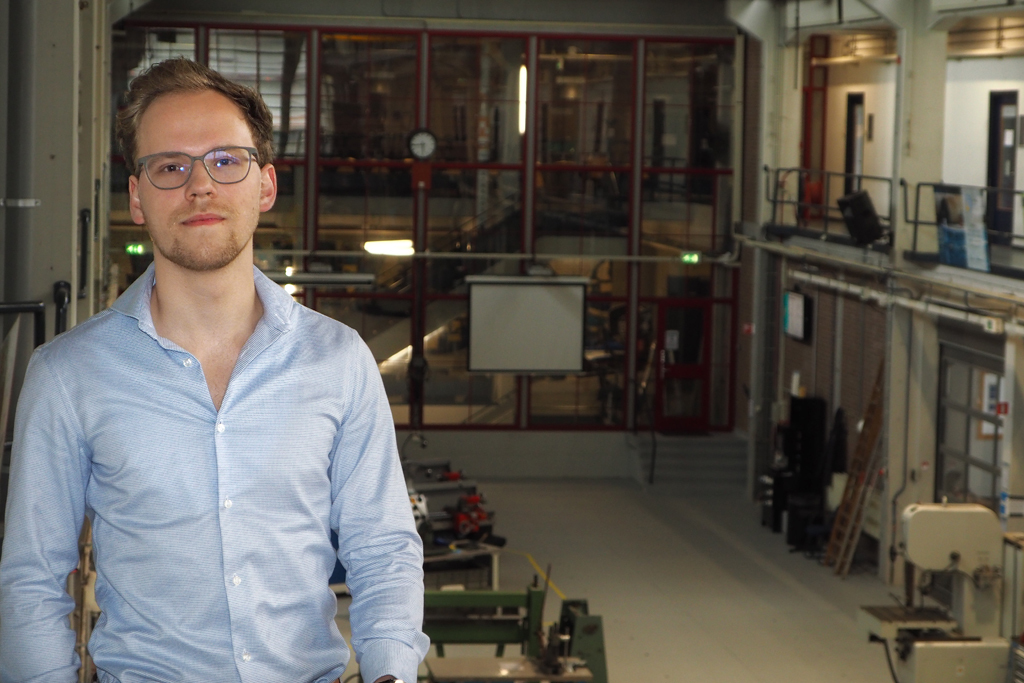 Matthijs Schrage: “We are proud to be at the forefront of a focus on AI in the Dream Hall.” (Photo: Jos Wassink)

Benefits of being a Dream Team Becoming one of the Dream Teams brings several benefits. One of them is renown. “We want to call ourselves a TU Delft Dream Team,” acknowledges Schrage. The reputation will help the team with recruitment and sponsorship agreements. Another benefit is facilities. Ravoo adds, “While the Dream Hall is currently dominated by mechanical services, we also provide computer capacity and offices for our Digital Society team.” Related to the time issue, Epoch will need high-performance CPUs and GPUs to crunch heavy calculations in a matter of hours which could take weeks for standard PCs.

After the admission announcement, Epoch is shifting its focus to look for new members for the next competitions. Most of the previous contestants have already been involved for a year and may not continue. At the same time, it is receiving many applications, and among them some encouraging words from TU Delft professors to the team.  “We hope our team grows and reaches a wider audience, making them aware of AI’s importance. Once we are known in TU Delft and throughout the Netherlands, we hope to become independent,” says Schrage.

Call for the budding teams Before the pandemic, the Dream Hall’s spaces used to be packed with teams. This year, the building still has five available spaces. These are reserved for teams with other societal themes – but no one has applied yet. Ravoo acknowledges the transition’s slow start but beams with optimism for what the new policy has in store. “We believe that new student teams will pop up to work with the new themes. In fact, there is a budding team currently considering the Elon Musk’s XPRIZE Carbon Removal competition. In the meantime, students with short Special Projects can always request to use free workplaces.”