This is what the new Dream Teams should look like

Eco-Runner continued as the Dream Team this academic year. (Still from the Eco-Runner X presentation in June 2020)

Few Dream Teams will return to the Dream Hall next academic year. Who wants to and may stay, and who will leave, voluntarily or not? New guidelines will bring major changes.

Normally, hundreds of students work on speedy racing cars, human operated submarines and sustainable engines in the Dream Hall behind the Faculty of Civil Engineering and Geosciences. Corona closed the Hall and put the international competitions that the Dream Teams are working on on hold. It was the prelude of a new future in which the preparations actually went into overdrive because of corona. A vision statement has now been prepared that will likely entail major changes. We ask seven questions about the future of the Dream Teams.

1. Why should the Dream Hall change at all?

The Dream Hall Steering Group, under the chairmanship of Joost Ravoo, the Director of Communications, has several reasons for this. Over the last few years, the teams have overly concentrated on faster, higher and further, and had passed the stage of ‘radical innovation’. The Steering Group does not believe that the projects are innovative enough, while safety is becoming more of an issue. The low point was when the Nuna solar vehicle caught fire (in Dutch) in 2019.

Apart from this, the Steering Group sees too few students from faculties other than AE and 3mE, and does not see either enough of a flow of teams through the Dream Hall or enough variation in their projects. TU Delft wants to profile itself in five socially relevant themes (Health & Care, Energy Transition, Digital Society, Climate Action, Urbanisation & Mobility), while almost all the Dream Teams concentrate on just one theme: mobility.

2. A vision statement has now been produced, but first, what is the current status of the Dream Hall?

The Dream Hall has been closed since spring 2020 due to corona. When it closed, the Dream Teams were shocked to hear that the Steering Group advised against continuing projects in the 2020-2021 academic year. After a written exchange in which the Teams expressed their concerns and argued for a transition year, a meeting was convened and, in the end, the Steering Group compromised with the teams.

They were given two options for the this academic year. One, continue as Dream Teams in a trimmed down form or, two, continue as an independent team outside campus and outside the responsibility of TU Delft.

Forze Hydrogen Electric Racing went for the second option. Its Team Manager, Mark Jan Uijl, says that “We quickly realised that our project would be subject to long delays if we had to wait for the Dream Hall to reopen, and it was not even certain if we would be able to work in the Dream Hall again. So we decided to continue independently.” The team moved to the Schiehallen in June and a new Forze team started work in September 2020.

Other teams like Formula Student and EcoRunner went for the first option. Their contracts show that they are subject to strict requirements. For the time being, they may not recruit new members and not produce anything outside campus. They also need to confer with the Communications department should any ‘impactful points’ arise, in particular ‘if they would affect’ TU Delft’s reputation. Apart from these requirements, the team members will not receive a monthly subsidy out of the TU Delft Facilities Regulation for Student Organisations Fund. Should a team break these terms, TU Delft may terminate the support with immediate effect and exclude it from future balloting. “This is a prelude to the new policy in which both team rights and obligations are more explicitly stated,” says Ravoo. 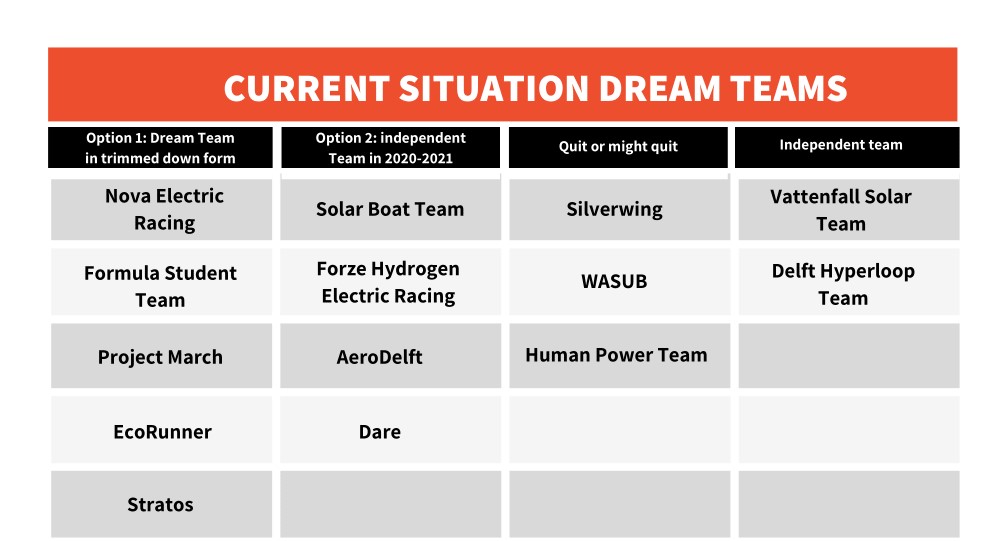 3. How did the vision statement come about?

It was prepared with the involvement of the students right from the start. The Steering Group called in the help of a working group on which two then team managers and former Dream Team member Lenny Bakker had seats. They kept in touch with all the Dream Teams in a WhatsApp group. For this article, Lenny Bakker takes on the role of spokesperson for the Teams. He says that the students well understand the need for the long-term changes. “It was unavoidable as there was never space for new teams or projects.” According to Bakker, the most important thing for the teams when writing the vision statement was not to preserve their positions, but for students to be able to gain ‘a learning experience’ from the Dream Teams.

4. How do teams qualify for a place in the Dream Hall?

Any current or new team can apply as long as their projects meet various criteria.

The Steering Group is now working on the details of these requirements. It is already clear that a maximum of three teams are welcome per social theme. The Steering Group also knows the teams that are currently interested, but will not yet share that information.

5. Will the Dream Hall not be half empty, knowing that most of the current teams want to work on mobility?

Steering Group Chairperson Ravoo does not think so as the current teams can widen their focus, for example from mobility to the energy transition. He also expects new teams to apply. However, student Lenny Bakker questions this. “Actually, I think that not that much will change for the time being, simply because there are no new teams ready. Mobility meets the competition requirement. There are other types of competitions such as iGem or Solar Decathlon, but that’s about it and not every subject is suitable. It’s less attractive if the only thing you do is make software.”

6. Some Dream Teams have used the hall for years. How long may teams use the hall in the future?

In the future, Dream Teams will have to sign a contract that states their rights, obligations and duration of occupancy. The current teams that may continue will be able to do so for up to four years. After that they will have to go through the balloting again. New teams may stay in the Hall for a maximum of one year longer.

There will also be space for ‘special projects’ of up to six months. While the Dream Teams are explicitly independent of research and education, the projects are expected to be part of these. These projects do not have to enter competitions, but they do need to have a ‘clear and realistic objective’. These projects can potentially be an incubator for new Dream Teams.

7. When does the admission procedure start?

At present, the Steering Group is working on the final admission details so that the current teams can go through the procedure at the end of January and new teams can apply. Should there still be space available after the first round, a second admissions round will be held in February and March. Bakker hopes that the Steering Group will be less strict then. “Students join Dream Teams to become better engineers. This should come first. To our mind, any requirements related to TU Delft’s themes should be secondary.” The Steering Group understands that the transition “will need some getting used to” for everyone, says Ravoo. Some Teams will also be disappointed. “But over time we will all be proud again of the new teams. Hopefully they will be even better and more varied than ever.”