New qualification requirements for Dreamteams must ensure that broader social themes are also reflected in the hall. (Photo: Project March)

The Dream Team policy will be overhauled. New standards should bump up the in and out flow through the Dream Hall. Will all the Teams come back?

In 1999, the DUT racing car and Nuna the solar driven car laid the foundations for what have now become the Dream Teams. TU Delft is known around the world for its successful student teams that work on projects from beginning to end and bear full responsibility for their work.

Dream HallOver the years, the number of teams has increased to reach its current number of 13. Almost all are based at the D:Dream Hall workshop on the Stevinweg. While the concept has been successful, over the years points of improvement have emerged. ‘Points that have become ever more urgent’ as the Dream Hall Steering Group emailed to all the team managers. The Steering Group, consisting of Theun Baller (Dean 3mE), Gerrit Kahlman (Coordinator Sustainability Operations), Just Herder (Professor 3mE), Rogier Hageman (Real Estate Manager) and Joost Ravoo (Communications Director), want to introduce changes.

“Now that the Dream Hall is closed because of the coronavirus and many matches and competitions have been cancelled in their physical form, there is space to look critically at the set-up and the future of the Dream Hall and Dream Teams,” explains Ravoo on behalf of the Steering Group. “The primary purpose of the Hall is now lost, so let’s use the time well by thinking about it should be.”

While the idea of an overhaul is not new, the message nevertheless came as a surprise to the current Dream Team members. “It was a shock,” says Dream Teams representative Melissa Oremans, “we didn’t feel listened to at first, mostly because of the communication. Now we stand behind the mission to revise the process.”

Surpassing radical innovationThis could involve defining new qualification requirements for teams for a place in the Hall. This is currently done on the basis of three criteria: safety, in and out flow, and governance (i.e. the rights and obligations of the Dream Teams). The Steering Group will hold discussions about this with the Dream Teams and various internal and external stakeholders over the next few months.

‘Teams do not stop when they prove a fundamental theory’

Why is a new policy needed? Ravoo explains. “Take the aspect of security. There are always risks associated with the design of moving and racing objects. Look at the NunaX that caught fire last summer. We do not want to hamper the teams’ autonomy, but as a university we do feel a certain level of responsibility. Each team recruits new members every year to further improve and go even faster. Their work is never done as the teams do not stop when they prove a fundamental theory.”

The NunaX which was destroyed by fire in 2019. (Photo: Jorrit Lousberg)

By way of example he mentions Forze. This high tech hydrogen racing team was the first hydrogen electric vehicle to ever win an official race for petrol driven racing cars. “The team proved that it could be done. That is fabulous! But what about next year? Go even faster? Prove something else?”

Team Forze Hydrogen Electric Racing indeed proved that racing hydrogen powered cars is possible. “But if we want the next car to race in a higher class, we will have to jump countless unsolved hurdles.” Still, Ravoo believes in the benefit of looking at the finiteness of a project. “When has a project surpassed radical innovation? When is a team done in the Dream Hall?”

Apart from facilitating the in and out flow of the teams, the Steering Group wants to encourage work on wider societal themes where TU Delft wants to have an impact with its science and education to also come back to the Dream Hall. Ravoo says that “The Dream Hall has a strong history of projects that emerge from 3mE. This is very focused on mechanics and that focus could be wider.”

Clear criteriaThis is up in the air at the moment. There is a chance that not all the teams will return. According to Ravoo this does not mean that these teams should stop. The Vattenfall Solar Team, for example, has chosen to relocate and move forward. Projects do not have to limit themselves to the Dream Hall.However, Dream Teams representative Melissa Oremans does not believe that it is that easy to find alternatives outside the Dream Hall. “This really won’t work out for all the teams.”

And if a team moves on independently, will it lose the name and status of a Dream Team? Ravoo says that the name ‘Dream Team’ is not a protected name and that any team anywhere in the world my use it. “What we are thinking about though, is changing the name of the teams that work in the Dream Hall to ‘TU Delft Dream Team’. So we need to find a way of handling the status and branding of the teams that leave the Dream Hall in the future.”

Does adding ‘TU Delft’ to their name not clash with the Dream Teams’ autonomy? “No as there are a lot of complaints now about the rules. We need clear criteria and clarity on the rights and obligations of the teams. This is what we mean when we say we need better governance. That independence will continue, even after the review.”

Short termThe current team managers are concerned about the impact of the changes in the short term. What will these mean for the new batch of prospective Dream Team members that are waiting impatiently to start?

“As we do not know if and when the Dream Hall will open again and when and how to resume competitions and matches, the Steering Group is advising students to think carefully about this academic year,” says Ravoo. “Think about postponing joining a Dream Team. There is so much uncertainty that it would be a shame to throw away an academic year.”

At present, the Dream Teams cannot use the technical facilities on campus, and it is likely that the facilities will be very limited in the new academic year. “But we are doing our best to support the Teams that still want to prepare for competitions or have changed their project goals,” says Ravoo.

“It is up to the Teams,” clarified Melissa Oremans, “they need to choose between continuing, freezing their activities for a year or, in anticipation of the new policy, stopping entirely. We respect the position of the Steering Group but leave it up to the Teams themselves to decide what to do.” She hopes that the team managers consult the Steering Group shortly and come to an acceptable decision. 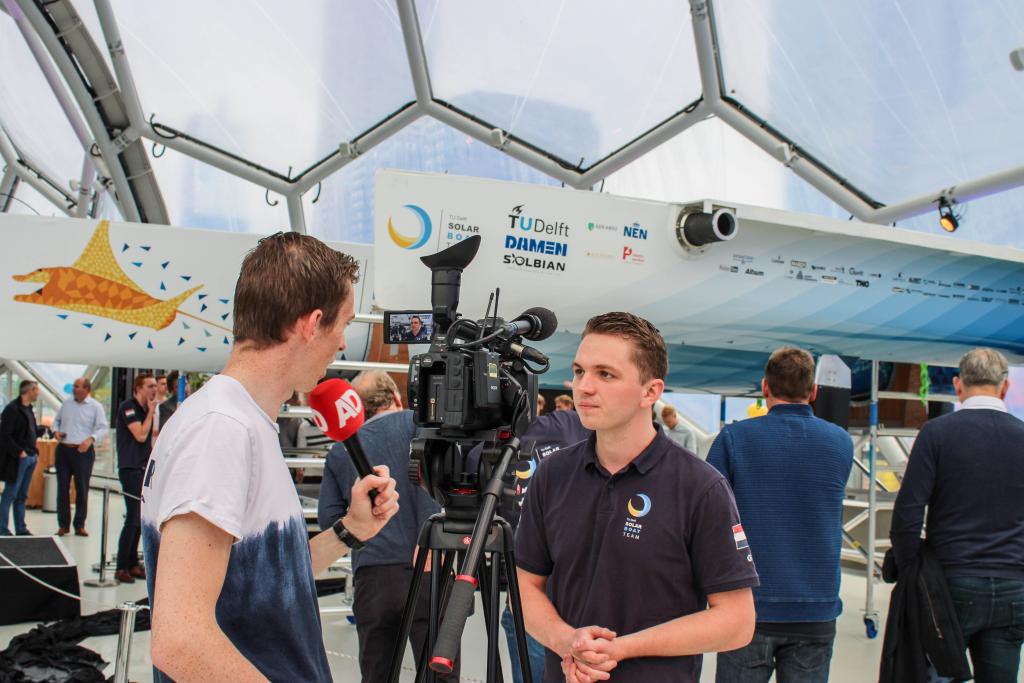 Lovebaby
Dream Teams generate a lot of publicity, are successful internationally and are sometimes the very reason that some students want to study at TU Delft. Why take the risk of losing the very hobby horse of TU Delft? “It is a dilemma,” admits Ravoo, “Dream Teams have become a baby. You are proud of them and they do amazing things, but at a certain point you have to let them find their independence and leave home. We would be even prouder if we could start another 10 projects in the Dream Hall in five years time, and hopefully with an even wider societal impact than the current Teams.”