The micro-satellite Delfi-n3Xt (delfi-next) is back. After seven years of radio silence, it suddenly started sending messages in February. What happened?

Aerospace engineering student Nils von Storch still remembers when the micro-satellite fell silent on 28 February 2014, just three months after its launch. Until then, it had been sending data on the incoming solar power, battery status and other specifics at every pass over the Ground Station on the EEMCS high-rise.

Von Storch, who was part of the operations team back then, always assumed that it was caused by a software failure. Why else would it go quiet so suddenly after a transponder test?

In the weeks after the sudden radio silence, the Delfi-n3Xt operations team, led bij project manager Jasper Bouwmeester, repeatedly tried to fire up the micro-satellite from the Ground Station on top of the EEMCS building – but to no avail. Von Storch then wrote a computer programme to continue listening to Delfi-n3Xt’s signal at every pass. That was in 2015 – over a year after the launch, when the satellite was in a deep coma.

Engineer Dr Chris Verhoeven, who was closely involved in the TU Delft nanosatellite programmes, remembers that Von Storch contacted him as a first year student to request if he could please visit the Ground Station that he had heard about. Satellite communications were clearly his passion. For nine years now, he has taken every opportunity to work in it. “He is in heaven,” comments Verhoeven.

You have mail
For seven years, Von Storch worked on other satellites, and then suddenly his first project came calling last month. On 9 February 2021, he received an email notification: ‘130 frames received from Delfi-n3Xt’, it read. Could that be true? Was it a computer error? He listened at the pass. The sound was familiar.

He decided to decode the message. He converted the bits into measured values and found that the data made sense. Batteries one and two were dead, it read, the other two were empty. The on-board clock, that was started at the launch on 21 November 2013, was still running, albeit half a day late. These data confirmed that the message must have come from the Delfi-n3Xt. But why had it been in a coma for seven years? And what had woken it up? What had happened to the satellite that came in from the cold?

Verhoeven has an idea that needs to be tested against the data. He assumes that the satellite had been ‘bricked’ by a software error. The satellite could be switched into transponder-mode for communication with radio amateurs. Switching back to normal mode had proven tricky before. When they tried it again, the satellite seems to have been taken hostage by its own software. The ‘brick’ situation held on as long as the operating system was under power.

With two batteries broken and two empty, it seems that the satellite had lost power on the dark side of the earth. When it came back into the sunlight, the system had a reboot and phoned home. 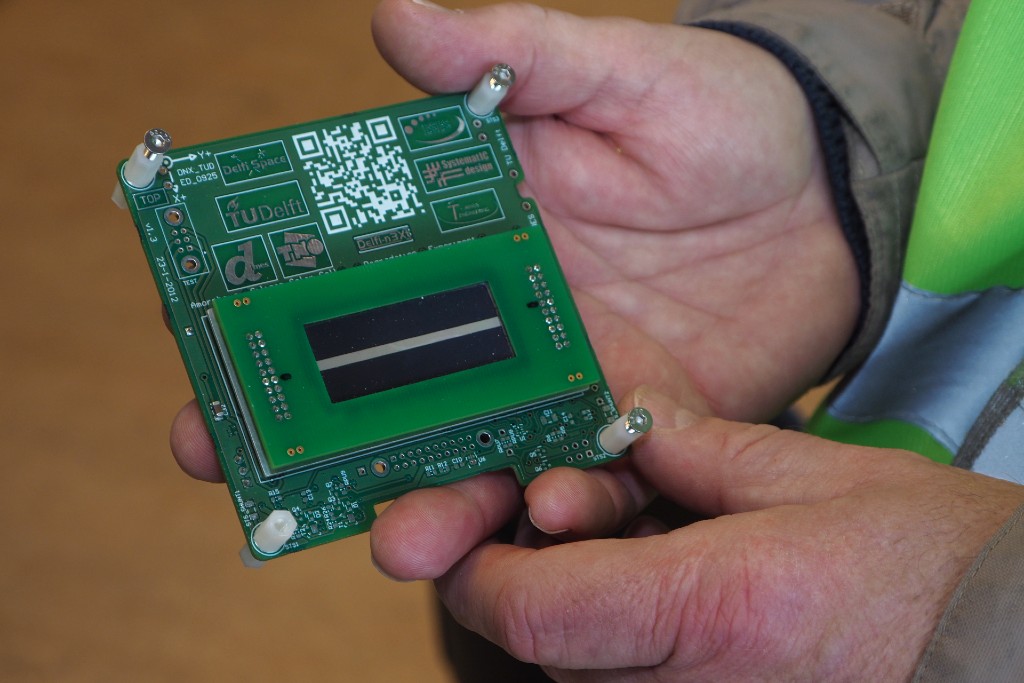 The long strip is the Dimes solar cell, the twin of which has been in space for seven years. What are the differences? (Photo: Jos Wassink)

“There is a wealth of information waiting for us,” says Verhoeven. For example, there is data on the custom-made solar cells. Principal researcher Dr René van Swaaij (EEMCS) can compare two sets of solar panels: one that has stayed behind, and the twinset that has been in space for seven years and been bombarded with high-energy radiation.

How much radiation did Delfi-n3XT endure in comparison with its sister satellite Delfi-C3? Why is the value for the current through the processor ten times too high? Can the on-board SD-card be used for data storage? Does the S-band transmitter allow faster data transfer?

According to Verhoeven, several topics have emerged that qualify for a master thesis. Perhaps also for Nils von Storch, who has developed into a satcom specialist. “He is a fine engineer”, says Verhoeven. “He only needs to get the stamp.” Nils nods pensively.