If you want to look some five years into the future of flight and space exploration, just visit the yearly Design Synthesis Exercise (DSE) for bachelor Aerospace Engineering students in June. It’s here that external parties float their ideas, and scout for talent.

At the DSE of 2014, the Royal Netherlands Air Force (RNLAF) tested an eye-in-the-sky called HIRES. Six and a half years later, the Air Force’s first-ever satellite is about to be shipped for launch. But it carries no camera. This is what happened in between.

‘The RNLAF wanted their own observations’

“Remember the summer of 2014?” asks Trevor Watts. He joined TU Delft after retiring from Airbus Defense & Space because TU Delft was looking for ‘someone experienced’ to talk to their students. “It was the summer that MH-17 was shot down over Ukraine,” Watts explains. “The RNLAF looked into the future and wanted their own observations. Could we have seen the missile? Could we have detected it by satellite?” That was the impetus for another DSE assignment in 2015 to ‘make a conceptual design of a constellation of spacecraft for a … mission to detect and locate radars …’ With four satellites worth EUR 88 million, the outcome of this LeopardSat study was way over budget (by EUR 25 million).

Three millionNevertheless, the interest in a demonstrator satellite had been awakened in the Air Force. Lieutenant Colonel Bernard Buijs, an AE alumni himself, remembers that Commander Schnitger wanted a feasibility study into the relevant possibilities of Cubesats. “The Air Force did not yet want a contractor, but needed impartial scientific advice,” Buijs explains. “That brought us to TU Delft’s Space Systems Engineering section.” Watts continues. “The RNLAF gave us a small budget,” he remembers. “Stefano Speretta, Alessandra Menicucci and I did the study, which terminated in the summer of 2016. The Ministry of Defence then raised funding for the BRIK II programme.” 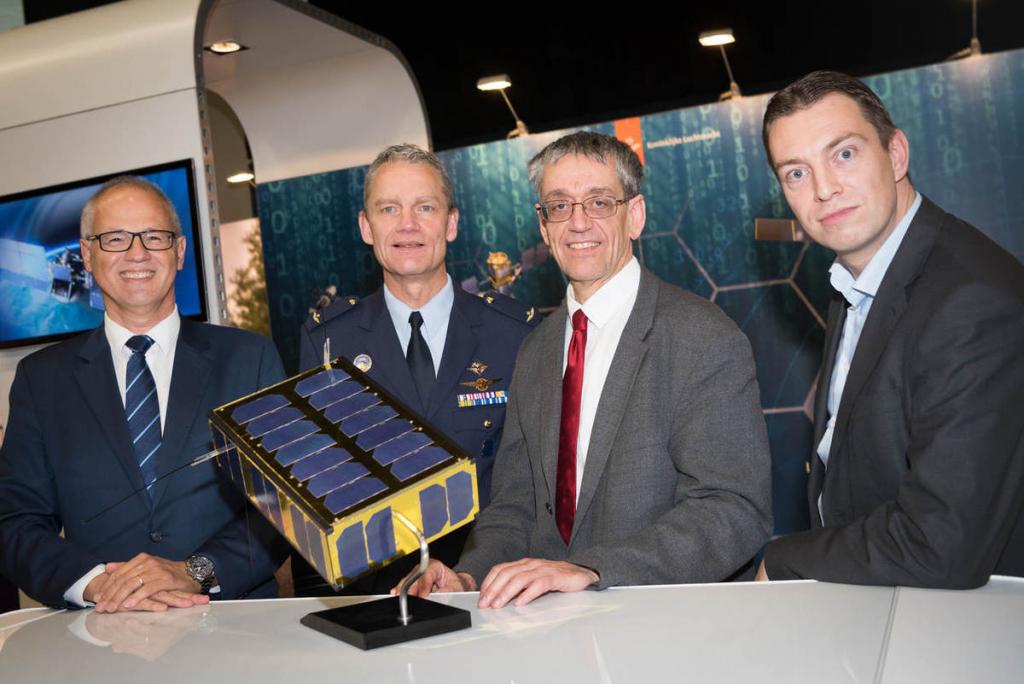 Cubesat specialist ISISpace signed to do the design, assembly, launch and subsequent transfer of control over the satellite. The TU Delft spin-off can look back on 15 years of experience in small satellites and over 40 launches. ISISpace CEO and TU Delft alumnus Jeroen Rotteveel enjoyed the collaboration with the Air Force. “They were open and keen to learn. In an innovation project like this, it’s essential to be open about what you don’t know yet and learn along the way. Not all our clients can do that.”

All aboard
Lieutenant Colonel Buijs, who led the operation for the Air Force, was responsible for the choice of instruments on board. “The payload had to be relevant for the military,” he explains. “And we had to choose between buying off the shelf, developing instruments ourselves or commissioning them.” Eventually, Buijs and his team from the Defense Space Security Centre: (I) ordered one tested instrument from the University of Oslo; (II) had the Air Force communications group in Dongen develop a satellite communication system; and (III) commissioned NLR to develop a locating receiver.

At 550 kilometres altitude, the satellite is flying in the middle of the ionosphere where a strange phenomenon occurs called ‘scintillation’. Small-scale (100 metres to dozens of kilometres) irregularities in the ionospheric plasma (freely floating electrons and ions) disturb or disrupt radio waves, like GPS signals, that go through it. It predominantly happens near the equator, where GPS receivers are prone to serious misreading. But it also occurs at high latitudes, where there is a correlation between the Northern Lights (aurora borealis) and scintillation. The scintillation monitor (I), manufactured by the University of Oslo, measures the conductivity of the plasma between antenna tips. The measurements may contribute to space weather maps giving information about the amount of scintillation, and thus of the attenuation or phase shift of signals that can be expected.

The Air Force’s own instrument (II) called Store & Forward may be compared to Voicemail. Someone knowing when and where the BRIK II passes overhead can upload a message, which is then transferred to the Air Force ground station in Dongen. There are multiple passes, about 12 hours apart. So, the maximal delay for this Space Voicemail is about 12 hours. The digital message can be voice, text, image or any other file format.

The third instrument (III), developed and built by NLR, determines the position of ‘sources of certain frequencies’, which can be read as positions of military systems.

‘The Cubesat is very tightly packed’

The launch was originally planned for mid-2019 and has now been deferred to April 2021. What happened? “Lots of things happened,” says Speretta. “We had planned a launch with the European launcher Vega, but that didn’t work because Vega was grounded for 18 months after an accident in 2019. Meanwhile, Virgin Orbit had issues too. The satellite development process had some problems and of course Covid didn’t help either.”

“The Cubesat is very tightly packed,” Watts explains. “It has three instruments on board and we had to solve the electromagnetic interference issues that these caused. That took time. Now we’re waiting for the final tests of flight software.”

BRIK II is currently undergoing these tests in the cleanroom at ISISpace in Delft. Shipment to the USA for the launch will take place between the end of February and mid-March, says Rotteveel. Rocket launches are notoriously hard to plan, but launching from a flying Boeing 747, as the Virgin Orbit does, takes away some of the obstacles. The weather has much less influence, and you don’t need to evacuate an area for safety. And yet, says Rotteveel, launching on time is probably an illusion.

Next stepsAssuming all goes well, and the RNLAF will have a functioning satellite by the beginning of April, what is next?

“It’s definitely meant as the first in a series,” says Watts. “This was mostly an exercise in satellite procurement. Now the RNLAF trains its own officers to go through the commissioning process. There are new programmes coming up.”

The NRC newspaper writes: ‘The launch of two military satellites in cooperation with Norway are planned for 2022.’

In a reaction, Buijs writes: ‘The cooperation with Norway is also a technology demonstrator, like BRIK II, and it is an ongoing programme. The Netherlands’ goal to protect our critical space infrastructure and to use the potential of the space domain in gathering the right information to make the right decisions, strongly depends on the new Cabinet formation (after the general elections in March, Eds.).’

Cooperation with other countries offers enormous potential as satellites can be coupled into almost continuous coverage. Dozens to hundreds of microsatellites have already been coupled into swarms. With prices going down for launches, access to space is becoming affordable. While international cooperation with small satellites has great potential, as Buijs explains, you have to bring your own satellite to get a place at the table. 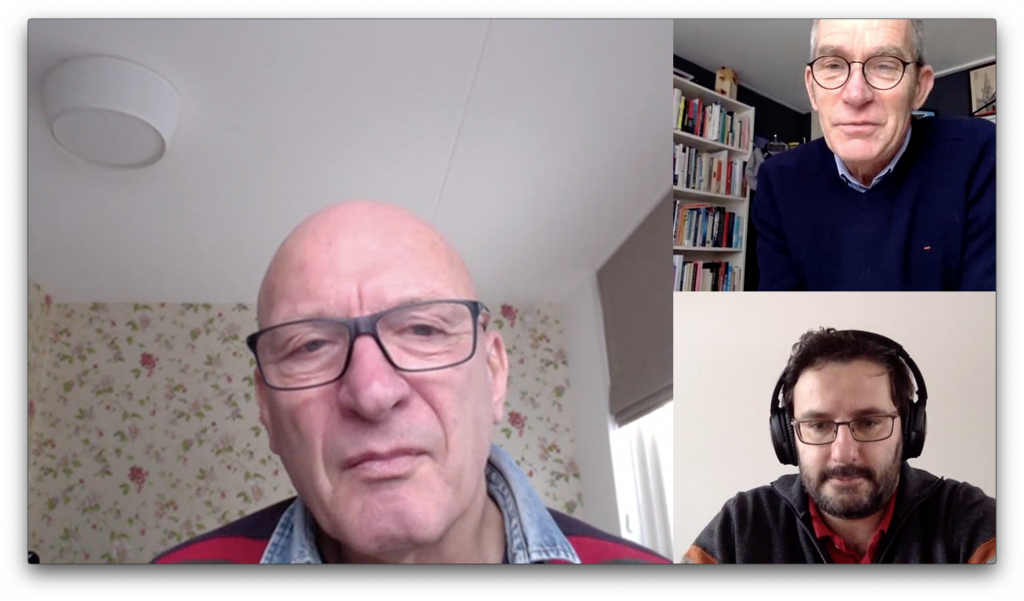