More and more internationals in the Netherlands

More international students are choosing Dutch universities or universities of applied sciences. Their number has more than doubled in the last 10 years.

Ten and a half percent of students in tertiary education now come from abroad. Most of them are studying at a university. Previously, the majority chose universities of applied sciences, but this has reversed since 2011. This is mostly because of the increasing popularity of master courses at universities, where one of every five students is now an international student.

The interactive chart below shows the amount of Dutch students (blue) and the total of international students (brown) per faculty. Hover over the countries to find out the exact amount.

India, China, Belgium, Germany, Italy and Greece
Of the international students, most come from India, China, Belgium, Germany, Italy and Greece. This is in line with the outcomes of the monitor  as German students (22,125) in particular find their way to Dutch lecture hall seats. This is followed by Chinese (4,475) and Italian students (4,077). What is striking is that in the last five years, more Indian, Italian and Spanish students are wanting to earn their degrees here. They mostly choose economic studies at universities of applied sciences or universities. As has always been the case, art degrees at universities of applied sciences continue to attract many internationals – more than one third of these students comes from abroad. At university level, it is mostly the social and technical studies that attract international students.

The interactive map below shows the countries where at least fifteen or more students come from.

Exchange
The Netherlands is also becoming more popular among students with an Erasmus grant. Almost 10,000 international students came to the Netherlands in 2016 for one or two semesters through a university of applied sciences or university exchange programme. Another 4,000 students are doing internships here. For the purpose of comparison, in 2007 these were 7,000 and less than 1,000 respectively. 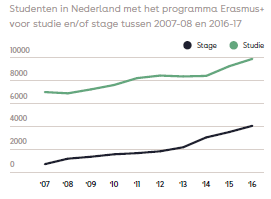 One quarter of Dutch graduates go abroad
Many Dutch students also go abroad for internships or exchange. One quarter of all tertiary education graduates crossed the border for their degree course. This puts the Netherlands far above the European average of 20% for 2020. Norway heads the list with 35% going abroad for an exchange, internship or research.

To British universities
Dutch students mostly go abroad to study at prestigious British institutes such as Oxford, Cambridge and King’s College London. Belgium is popular too, mostly among medical and obstetrics students that are subject to a numerus fixus here. 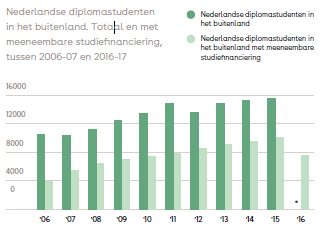 “This is less true for students that go abroad for one semester as that is often part of the curriculum. But if it is an extra activity that may delay the study, the students will think twice about it,” expects Nuffic spokesperson Anne Lutgerink.

Teacher training students have little international experience
Despite the growing interest in internationalisation in higher education, there is still much to gain, says Nuffic. For example, only 13% of university teacher training students have relevant international experience. Of the university trained prospective teachers, that share is even lower at 6%. Teachers play an important role in developing international skills among pupils. As classrooms in the Netherlands are becoming more diverse, this is a great challenge, says Nuffic.

What the Executive Board wants to hear from students

How is the corona crisis affecting students and their studies? Executive Board member Rob Mudde wants to discuss this with them. What can he do for them?
Education