Architecture and the Built Environment bachelor and master students played around in Minecraft recently, working on buildings in Delft and Naples. A bit of imagination helps.

The corona crisis is speeding up innovative digital learning initiatives. Take the Faculty of Architecture and the Built Environment, or to be more precise, the Heritage & Design minor, the honours programme on research and design and the master studio of the Heritage & Architecture Lab. Jointly with citizens of Delft, and using Minecraft, the master students are creating new designs for three buildings in Delft: the Prinsenhof Museum, the Kabelfabriek and Gele Scheikunde. And the honour students? They could not travel to Italy as was customary. Instead, they are working with Italian students to redesign a church and a museum in Naples using Minecraft from their student rooms.

In the Minecraft game, players use blocks to build their own world. They usually create fictional landscapes and buildings, but many players often recreate existing buildings. Last year a group of TU Delft students made a digital version of the campus using blueprints, geodata, and Google Maps.

Master’s student Diana Ugnat (25) and seven residents of Delft used Minecraft to create a new design for the Gele Scheikunde building. The question is why would a prospective architect use Minecraft when there are so many design programmes specially for architects? “The programme is a really useful tool to discuss architecture with people who have no affinity with the subject. Instead of finding common ground through hours of talking and sketching, you can work out your ideas and visualise it in Minecraft immediately.”

Architecture and gamingFor her graduation studio, Ugnat is working with the people who live around Gele Scheikunde and architects and ecologists at Heritage4All. She interviewed all those involved and then, in a joint workshop, worked on Gele Scheikunde 2.0. At the end of the workshop, the groups of people from Delft presented their perfect version of the building. Ugnat’s group broke off part of the building, added bits to it and created more gardens. “It is becoming more common in architecture to involve the people in the area, experts and stakeholders in the design,” says Ugnat.

‘Minecraft is really useful for co-designing and decision making’

Assistant Professor Bruno de Andrade (Faculty Architecture and the Built Environment) taught the module. Since obtaining his PhD, he has been involved in using gaming for architecture. From an early age, he has loved building and design games such as Age of Empires, SimCity, Constructor, Tropico and The Sims. “When I did my PhD at the Federal University of Minas Gerais in Brazil, my supervisor advised me that the best thing would be to do my research on gaming and architecture,” says De Andrade. “They were my two passions – architecture and gaming. At first I thought that my supervisor was joking.” While working on his PhD, one of the things he looked into was which game would be best for laypeople to work on architecture. Minecraft was one of the winners. “It is really useful for co-designing and decision making. As it is a sort of digital Lego, anyone can run with their ideas straightaway. It puts non-architects such as neighbourhood residents on an equal footing with architects.” He also used Minecraft in the minor and the honours programme. “Unfortunately, the students could not travel to Italy as is customary, so I brought Italy to them.” 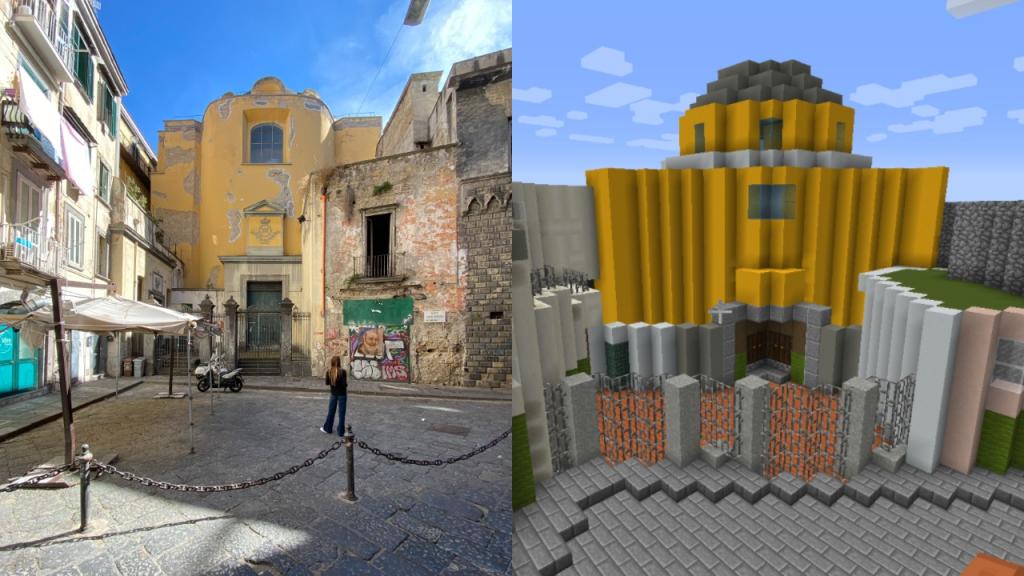 The church in Napels and the church Bruno made in Minecraft. (Photo: Bruno de Andrade)

One of the students was Maarten Hikspoors. He and a group of Italian students started working on a church in Naples. “The building had to be repurposed and be made wheelchair friendly. As there is an architect firm and a university next to it, we decided to build a hall for models.”

Hikspoors does not think Minecraft is a suitable design tool for details as it is too ‘blocky’. He explains. “You need to have some imagination as, for example, there are no images of real benches and you have to use a block which represents a bench.” As do Ugnat and De Andrade, he thinks the programme is mostly useful to talk about architecture and design with other people. “We could not walk around a large architectural drawing together, but we could walk through the Minecraft church together.” Teacher Bruno de Andrade is planning to use Minecraft more often for architecture teaching and research. In his next teaching semester, he is even putting the whole city of Delft into Minecraft. “I hope to be done by the beginning of September so there’s still a lot to do.”

Universities in particular are pleased with the extra available funding for higher education. Universities of applied sciences and activists do have some concerns.
Education

Higher education institutions can look forward to receiving hundreds of millions of euros. Much of the money is earmarked as ‘personal working capital’ for researchers.