Researchers led by Dr Riccardo Riva (Faculty of Civil Engineering and Geosciences) have reviewed the data of eight tidal stations along the Dutch coast for the past 100 years. For the longest time, the sea level rose by about 1 mm/year. But in the last 30 years, this has increased to just under 3 mm/year. Conclusion: sea level rise along the Dutch coast is accelerating. They published this result on 14 June 2022 on the website of IOP Environmental Research Letters.

Seawater rises and falls. Apart from the tide, air pressure and changes in the wind also influence the water level. The researchers have now corrected the historical tide gauge data for the known effects of wind, air pressure and tide. In doing so, they stripped down the data to the bare essentials, thus getting a clearer look at the hidden long-term signal of local sea level rise. 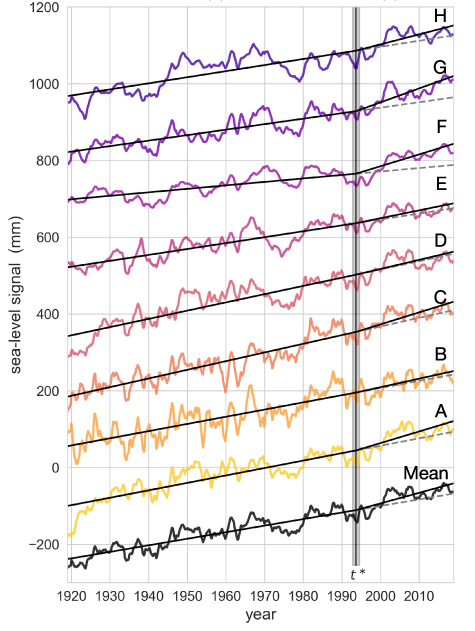 The corrected sea level heights from Scheveningen (A) to Cuxhaven (H) over the last 100 years. (Illustration from the publication)

A striking feature is the kink that occurs at the beginning of the 1990s. What caused this sudden acceleration? "The official answer is that we don't know for sure yet," Riccardo Riva tells us over the phone. "But we suspect it has to do with the warming and associated expansion of the Atlantic Ocean that manifests itself on our coast."

One way to test that idea is to build a mathematical model for the expansion of the Atlantic Ocean. Soon, says Riva, a number of researchers, as part of the TU Delft Climate Action, will join forces to explore the cause of the acceleration in greater depth. (JW)