The Dutch government on Monday began a campaign urging employees and students to go to zelftestonderwijs.nl. They can order free corona self-tests there since last Wednesday.

According to the Hoger Onderwijs Persbureau (Higher Education Press Agency), the enthusiasm among students to get tested has been small so far. And they don't always know that they have to order the tests themselves online. The government wants to change that. Minister van Engelshoven therefore calls on students to make as much use as possible of the free self-tests. 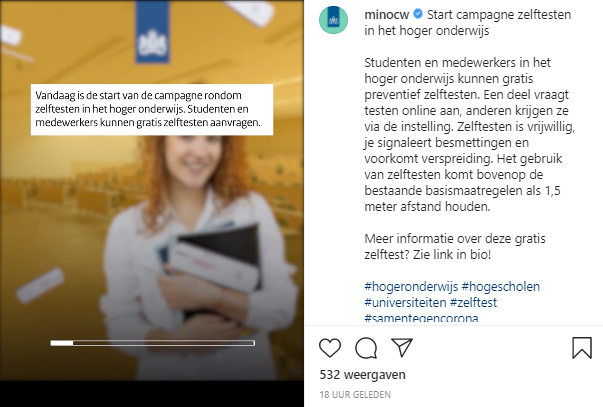 The government also wants to be able to make the coronation tests mandatory for access to the campus, if the situation requires it. On Tuesday, the House of Representatives (Tweede Kamer) will vote on that bill.

In the United States, more than two hundred educational institutions, including the prestigious Yale, Princeton and Harvard, have introduced a vaccination requirement for students. Exceptions apply only for medical or religious reasons.