The career event in better times. Due to the corona crisis, many young people have lost their jobs. (Photo: Flickr)

With the economy in a slump caused by the corona crisis, unemployment among young graduates and students has increased. “No fun times for young people looking for a job.”

As a result of the coronavirus crisis, the Dutch economy experienced an unprecedented contraction of 8.5 percent between April and June this year (the second quarter) compared to the period from January to March. This exceeds all previous records, according to Statistics Netherlands.

The contraction has left its mark on the job market. There are fewer people in paid employment, wrote the statistics agency in June. The decrease was particularly pronounced among young people: from 1.4 million employed in February to fewer than 1.3 million in May.

“These are not fun times for young people looking for work,” says Peter Hein van Mulligen, chief economist at Statistics Netherlands. “Their employment opportunities are generally very closely linked to the economic situation.”

Unemployment is rising among people on temporary contracts in particular, he explains. “And young people are disproportionately represented in this group. Many have a part-time job.”

Now the figures for the second quarter have been published, it is clear what the downward trend means for young job seekers in possession of a degree from higher education. In the second quarter of 2019, the unemployment rate among recent graduates between 20 and 25 years old was just 2.8 percent. This year it has shot up to 6.6 percent. Statistics Netherlands includes in this group anyone looking for a job yet who cannot find one, even if it is only for a few hours per week. 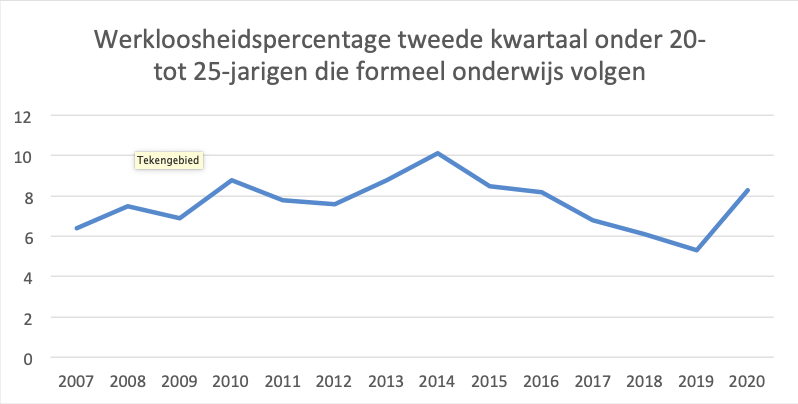 The rates have not yet reached the peak levels experienced during the financial crisis of 2014, when unemployment in the Netherlands was at its highest. The economic picture should look slightly less negative in August, according to Statistics Netherlands.

However, according to Van Mulligen, there is still no cause for celebration. “We are less pessimistic than at the start of the second quarter, but the overall picture is still negative. On the basis of this disparity, we cannot yet say that things are going well. We will have to defeat the coronavirus first.”

English-language teaching: the show must go on

The government says there are five good reasons for maintaining English-language teaching in higher education. English studies will have to meet at least two of these.
Education