Winner Inspiration Award: “Falling flat on your face is all part of the game”

IJsbrand de Lange (left): “The goal is to launch the wearable on the European market in spring 2021.” (Photo: Sam Rentmeester)

Winner of the Inspiration Award 2019, IJsbrand de Lange, has much to thank his thesis supervisor for. “It’s because of him that my company got off the ground.”

Alumnus IJsbrand de Lange was awarded the Inspiration Award 2019 during the opening of the 2019 academic year. What is this award? TU Executive Board member Nicoly Vermeulen explains that it is “An award for a student who inspires the new cohort of students. Someone who dares take that extra step.”

De Lange took that extra step when he founded Stil, a medtech start-up that designed a wearable that suppresses tremors in the arms. He believes that without Winfred Mugge, his thesis supervisor who is also present at the interview, he would not have been able to do this. “Mentors make a huge difference, and certainly in my case.”

How did he come up with the idea for Stil?
“In 2014 I saw a film by the Michael J. Fox Foundation about people with Parkinson’s Disease. They suffer from tremors, involuntary shaking in the arm that arises when the muscles are repeatedly contracted and released. It was strange that there were no solutions for this. As a Bachelor of Mechanical Engineering, I looked at the problem through a mechanical lens. If a machine vibrates involuntarily, you put a damper on it and that takes care of it. Why wouldn’t this work with a person? The idea stayed in my mind and while I was in Germany doing an internship I had a flash of inspiration that I wanted to work on for my graduation project.”

What was the role of your thesis supervisor?
“He was instrumental during my literature study. I was interested in everything and my head was overflowing. Winfred helped me structure my ideas.” Mugge adds that “This is something that students have to go through. It is easy to lose yourself in a literature study. You read more and more and more and think that you are learning.” De Lange concurs. “Until you try to summarise what you have read and realise that you have no structure. At first I really questioned how I would get through this.” To Mugge, De Lange was exceptional. “You were very enterprising right from the start. I have never seen such an enterprising student as IJsbrand.”
De Lange says that “I had already thought about how to commercialise this idea before I graduated.”

What was that idea?
De Lange explains. “I was looking for a solution to resist tremors. I wanted to do this using a technique such as noise cancelling in headphones. I wanted to use mechanics to generate an anti-vibration that works in the exact opposite direction as the tremor. Integrating this technology in a compact wrist brace helps stabilise the arm of tremor patients.” 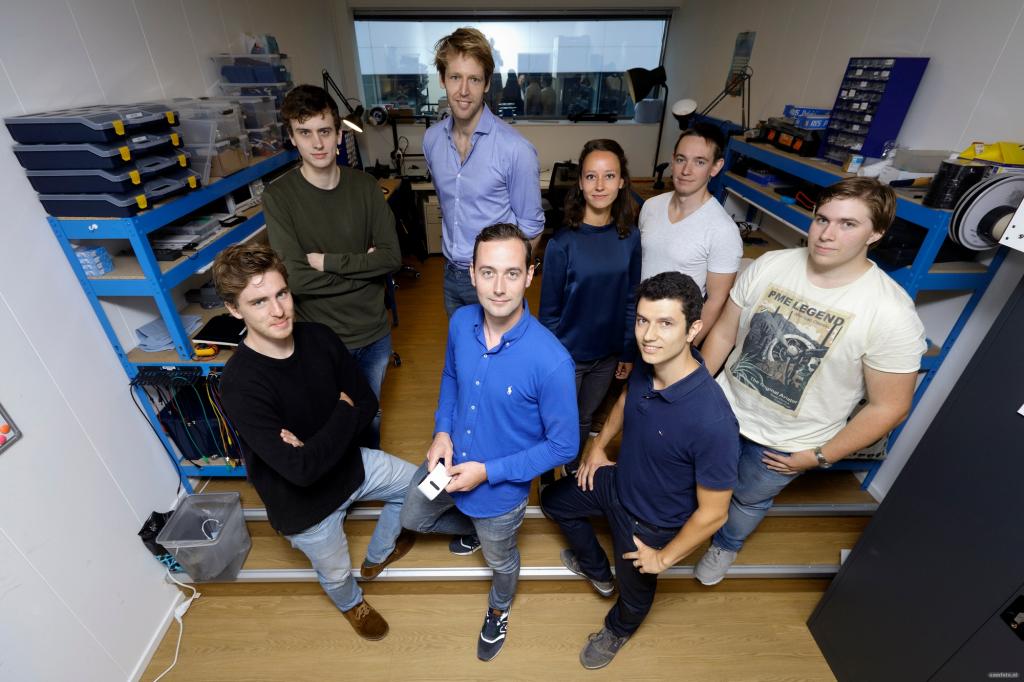 How did you get this idea?
“By testing and testing and testing again. It was tough as it failed and failed again and again. I remember asking myself after yet another failed test if it would ever work. And it was precisely then that Winfred suggested applying for a subsidy.”

Good timing.
“Yes,” says De Lange, “I was really busy but I was glad I did it as otherwise Stil wouldn’t be here now.”

What do you mean?
Mugge explains. “The Netherlands Organisation for Scientific Research (NWO) offers grants to students to set up a start-up that works with a finding from their universities.” De Lange adds. “The money is meant for a feasibility study and to build a good prototype. Many technical ideas stay on the shelf because there is no money available for testing or no market for the innovation. Research is often funded by family and friends. Asking for money is a big step so an NWO grant is an excellent instrument.”

Is it hard to get a grant like this?
De Lange: “Yes. I even had to postpone my graduation by a month. The first round consists of writing a proposal. It’s a full month’s work. I’d completely had it at the end.”

And then you still needed to graduate.
“Yes,” says De Lange, “though writing the proposal was a good distraction. After submitting it I went straight back to the lab and started getting positive results pretty quickly.”

Why did it work out then?
“In the lab there were always other students who I could brainstorm with. Then things took off.” Mugge adds that “This is a good example of what Alfred Schouten and I try to do – to create a community. And this is needed given the increasing number of students. We hold a meeting every two weeks on a Monday for all our graduate students. This means that they become involved in each other’s research.” De Lange laughs. “And it works as the first generation is right here!”

What did it feel like to graduate after such a stressful period?
“It was great, but emotional as well. Just before I started on my graduation project my mother died. In the end I got a 9.5, which was amazing, but what I most wanted was to share that with her.”

‘I am still grateful to TU Delft’

I have no words. How did you deal with this during your graduation period?
“I told Winfred about my graduation proposal and said that I couldn’t start yet as my mother was seriously ill. Two months after she passed away I started on my literature study, but it was really hard. I could barely concentrate. Not surprisingly as you need to process so much. What ultimately helped me was joining a support group. This is a TU Delft initiative where you join other students in similar situations in small groups. It helped me deal with my grief. I am still grateful to TU Delft for this.”

Time to breathe after graduation was not granted to IJsbrand de Lange. One month later, he and his thesis supervisor Winfred Mugge presented his proposal to an NWO committee. Successfully, as they were awarded a Take-Off 1 grant worth EUR 40,000. Enough for a feasibility study into the commercial application of his invention.

What does this grant mean for Stil?
De Lange says that “It was all or nothing. Without this grant I probably would not have continued with the idea. While studying, you are completely focused on the technology but don’t think about the demands of the market. We learned a lot during the feasibility study. We now know that there is a real need for this product.” Mugge adds that “IJsbrand now has a second grant from the NWO, the Take-Off 2 grant. This is a loan of EUR 250,000.”

So how do you see the future of Stil?
“Our goal is to launch the wearable on the European market in spring 2021. We will expand to the United States later. Ultimately we hope to make the brace available through health insurers in around 2024/2025.”

What is the most valuable thing you have learned from each other?
De Lange says “Being able to bring more structure to a project. I am a born optimist and quickly go in every direction. Winfred taught me to be more realistic.” For Mugge, De Lange taught him “To be more positive. I can be quite pessimistic sometimes and I gain a lot from that optimism.”

What do you want to say to the new generation of TU Delft students?
De Lange says “Take opportunities and do not be afraid to fail. It’s all part of the game to sometimes fall flat on your face, but this ultimately makes you much stronger.” For Mugge he finds “it a shame that so much emphasis these days lies on individual performance. Consider your fellow students as a team. Each one brings their own qualities. That is why I am trying to create a community. It is important to look at what we can achieve together.”

As a PhD candidate, how can you best explain your research to a wide audience? Alexandra Sips shares tips and tricks in a new course.
Education