The gap between energy need and microgeneration in electronics is getting smaller by the day. What if sensors are placed and forgotten, but remain active forever?

“There are two trends,” explains Dr Przemysław Pawełczak (Faculty of EEMCS). Electronic devices are becoming ever smaller and more efficient, and the microgeneration of power from light, vibration, temperature differences and even radio waves is steadily improving. “There will come a time when microgeneration produces enough energy to power energy efficient electronics, and then you will have reached autarky. A device will power itself and installation is a question of setting it up and forgetting it.” Pawełczak thinks that the current generation of teenagers that grew up seeing cell phones as an essential part of life, will see mobile phones become self-powering. They may need to shake the phones occasionally though, to keep enough power to get going.

Zero Energy Development
The start-up ZED (Zero Energy Development) won the 4TU Impact Challenge last month. Its drive to develop battery free solutions is unmistakable. EEMCS PhD student Suryansh Sharma describes ZED as “innovators for extreme applications in extreme environments” in its desire to get this world battery free. As an example, ZED won the Airbus competition for aviation innovations last year with its wireless and battery free switches. Each airplane seat has multiple sensors and switches to signal its position, monitor the seatbelt and call the flight attendant for example. Until now, each sensor needs its own cable. ZED’s alternative, called ‘Zero Heroes’ at the time, is not only battery free but also wireless – which saves weight. 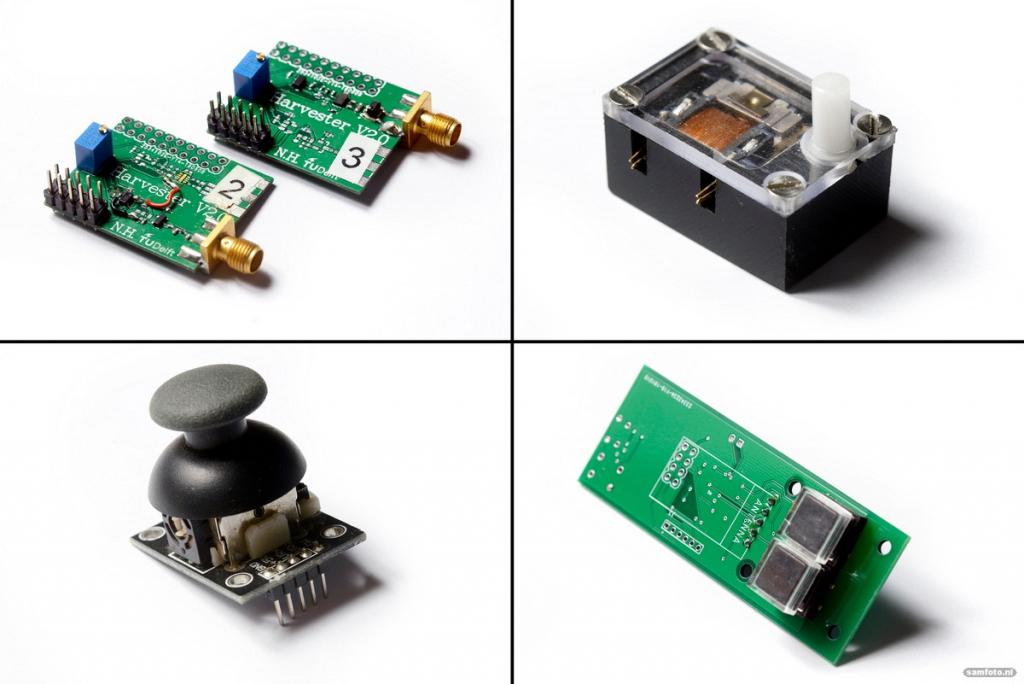 ZED’s mentor is zero-energy veteran Dr Ranga Rao Venkatesha Prasad, better known as ‘VP’. He attends the Team’s interview from India. He has worked in the field of sensors and networks for 20 years. He joined the Faculty of EEMCS in 2005. He knows how challenging it can be to make applications battery free, especially if reliability is a critical factor. In these cases you might need more energy harvesting which would call for a bigger device, making the smaller battery powered alternative more attractive. This has led him to think about a number of self-powered applications such as a water-driven sensor that signals an open tap, or a weight-driven sensor indicating someone is in the office. The sensors send a short string of data to a central network that keeps track of the changes.

Internet of Things
These are the first examples of the much-heralded Internet of Things (IoT) – a network of physical objects that are embedded with sensors, software, and other technologies for the purpose of connecting and exchanging data with other devices and systems over the Internet (definition by Wikipedia). Sharma (ZED) and VP however insist that IoT cannot really scale up unless the sensors are battery free. Just imagine hundreds of thousands of sensors in an airplane, an office or an industrial installation, and think of the poor guy who has to change all the batteries every few years. Not to mention the waste. “Batteryless and wireless are both inherent to the IoT,” says Sharma.

How about security? Doesn’t adding hundreds of open ends to a network make it more vulnerable? Dr Przemysław Pawełczak, also working in the EEMCS group of Embedded and Networked Systems, argues that batteryless and security are unrelated. “Of course, sensors must be updated periodically to keep the Internet of Things up to date. But that is independent of whether the device uses batteries or not. In an earlier project, WISENT, we showed that remote battery free computers powered by radio waves can be reprogrammed wirelessly.”

Reliability is another issue that Pawełczak’s team has tackled. The software on batteryless devices must be robust enough to withstand sudden powering off. You don’t want the whole system to reboot after the power comes back on – you just want it to continue. What’s more, you want the interrupted calculations to continue and produce the correct outcomes as well. The battery free Gameboy, that caught worldwide attention, was Pawełczak’s demo of software that is robust against power failure. If, for example, the power goes down in the middle of a Tetris session, a few firm button-pushes will bring you back into the action where you had left.

The really hard part for battery free electronics is the quality of experience, argues Pawelczak. Personally, he is convinced that electronics should become battery free to become more sustainable and reduce the waste stream. But he also knows that users do not want to be bothered by the device’s energy status. “If offered the choice between a phone that is super energy efficient but less stable, or one that is stable but uses more energy, I think that 99% of the people would choose the latter. That is, sadly, how we are.”

ZED combines energy harvesting with micro power management for industrial applications. The prize for winning the 4TU Impact Challenge is to present at the World Expo in Dubai next year. There, the team will excite visitors’ imaginations: what could you do with battery free wireless sensors that you can just place & forget? With various hands-on energy harvesting devices and a short provocative video, the ZED team hopes to convince visitors that a ‘smart’ future is battery free.

Dutch universities and universities of applied sciences worried about the erosion of academic freedom would do well to end their association with China’s Confucius Institutes.
Science

The TU Delft Automatoes team won last year’s Autonomous Greenhouse competition in which engineers competed against growers for the best cherry tomatoes. This is how they won.