Why is a blue line running across campus?

The degree of latitude, seen from the Faculty of Civil Engineering and Geosciences. (Photos:Connie van Uffelen)

Have you seen this blue line across campus? The funny thing is that it has a time effect.

If you travel far enough north, sooner or later, you will reach the polar circle. A sign sometimes announces your arrival, like in the Finnish city of Rovaniemi. Everyone has heard of other imaginary lines like the equator and the tropics, but now there is also one running straight across campus: the 52nd degree of latitude. When Professor Ramon Hanssen realised this years ago, he came up with the idea of making it visible. After all, results in his professional field of geodesy – which, for Hanssen, involves plenty of earth observation – are often not tangible.

In November 2011, Hanssen and some companions furtively sprayed the line on the pavement. He pitched the idea for a proper design to the Executive Board and the Deans of Civil Engineering and Geosciences and Industrial Design Engineering.

‘The line used to be elsewhere’

The funny thing about the degree of latitude, says Hanssen, is that it has a time effect. This is because the Eurasian continent is moving towards the northeast. ‘So you see the line ‘drop’. The line used to be elsewhere, which means we can make the factor of ‘time’ visible on campus. Calculations have revealed that the continent moves 16 millimetres northwards every year.’

Hanssen’s plan remained dormant for a while, until Michael van der Meer (Head of the Science Centre) breathed new life into it. A line could not be drawn across campus just like that. However, now – seven years, or 11.2 cm later – the line is a fact. It runs between the glass main building of the Faculty of Civil Engineering and Geosciences and 3mE. 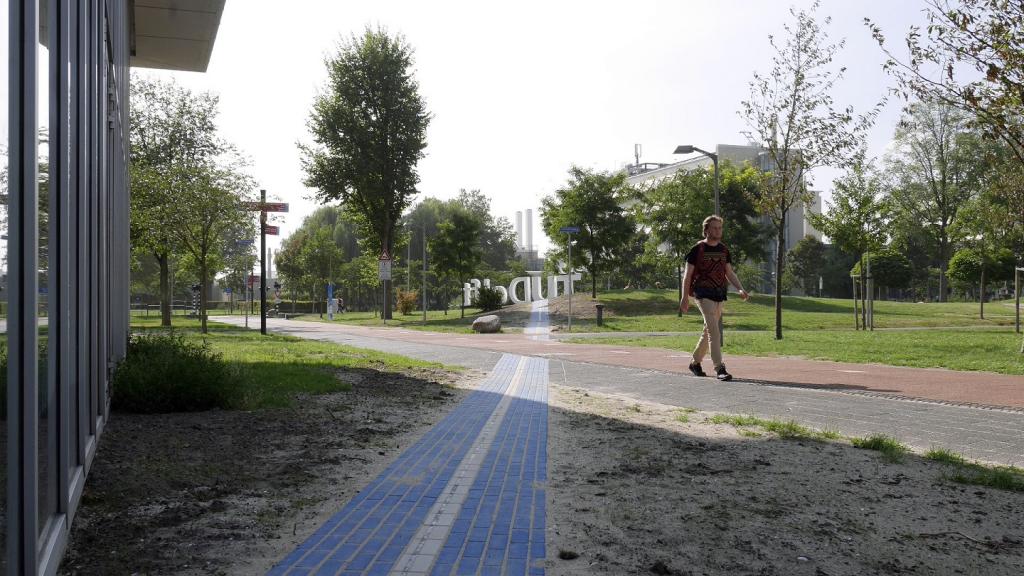 At the centre of the blue line is a white band containing a 16-millimetre-wide black line, which indicates the position of the 52nd degree of latitude on 1 January 2018. For anyone thinking of measuring it: it is already no longer in the same position. ‘The width of the black line represents the shift per year’, explains Hanssen.

Time effectTo illustrate the time effect, six grey lines have been painted parallel to the blue line. These grey lines indicate significant events related to Delft events. The first line is 2.79 metres to the north, and marks the foundation of TU Delft in 1842. The following three lines represent events in the Golden Age:

The fifth line is 12 metres from the blue line: this was the position of the 52nd degree of latitude in 1246, when Delft was enfranchised. The final line, at a distance of 32 metres, indicates the start of the Western calendar era: the year 1. Explanatory signs will be installed soon. ‘The idea is that if you now start studying here and complete your course within the nominal study period – so, a three-year Bachelor’s and two-year Master’s – the line will have moved 5 x 16 millimetres = 8 centimetres’, says Hanssen.

Hanssen will present a film about the project at the official opening of the line, for which a few recordings were made yesterday. He asked Mark Bemelmans and Rianne Broeksma, his Geoscience and Remote Sensing Master’s students, to run a temporary blue line over Professor Van der Hagen’s desk. You see, the imaginary line runs directly across his conference table. 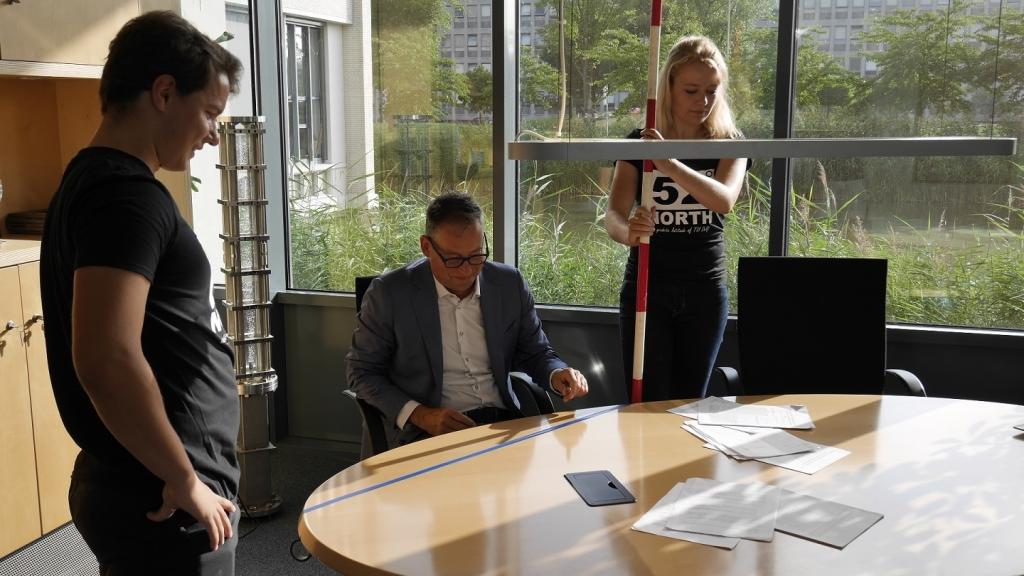 Bemelmans subsequently walked into the pond next to the Executive Board, the water coming right up to his middle, to show how the line would proceed from the reeds on the waterside. 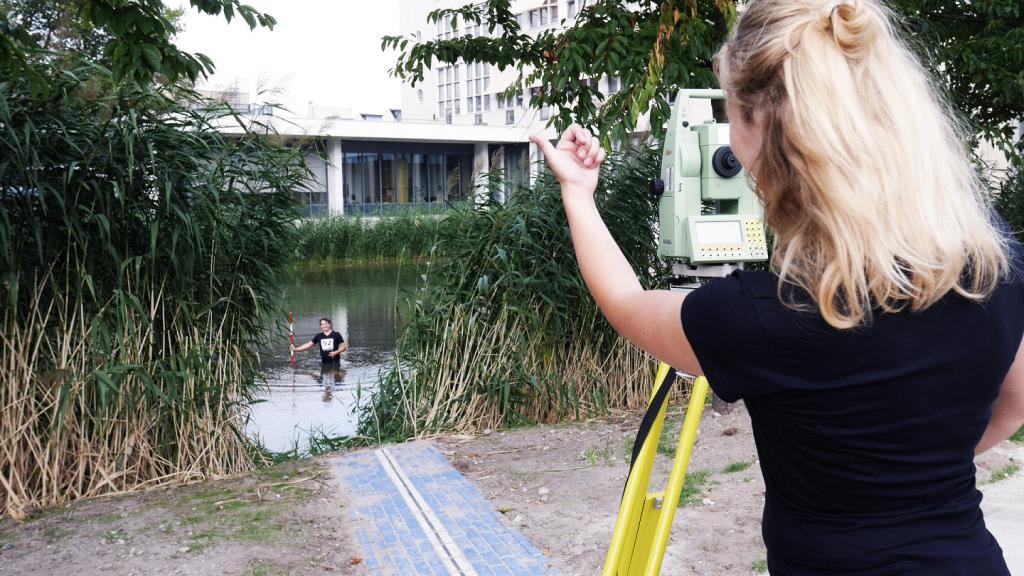 What now? Hanssen says that some new ideas are being thrown around, such as continuing the line in the carpet. Or even over the roof, to make it visible on Google Maps. Another idea is for students to be able to write their name next to the line when they graduate, inspired by the ‘Sweat Room’ at Leiden University. Time will tell how many centimetres that will take.