What has two-and-a-half years of Diversity Office delivered?

Now that the first TU Delft Diversity Officer has announced his departure, two questions arise: what has the action on diversity delivered and what happens now?

Professor Rinze Benedictus started working as the Diversity Officer in 2017. Apart from one incident that firmly put the subject of diversity on the TU Delft map, he largely enjoyed quiet times. Delta spoke to him and Martijn Blaauw, Deputy Secretary of TU Delft and Head of both the Integrity Office and the Diversity Office, on Skype.

Has TU Delft become more diverse over the last two-and-a-half years?
“That is really hard to measure,” says Benedictus, “as you do not register a lot of information about employees. Take the participatiewet (Participation Act) for people with a disability, for example. We can only count the people who themselves have registered at the UVW (Employee Insurance Schemes Implementing Body). TU Delft does pay serious attention to diversity and inclusion, for staff and students alike. Education and Student Affairs has a lot of people supporting students with a disability.”

Blaauw continues. “Measuring inclusiveness is tricky. You can be a very diverse community, but be completely non-inclusive. By ‘inclusive’ I mean that we work together to get things done and that we involve each other in decision making, ideas or committees, each individual bringing his or her own perspective to the table. We do not want anyone to be excluded, either intentionally or unintentionally. If everyone makes a contribution, the organisation will be stronger.”

‘The Nashville Statement was a blessing in disguise’

How do you know if anyone is excluded? Isn’t the problem that they are invisible?
Blaauw explains that “We need to enhance awareness so that we do see the blind spots. What would help is the diversity training that TU Delft offers. You learn how to look at yourself: how was I brought up; what are my blind spots; what social circles do I move in? All of these colour how you look at the world.”

Have there been any important successes over the last few years?
“A couple of months ago, I would have said it was turning the diversity office from a virtual office to a physical office where people could drop by,” says Benedictus (due to the corona crisis, this is temporarily not the case, eds.). “Another is that diversity and inclusiveness are explicitly named in TU Delft’s strategy as a part of its Integrity Policy.”

At the beginning of 2019, it transpired that a TU Delft professor had signed the Nashville Statement against the practicing of homosexuality. This led to a major backlash. Looking back, what do you think of that time?
“The Nashville Statement was painful,” says Benedictus, “but it was also a blessing in disguise as it triggered a discussion about where to draw the line in practicing one’s freedom of expression. Is it acceptable to state your opinion and in doing so hurt others? How strongly may you express your opinions and when should you say sorry? I believe that we should apologise more often, and accept the apologies of others more often.”

‘We need to not think in terms of victim and perpetrator’

Should this campus be a safe space, like students at American universities sometimes demand?
“A work and academic environment where people feel safe to express themselves is certainly important. You also need to make people resilient,” says Benedictus. “This is a very rational institution in the sense that good argumentation will get you further. The only thing is, is that not everything is rational. To say that ‘you may not step on anyone’s toes’ is not realistic. If it is done intentionally, time and time again, you can step in. If this happens, people need to make it known, and make it a point of discussion. We need to train each other and not think in terms of victim and perpetrator. There is enough legislation to deal with serious situations should they arise. Inclusiveness is a grey area where there are no victims and perpetrators, but where there are simply different kinds of people.” 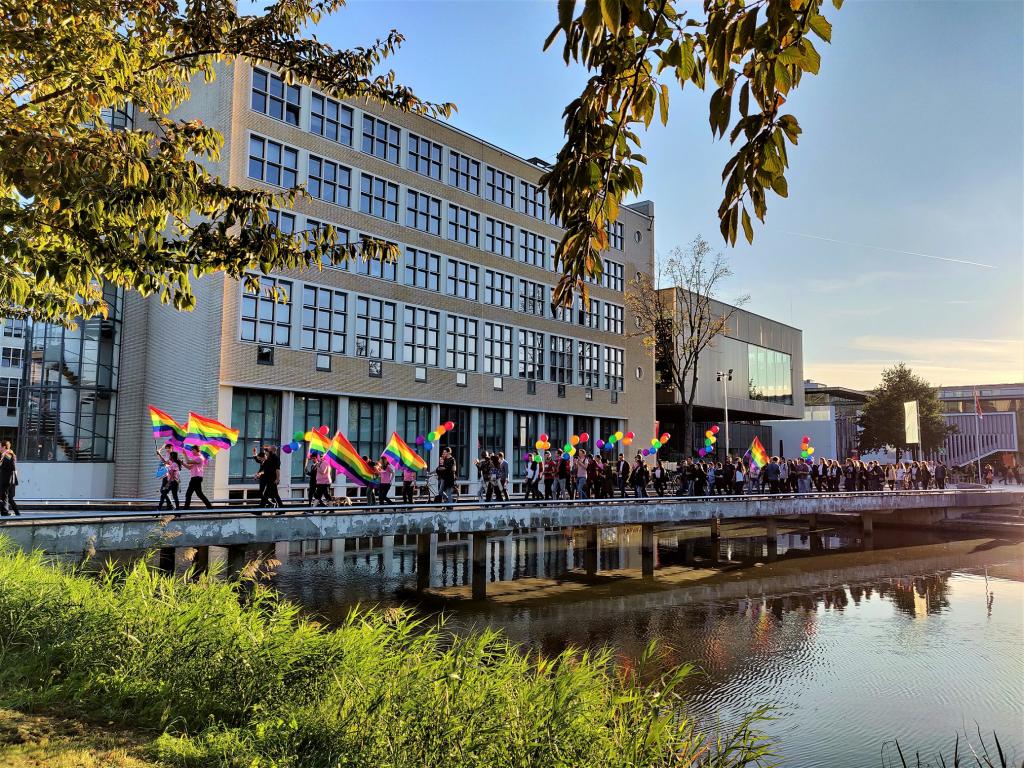 There are huge protests at the moment about ‘institutional racism’. Does institutional racism exist at TU Delft and if so, in the light of these protests, is TU Delft doing anything else to deal with it?
“It is good that attention is being paid to racism around the world. Discrimination of any kind is unacceptable. It is hugely important that we can openly discuss it at TU Delft. Only by talking about it with each other, by daring to ask each other about our views, daring to address each other if we see something going wrong, and by also looking at ourselves and any implicit biases that we may have, can we take a step forward in creating a university where everyone can simply be.”

Do you think diversity a hot topic on campus?
“The discussion around the Nashville Statement was wide-ranging,” says Benedictus. “This is exactly what you need. If you look at the Coming Out Day, it is unfortunately mostly preaching to the converted. The people who come are already fine with homosexuality. Once in a while I see that there is a discussion which I was not aware of, or thought that it had already died down. Right at the start, there was someone who was criticised for starting a scientific career late in life. She said that ‘if you are a university teacher and over 40, you can’t move up anymore’.”

‘Has it worked? No, we are not there yet’

How did you stay abreast of what was happening over the last few years?
Benedictus explains that “I was not alone. I worked with Sarah Benschop (former HR Advisor, no longer working at TU Delft. A recruitment process is underway to find her replacement, eds.). She was instrumental in setting up the Office. I also had a team of volunteers from all over TU Delft. I could brainstorm with them well.”

Why didn’t you use clubs such as Dewis, TrueU or TU Delft Feminists for this?
“Groups like Dewis and TrueU have certain interests. This is good and completely understandable, but we also needed variety so that we could prepare for discussions on other aspects of Diversity and Inclusiveness (D&I),” says Benedictus.

How can ‘ordinary’ staff members widen their views?
“Many management teams and faculty staff do diversity training,” explains Blaauw. “This helps you become aware of your leanings and biases.”

Benedictus continues. “This type of training is a standard part of the training of senior scientific staff. It is also given in the Graduate School.”

Is it enough?
“Never,” says Benedictus. “It is a continuous thing and you always need to stay alert and continue to monitor things. TU Delft is working on this seriously, for example it is working to recruit more women on the scientific staff team. Has it worked? No, we are not there yet.”

‘I have never had a door closed in my face’

Recruitment is underway for the new Diversity Officer. What kind of person should this be?
“I am not someone that immediately jumps on centre stage. We don’t need an activist, but this subject does need someone who can act on the forefront of things,” says Benedictus.

Blaauw adds that “Our preference would be for someone from the organisation itself. Someone who feels the culture and knows what’s going on and the sensitivities.”

Why did you think that this subject was your thing right from the start?
Benedictus says that “I did not even ask myself if I was the best person for the job. I thought, and still think, that it is important that there was a position like this. TU Delft is an elite club. You gain access through a selection process and once you are in, you should be able to have the TU Delft feeling. I like difference. As a community, we enter into discussions, like challenges and going off the beaten path. It’s in our DNA to see the limitations and then exceed them.”

Is it not so that problems should be discussed publicly? After the Nashville Statement incident, not much came out, and this is also the case in the movement against unwanted sexual behaviour #metoo.
“I don’t believe that this is always needed,” says Benedictus. The fact that #metoo exists shows that the subject is drawing the attention it deserves. Apart from that, I am also confident that TU Delft would take action should there be a structural issue somewhere. This is different to exposing individual cases to the public. We need to look at the culture. If someone describes TU Delft as a loutish, masculine culture, I can see what they mean to some extent. We need to do something about this, but I have never had a door closed in my face when I raised difficult subjects. Quite the opposite, in fact.”

‘I think it’s great to make education a priority’

As one of the first Junior Lecturers at TU Delft, Astrid van der Niet is contributing to education in the Faculty of Mechanical, Maritime and Materials Engineering.
Campus

All universities in the Netherlands have their own journalism platform. A legacy of the 1960s, Ries Agterberg of Utrecht University news website DUB, points out.