What of the future of EEMCS?

Demolish the EEMCS? The Cuypersgenootschap and Docomomo Netherlands see possibilities for the sustainable refurbishment of the building.

‘Een toekomst voor Elektro, behoud door ontwikkeling’. ‘A future for EEMCS, preserved through development’ is the title of the pamphlet that the Cuypersgenootschap and Docomomo Netherlands foundations sent to TU Delft and the Municipality. The foundations sketched their ideas of how the building, which TU Delft is planning to demolish, can be given a new lease of life. 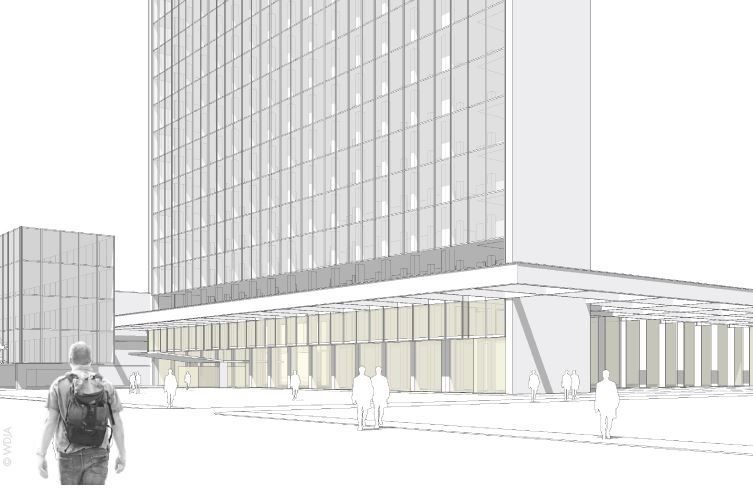 A canopy beneath the third floor could act as a transition to new functions in the plinth of the EEMCS building. (Illustration: WDJA Architects)

For the upper part of the building, the foundations suggest the following.

The organisations have done a preliminary calculation. If the living spaces would be rented for 20 years at EUR 400 per month, this would create investment opportunities of about EUR 35.9 million. The calculation also allows for the upper part of the building’s 24,750 square metres, which would include the third and top floors, to be renovated for EUR 1,450 per square metre. Another option is combining office space with living space instead of having 17 floors dedicated to living space.

Lecture rooms
DUWO’s branch manager, Michiel Ensink, previously told Delta that converting EEMCS into student housing would be very expensive. In a response to the figures above, he said that these were indeed the amounts estimated, but that “this is only part of the story. They do not take into account that TU Delft would have to build additional lecture rooms.”

Docomomo Netherlands’ Quist concurs. “TU Delft has said that its preference would be for demolition. In this case, our rationale is that TU Delft has removed the building from the financial books and the building then has ‘no value’. You can then start from zero in terms of the material and building. Everything that you invest only needs to be earned back through the rental or sale or use of the spaces. In terms of the calculation, it then does not matter if the spaces are used for housing or for education.”

Last  year, the Executive Board decided to give preference to new buildings behind the EEMCS and on its current spot. “There is still space behind EEMCS and TU Delft has much ground in its possession,” says Quist. “I think that there are enough possibilities to create these spaces if they do not fit in the building. Apart from large lectures, almost all the teaching can be done in this building if this would be the preferred option.”

The façade
The façade really needs work, admits Quist. But he refers to the calculation. “This amount would then be invested and would generate almost EUR 1,500 per square metre. You would not need this for only the interior. A significant amount would be left to invest in the façade. This would also give TU Delft the potential to promote itself as progressive as it could be an energy neutral – or energy producing – building.”

The Cuypersgenootschap and Docomomo Netherlands suggest keeping TU Delft’s own successes in mind when renovating the façade. TU Delft could, for example, form a D:Dream-Team to work on a circular project and energy producing façade that could tap into the wind and sun. They believe that TU Delft is socially responsible for maintaining its own built heritage. “Think of re-use, the circular economy, the energy transition. All the knowledge needed is here and there are many engineers who would jump at the chance.”

The Executive Board has been asked for a response.

The murdered Iranian Mahsa Amini was remembered in two gatherings in Delft, one of which was on campus. Delta spoke to one of the organisers, who had also been arrested.
Campus