Walking to Zimbabwe and cycling to Saint Petersburg

Students and staff at the Material Science Engineering Department are currently walking, running and cycling thousands of kilometres for a good cause.

More than 4,500 kilometres from Delft, a group of TU Delft students and staff are into their third day of walking through the Sudanese desert. The heat is terrible and the desert seems endless. Their GPS says that there are still more than 300 kilometres to go to get to the capital city of Khartoum. One of the group members starts thumbing a lift. Before long a big jeep stops.

It is late evening when they arrive in Khartoum, back in civilization again. They do not have the time to enjoy the city as they have to leave again for the Ethiopian border the next morning.

Ultramarathon
A trip like this would be amazing, but it’s not reality in these times of corona. The trip is part of an Ultramarathon. 76 students and staff from the Material Science Engineering Department (Faculty of Mechanical, Maritime and Materials Engineering) walk, run and cycle a number of kilometres for two months every day. They are doing it in their own familiar environment, enjoying a virtual trip together. “We walk from Delft to Victoria Falls in Zimbabwe and cycle through Europe,” explains Sietsma. “The cycle route goes through Lisbon, Rome, Sarajevo and Saint Petersburg.” Both groups started on 9 November and hope to finish their trip on 3 January. “We will then celebrate the end of the trip during the New Year Coffee on 4 January,” says Sietsma.

‘It has a positive effect on our mental health’

Sietsma’s idea got dozens of colleagues and students moving. “The Ultramarathon has three important goals. We do something together; encourage people to move more; and support a good cause.” The participants collect money for every kilometre. The money goes to WAAW, an organisation that enables women in Africa to access science and technology education. 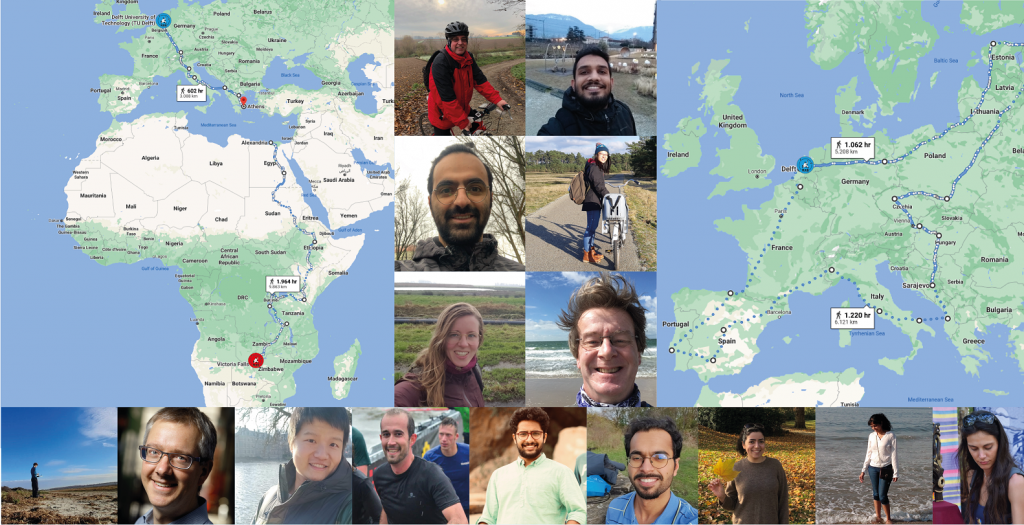 Proud
These were important reasons for postdoc Biswanath Dutta and Assistant Professor Poulumi Dey to take part. “By exercising ourselves, we help women in Africa to become influential leaders of tomorrow,” says Dutta. “The event also helps us maintain a healthy life-work balance,” Dey adds. “It has a positive effect on our mental health and this is hugely important, especially during this long pandemic.”

Colleague Ellen Vendrig sees more plus points. “Nobody can travel at the moment, but this gives you the feeling of travelling.” She is proud of her department’s efforts. “It’s so amazing that all of us are doing this. And that our colleagues are moving more now than before is a really good thing.”

Dedication
The staff note the number of kilometres they do in a joint Excel sheet. Sietsma reads them every day and sees where they are that day on Google Maps. The participants are updated on the route by email. “We are keeping a diary about our experiences. We add the front page of a local newspaper every day and say what we can see along the route.” At first, Sietsma did all the updates himself, but two students are doing it now. “Their dedication is wonderful and some people are working really hard on this. Some PhD candidates have designed a logo and update our Facebook and Instagram accounts; another colleague is doing the Twitter account; and we regularly receive photos of beautiful scenery or sunsets from people en route.”

‘Some are cycling up to 60 kilometres a day!’

There is no question of competiveness, says Sietsma. “I had hoped that there would be more competition between the cyclists and walkers, but this is not the case as almost all the participants are both cycling and walking.” They are eating up the kilometres, he says. “Some of them are doing quite long distances. Some are cycling up to 60 kilometres a day!”

Donations
The participants’ kilometres are being sponsored. “The Department is donating 20 cents per kilometre which will roughly amount to about EUR 4,000 in total as we plan to trave; 20 thousand kilometres,” says Sietsma. WAAW recently put the event on its website so that people can donate online too. “We have not yet received many donations, but we hope to double that EUR 4,000.”

In the meantime, the group of walkers has left Sudan and are on their way to Addis Ababa. An online gathering with WAAW staff is planned for 11 December. “We will talk about their work for education for African women and our reason for doing the marathon,” says Sietsma.