The facade is a reminder of the wooden cabin that housed the perfume factory. (Photo: Jos Wassink)

Just imagine: TU Delft will honour the founder of the Gist en Spiritusfabriek with a museum, the Museum Van Marken. What should it look like? Here are the best ideas.

Last month, 30 students submitted models of their vision of an imaginary museum for someone who was of great importance to the city: Jacques van Marken.

Van Marken was the founder of Calvé, Gist-Brocades and DSM. He was the first industrialist to build a green factory district for the employees, the Agnetapark. Van Marken was an extremely social entrepreneur who also arranged accident and health insurance for his staff, which was almost unheard of at the time.

TU Delft alumnus Jan van der Mast wrote a biography about Van Marken (‘the first social entrepreneur of the Netherlands’) and four years before that, one about his wife Agneta van Marken-Matthes. Van der Mast is a tireless advocate for more historical and cultural awareness about Delft industry in general, and for a Museum Van Marken in particular. He believes that a good site for a museum would be the empty plot at the end of Phoenixstraat. 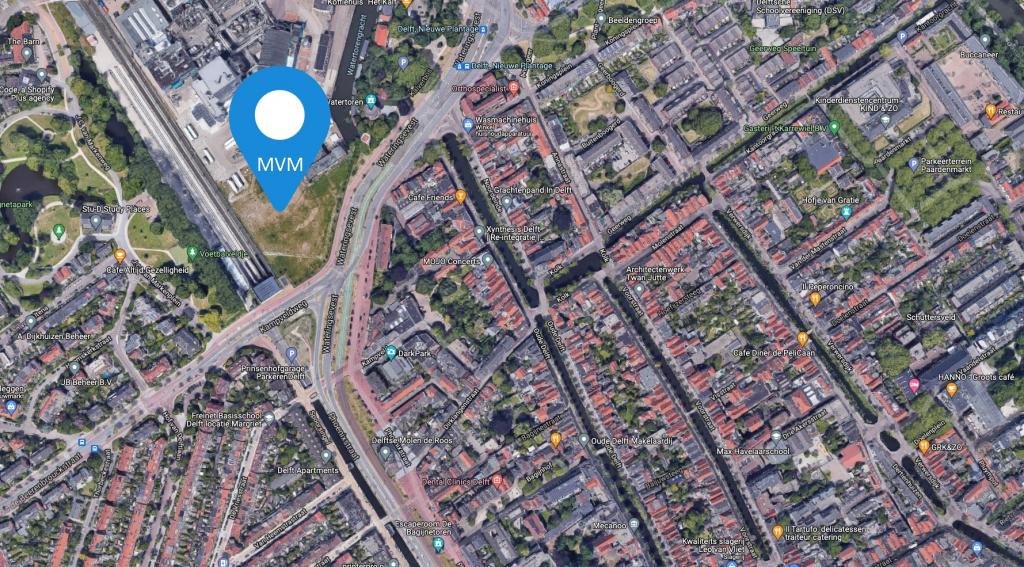 This empty spot at the end of the Phoenixstraat would be the ideal location for the Van Marken Museum (Image: Google Maps, adaptation: Jos Wassink)

Architecture lecturer Geert Coumans took the idea of a Museum Van Marken as the starting point for his design studio. It involved an assignment in which master's students in architecture spent some of their six months’ stint working on a detailed model. "The site at the end of Phoenixstraat has a lot of history," says Coumans. "The old taproom of the yeast and spirit factory is still there, with the water tower and pump building on the other side."

In addition to the story about Jacques van Marken, the museum should also house an exhibition about fragrance and perfume linked to Agneta. The students also had to deal with sustainability requirements. The materials had to be as circular as possible, and for heating they were referred to Ben Bronsema's energy neutral air conditioning system, which requires a lot of space.

According to lecturer Coumans, the three best solutions were the following. 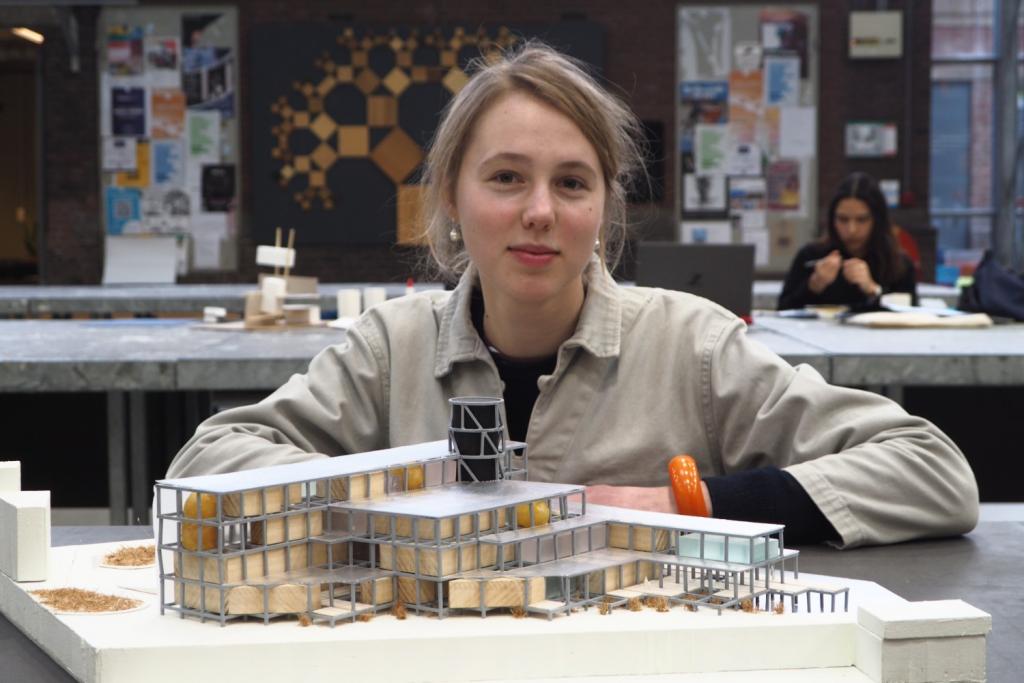 Linde Varossieau: “The title Four Squared refers to the multiplicity of the building. The main structure is a grid of four-by-four metres which can grow or shrink. Modules can be added to or removed from the main wooden structure. There are three features: wooden modules, polycarbonate corridors, and inflatable rooms. The flexibility of the modules is shown in the detailing. For example, the wooden modules are held together by nylon straps. The entrance to the building is a tiny door, which is accentuated by the large façade. It evokes the feeling of being a worker in the factory. The front façade is covered by a curtain. Shadows of modules and translucent material colours are projected on it as the sun shines from behind, creating curiosity.” 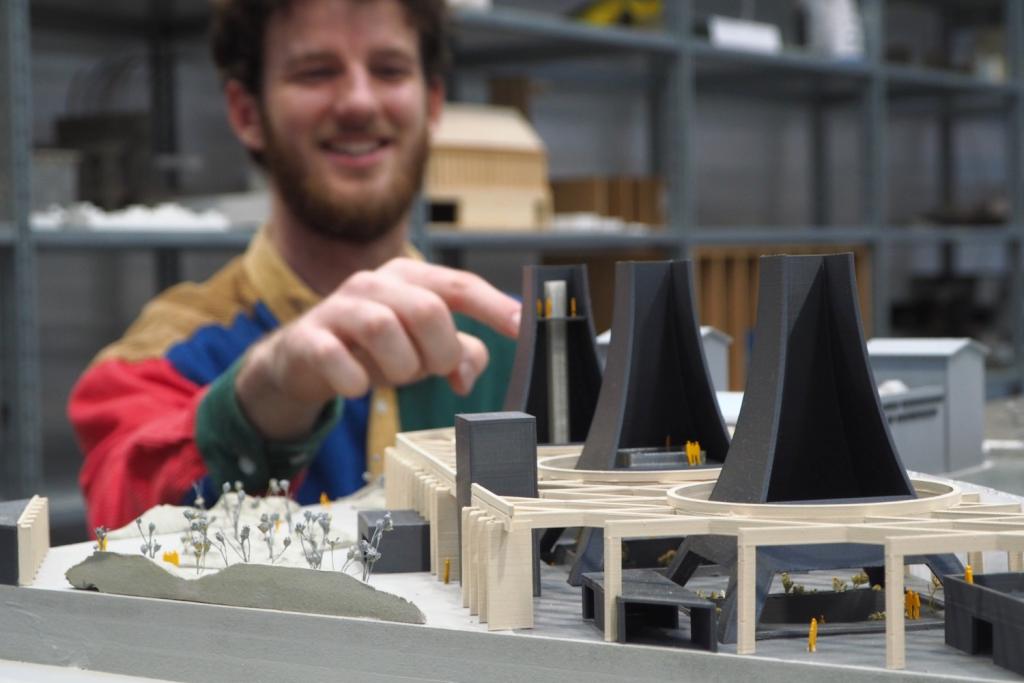 Daan Doelman: “I found the idea of a perfume museum a nice challenge. How do you make such a small experience big? From the city, you come to the museum via a footbridge. Through the semi-transparent wall with old advertising drawings by Jan Toorop, you see visitors walking through the museum. I chose to collect the ingredients of the perfume in the museum. The energy neutral air conditioning system, Earth Wind & Fire, creates an air movement through the building up to the air shafts. At the top of the shafts, the concentration of aromas is at its highest and you can smell the entire bouquet of the perfume. The building thus becomes an experience.” 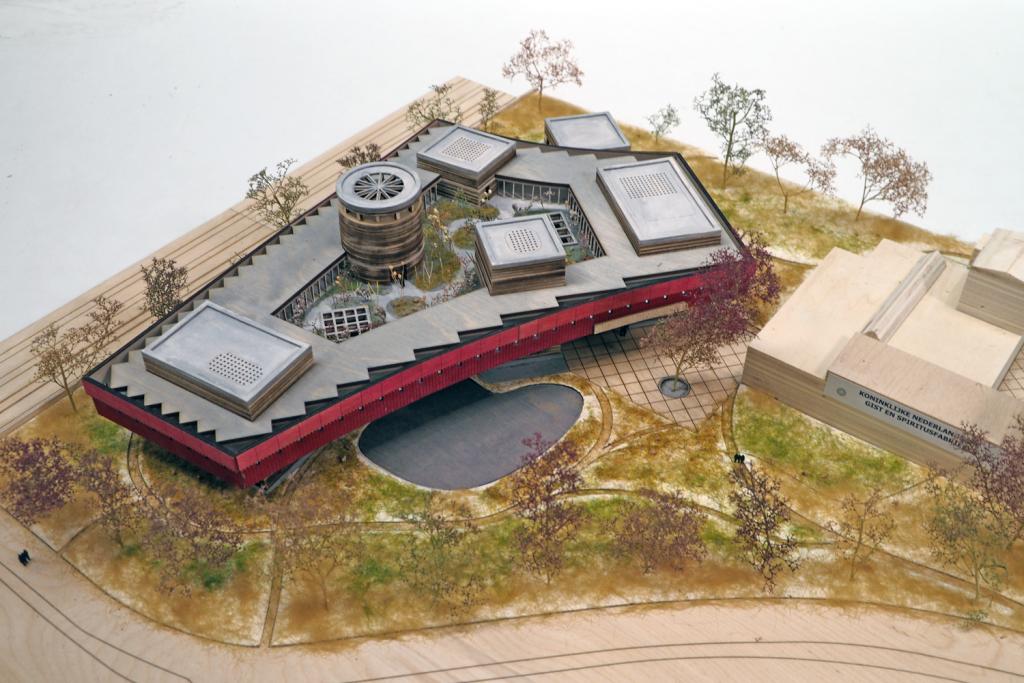 Mikolaj Cichocki: “The Canopy stands as a monument proving that there is a place for light in the heavy, warmth in the solidity, and sensual perception in the analytical mind. A unified mass whose shape accommodates both the site and the axis of the city, was lifted from the ground, resting on five structural rammed earth cores. Symbolically rising from the ground that it is built of, the floating light wooden pavilion housing the exhibition space evokes the first perfume factory of the Van Marken family. Feats of material expression were shaped in accordance with their very character, influencing the sensual and intimate layers of the experience. This was made possible by keeping model making at the heart of the entire design process, of which I am very proud.”

Taproom
In all honesty, the likelihood of a new building for a Museum Van Marken does not seem great. Who would finance and operate it? If there was to be an exhibition about the Van Markens, the still existing taproom would be a more likely place, Coumans thinks.