This year’s remembrance of the student strike had an unofficial character. (Photo: Sam Rentmeester)

In November 1940, hundreds of TU Delft students went on strike against the Nazis when the Jewish professor Joseph Jitta was suspended. There was a small remembrance on Monday.

The remembrance ceremony was held at the plaque that honours the student strike of 25 November 1940. The strike was the initiative of activist Arthur Graaff. A handful of people attended the remembrance, two of them on behalf of the Delftsch Studenten Corps. A descendant of Joseph Jitta was there too. TU Delft and the Municipality did not attend. Since 2016, TU Delft has organised the Van Hasselt lecture every 23 November, but that t was not held this year because of corona.

What happened in November 1940 at TU Delft? The plaque on the Oostplantsoen states (translated from Dutch): ‘In this former building of the Delft Technical University of Applied Sciences, on 23 November 1940, hundreds of students gathered to protest against the suspension of Jewish teachers by the Nazis. It was the first large protest in the Netherlands against German occupation (1940-1945).’

History books tell us how all Jews in government service were suspended on 22 November 1940, including the Jewish teachers at the Delft Technical University of Applied Sciences as TU Delft was then called. The following morning, a Saturday, hundreds of students gathered for what they believed would be the farewell lecture of the popular Jewish professor Joseph Jitta.

But Jitta was not there. Frans van Hasselt, Chair of the Practische Studie (practical studies) study association held an improvised speech in which he spoke about the ‘dismay and deep sadness’ among the students. It was here that the idea of a strike took shape among the audience.

While the Rector tried to prevent the strike the next day, the lecture hall seats on 25 November were virtually empty. Leiden too went on strike on 26 November and the Nazis put an end to teaching and exams in both cities for an undetermined time. Lectures resumed in Delft in April 1941.

Four months later, on 24 August 1941, during a round up of student strikers, Frans van Hasselt was arrested. He died of the harsh conditions in the Buchenwald concentration camp on 10 September 1942.

Where did that wreath come from?

Those present at the memorial of the student strike on Monday evening 23 November found a flower wreath near the plaque where they also wanted to lay flowers. From whom it came was not mentioned. Ilian de Snoo, chairman of the Practische Studie study association, now informs us that the wreath is from his association. ‘Since this is an important event in the history of the study association, we too have commemorated this day by laying a wreath for Frans van Hasselt and his friends’, he e-mails. The students did this together with alumnus Duco Drenth, who turns out to have researched the life of Frans van Hasselt over the past few years. De Snoo finds it ‘of great importance’ that ‘visible attention is paid to the history of the associations and TU Delft’. 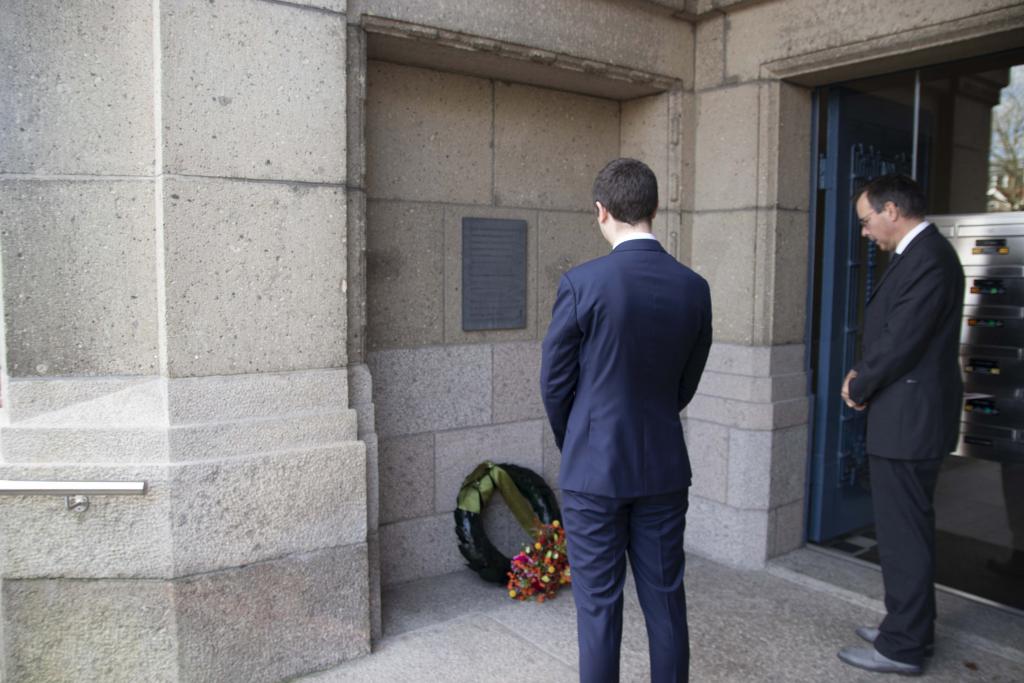 This is what the new Dream Teams should look like

Few Dream Teams will return to the Dream Hall next academic year. Who wants to and may stay, and who will leave, voluntarily or not? New guidelines will bring major changes.
Campus

Should students and staff have more of a say?