The Solar Boat students will present their new design Tuesday evening 21 January. This year’s challenge is to be more efficient with energy.

On a rainy Friday morning in January the D:Dream Hall for student projects is full of life. In the Solar Boat office, the 20 member team is busy preparing the design presentation on Tuesday. They are working on 3D models of the boat and enter the latest design details into the computer.

Expectations of this TU Delft student team are high. In 2019, the Solar Boat was world champion on open water in Monaco. This year they are entering a different competition. Financial manager Melissa Oremans explains. "We became world champions long distance sailing on open sea. That required a different design and is a different class than the one we are competing in now." This year the team is competing in the Solar Sport One Competition. This race consists of three parts: agility, speed and endurance. All these have to come together in one solar boat.

The students then show a gigantic boat with a nine square metre sundeck. This is not the new design. "This is an older model," says Oremans. "It‘s too risky to use the new boat for demonstrations." It now only exists on the drawing board. "We’re building on the knowledge of previous years. Sometimes it means that parts can be reused.”

Rules
The largest adjustment this year is the sundeck, explains exposure manager Ruben van Es. "The maximum area may only be six square metres.” Oremans adds, "Otherwise the competition will be about who has the largest sundeck or who can invest the most money. The real challenge is to make the system as efficient as possible."

Three struts
The struts help. Struts are the aluminium attachments that connect the hull of the boat to the hydrofoils, lifting the boat out of the water at speeds exceeding 20 km p/h. Air resistance allows the boat to sail more efficiently than water resistance. After a brief discussion as to whether this information can be shared, Van Es explains that "this year we are going from two struts to three struts.” That's all the team members want to reveal before the official presentation.

The production of the new Solar Boat starts immediately after the presentation. The first test on water is in March. Van Es says that “It is very soon, as our first race is on 18 May in Purmerend.” After Purmerend is the National Championship in Akkrum and races in Dordrecht and Monaco.

One team, one task: how to build a team

Continue reading below the picture. 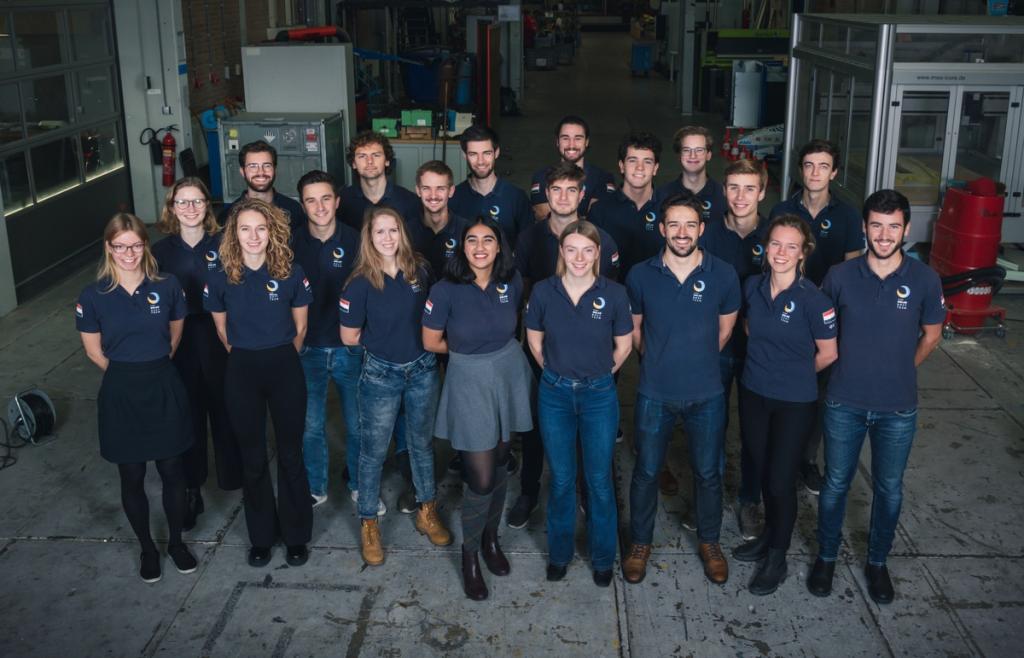 The Solar Boat team has won many awards in recent years. How do 20 students from different faculties forge a successful team?

Melissa Oremans, financial manager and aerospace engineering student says "you need common goals to work towards. Our goals? To win races and to get the maritime sector enthusiastic about this sustainable way of sailing." What students need, believes Oremans, is intrinsic motivation. After all, students receive no credits and no salary while working more than 40 hours a week. "If you work that many hours together, you become a close-knit team."

Exposure manager and student industrial design engineering Ruben van Es says that one of the most important contributors to a close-knit team is working simultaneously. "Everyone starts together in September and finishes in the summer."

Further, communication is important for the team. Of course there are irritations every now and then. But you can learn from them by discussing them openly, says Oremans. The team captain takes on the role of mediator if there are differences between team members.

The roles in the team change throughout the year. The team starts as a design team, subsequently it is a production team and at the end of the year a race team. “This means that everybody is important throughout the year,” emphasises Van Es.

TU Delft and US scientists discover ‘hallmark of coexistence’

What prevents extinctions in a competitive world? Biologists have wondered for centuries. Now scholars found that it involves a doughnut shape and a scorched earth strategy.
Science

A new study shows that methane emissions from oil production in the US can be observed from space — a major improvement over measurements from previous satellite instruments.
Science

Breaking bridges to understand them better

Every year inspection engineers check bridges for corrosion or cracks. But a visual inspection takes up a lot of time. Is there a more efficient way of doing it?
Science

The world’s largest glacier, Antarctic’s Pine Island Glacier, spawned an iceberg of over 300 square km – twice the size of Amsterdam - that very quickly shattered into pieces.