TU Delft master under fire for ‘disinformation about climate change’

Are TU Delft students being given misleading data about the climate? A climate researcher accuses the Shell sponsored Offshore Engineering Research Group of cherry picking.

‘It has been proven time and time again that internal variations, volcanic eruptions and solar cycles do not account for the current global warming’, writes climate researcher Arthur Oldeman this week in a series of tweets that are causing quite a stir. To his irritation, he sees that these factors have been given a leading place in one of the slides in the Environmental Issues and the Arctic lesson which is part of the 3mE Arctic Offshore Engineering module. They even take precedence over the human impact on the climate.

If information about climate change is presented this way, there is something seriously wrong at TU Delft, asserts Oldeman, a PhD candidate at Utrecht University’s Institute for Maritime and Atmospheric Research (IMAU) that works on climate modelling. He sums up his objections in a series of 23 Tweets.

‘The slides are full of climate misinformation and use well-known means of sowing doubt’, writes Oldeman. Oldeman (@merlijn_o) observes that the suggestion is that climate change is still a subject of debate between supporters and detractors. In doing this, the teacher circumvents the broad scientific consensus on this issue.

A student at the IMAU laughingly pointed out the lecture that a fellow student attended at TU Delft to Oldeman. “I thought that creating confusion about this was a thing of the past,” says Oldeman. “At the same time, I thought it sad that something like this could be said at TU Delft given that it goes against its own climate goals.”

Oldeman also points to cherry picking (only showing data that proves your point) and the repeated use of outdated data, such as pre-2000 data. More recent data show a much more serious picture of climate change, such as data on the quantity of Arctic ice loss that reached a new low last autumn. 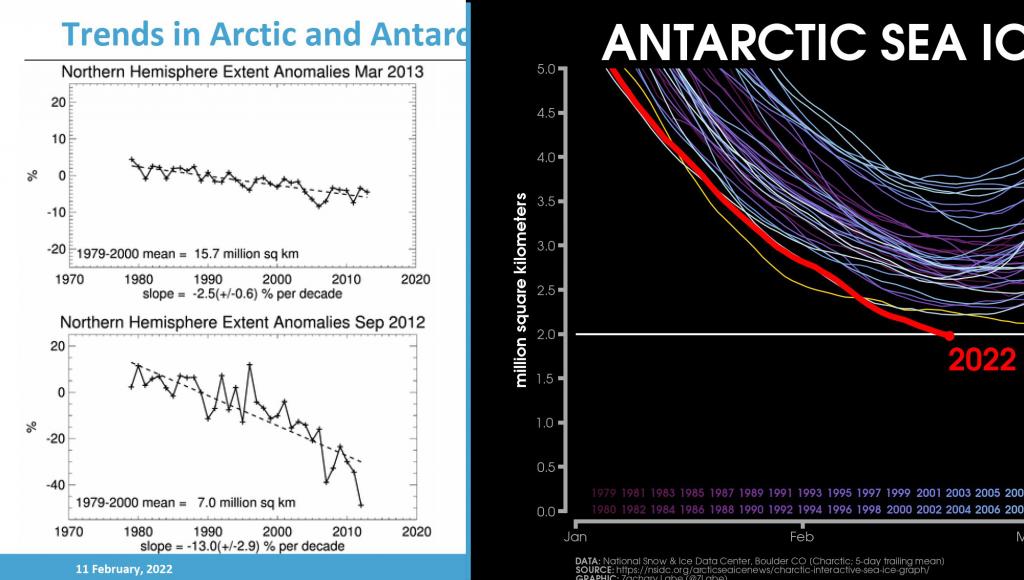 Trends in North Pole ice cover according to the lecture (left) and according to NOAA (right). (Images fused by Delta)

Another thing that also does not help is that the teacher in question, who did not wish to respond to Delta’s questions, works at the Offshore Engineering (Faculty of CEG) Research Group which, according to the website, is sponsored by Shell.

‘This is not worthy of a university’

Oldeman was praised (in Dutch) by Jan Rotmans, Professor in Transitions and Transitions Management at Erasmus University. He wrote ‘Disinformation about climate change is taught at @TUDelft in the year 2022 by an associate professor who is part of the Offshore Engineering group that is co-sponsored by Shell. It is high time to stop the dissemination of this scientific claptrap’.

And praise from weatherman Gerrit Hiemstra who wrote (in Dutch) that ‘It is a great disgrace for @tudelft that disinformation about the climate appears to be shared in lectures. This is not worthy of a university! I hope that action will quickly be taken to redress this.’

TU Delft responded quickly on the official @TU Delft account: ‘This indeed does not seem to be in line with our position on #ClimateAction across TU Delft. We are looking into the issue’. And a little later: ‘The @merlijn_o thread makes it clear that the slides do need updating. That is now being done in consultation with the research group’.

Fossiele brandstoffen wel benoemdNone of the gentlemen were present at the lecture. That same lecture was recorded in 2018 by Collegerama. The teacher presented graphics that were not up-to-date but did repeatedly state during the lecture in 2018 that the current temperatures and CO2 concentrations are now higher. He also explicitly stated the impact of fossil fuels. That term, however, as Oldeman notes, is not stated on the slides.

When asked, Pim van der Male, the Coordinator of the Offshore Engineering master, said that the teacher in question ‘is definitely not a ‘climate denier’ and has no intention of expressing this position’.

He also denies the suggestion of misinformation. ‘Some of the slides that were placed on Twitter should be accompanied by an explanation. Slides are only one element in a lecture and should not be seen separately from the explanation of the teacher and the interaction with the students.’

And what about any potential conflicts of interest? Shell does indeed contribute to the research projects of the Offshore Engineering Research Group. Its research is completely geared to offshore wind energy, answered Van der Male. ‘These kinds of sponsorships are commonplace for research groups and are also a precondition for obtaining financing from agencies such as the RVO (Netherlands Enterprise Agency).’

‘The Offshore & Dredging Engineering degree programme primarily concentrates on renewable energy (mostly wind). This will be even more strongly emphasised in the new curriculum and no more attention will be paid to developments in the oil and gas sectors unless in the context of historical reference.’

Universities in particular are pleased with the extra available funding for higher education. Universities of applied sciences and activists do have some concerns.