TU Delft freelancers in trouble because of corona crisis

The coronavirus is not only affecting people’s health, it’s having a huge impact on the economy. Delta spoke to two TU Delft freelancers who are now at home without work.

At lunch time, ‘t Je van het Loket’s orange and white bus is a regular venue for many students and staff on campus. The food truck’s owner, Romy de Lizer, is usually on the free zones on campus twice a week. This won’t happen anymore. “It’s a huge blow. Apart from TU Delft we also work at company canteens and at festivals in the weekend. I’m used to working about 70 to 90 hours a week. And now my partner and I are at home doing nothing. Everything has been cancelled.”

“It’s unimaginable,” she continues, “just recently we had 1,000 people at our foodtruck ordering food. Summer is coming and it should be busy. And now even bookings for June are being cancelled.” Fortunately she does not have too much food in stock. “When the virus started working its way to Europe, we started cutting down. We bought what we needed every day.” 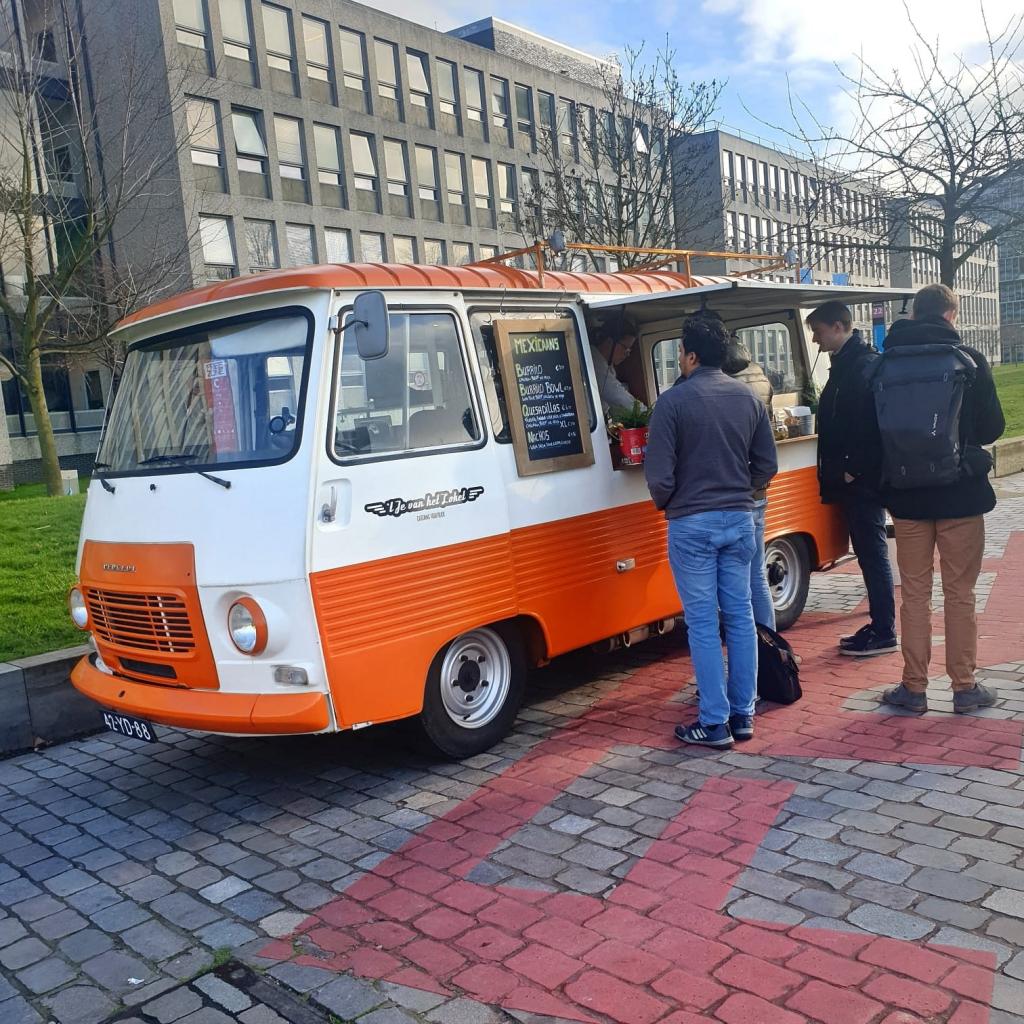 Singing teacher at X
Apart from De Lizer, many other freelancers are now at home. Take Jurith Schols for example. She gave singing lessons at X twice a week and also taught at a primary school. “Now I’m at home with my three children aged 8, 11 and 13. It’s really strange!”

“I’m doing things with my children all day,” says Schols. “My husband also freelances in music. All five of us are now living on top of each other. The mornings are for homework and the afternoons for creative activities such as handcrafts or baking bread. And in the evening we make music together. It’s all very cosy for now, but I wonder how long it’ll remain fun.”

Alternatives
Romy de Lizer has looked into options of keeping her food truck going, but with little success. “We can go and stand in the woods, but we need electricity and water. You’re not allowed to just go and set up wherever you want, you need permits. It’s right that everyone has to stay at home as if we all got the coronavirus at the same time, we’ll all go under.”

“My husband recently gave music lessons on Skype,” says Schols. “I could do that too, even though it does need a completely different approach.” X has already given a stretching lesson on Wednesday through its Instagram account. “We could do something like that too.”

Help from the Government
Last Tuesday, the Government announced that freelancers could receive financial support if they incur problems caused by the corona crisis. “After the previous statement by Wiebes (that freelancers themselves had chosen to take any risks associated with not working in employment, eds.) on the WNL broadcasting service, we hadn’t expected this,” says Schols. “It is reassuring that we can get something, but with three children, it’s not enough to live on. If this lasts a long time, we’ll be in trouble. Still, we’re not unduly worried, we’re living by the day. We wanted to do some renovations in May but have had to cancel them. If we can’t make it anymore, we still have wonderful parents. But I hope it won’t come to that.”

De Lizer too is happy with the Government’s support. “Every little bit helps. The healthy businesses will survive. We have a good relationship with the other food trucks at TU Delft and I’m a bit worried for them. I hope they’ve built up enough of a buffer. Our buffer is also dropping and may eventually be used up. We feel bitter about this as we were saving for a restaurant, a lunch room, a beach bar in a warm country, not to survive a corona crisis!”

De Lizer does not get bored easily. “I can catch up on my administration and do all the jobs that have been pushed aside. But this won’t take three months,” she says. “My partner and I used to work in healthcare. We can help out where necessary. We wouldn’t normally want to do this as we didn’t leave the healthcare sector for nothing. But it feels like you’re an ex-soldier and war breaks out. You wouldn’t just stay at home then either.”

TU Delft is currently looking for solutions for freelancers. It hopes to make a statement at the beginning of next week.

All alone on campus. These TU Delft people cannot work from home

You can hear a pin drop on campus. Not surprising, as everyone is working from home. Aren’t they? These people are still on campus as they cannot do their work from home.
Campus

‘Design for children is what I want to do’

Earning a perfect 10 on her master’s project about helping families of children with heart defects was a nice surprise says Hosana Morales, but it wasn’t her goal.
Campus