In the Times Higher Education World University Rankings 2020 TU Delft drops again. The university falls with 11 places to position 78. This has been announced yesterday.

While the shift is far from seismic, Dutch universities now clearly score less highly than they did one year ago on the British rankings, which look at a range of aspects including academic achievement, reputation and international outlook. This also applies to TU Delft for the second consecutive year. Rector Magnificus Tim van der Hagen reacted disappointed last year, raising the question whether the drop in the number of Dutch universities was due to declining government funding. “University rankings show where you stand in relation to each other. Elsewhere in the world, substantial investments are being made in higher education and research.” 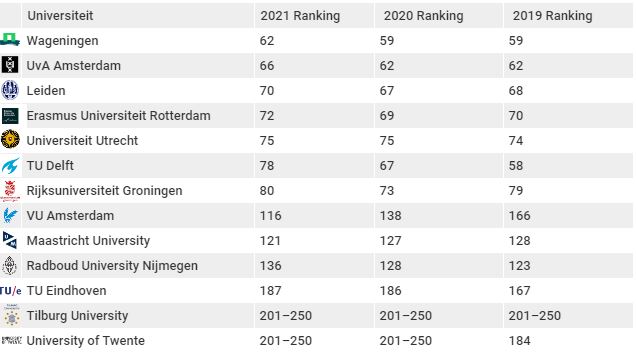 The UK’s Oxford University tops the Times Higher Education World University Rankings for the fifth consecutive year. Cambridge comes in sixth. The rest of the top ten is American, with Stanford taking the runner-up spot.

US dominance
The Netherlands occupies fifth place in the country ranking. With 59 universities in the top 200, the United States continues its dominance in higher education. The United Kingdom has 29 and Germany 21. The only other country above the Netherlands is Australia, with twelve universities, which means that the countries which outperform the Netherlands also outstrip it in size.

One striking development is the progress made by China’s Tsinghua University, which enters the world top twenty this year. As a current trend, THE highlights the advances made by Asian universities in general.

Danger
The danger of rankings like these is that they encourage universities to narrow their focus to aspects that are likely to improve their score. For example, Tilburg University currently has a vacancy for a new member of staff whose task it will be to boost its position on international rankings. In the past, universities have even toyed with the idea of a merger, partly because pooling their resources would earn them a higher score.

And it’s also worth asking whether high scores are always desirable. The Anglicisation of Dutch universities, for example, continues to spark criticism in the Netherlands, yet the THE world rankings reward universities with a high proportion of international students and staff.

Collaboration with the business community is another controversial issue: how can you safeguard independent research, critics wonder, if a commercial party is financing your study? Yet on the THE rankings, high industry income is considered a plus.

And why would a supposedly objective ranking want to include such a vague criterion as reputation? The makers have said in the past that an excellent reputation makes it easier to attract leading scholars and good students, and therefore says something about the quality of a university.

Departing supervisor: ‘What has already been done, is less interesting to me’

Architecture alumna Laetitia Smits van Oyen was a member of the TU Delft Supervisory Board for eight years. How does she look back? An interview with the woman of wild ideas.
Campus

The Dutch government wants to introduce a night curfew that applies until 9 February. The House of Representatives has to agree before the curfew can be introduced.
Campus

Students: more drug use and financial worries due to Covid

Nearly one in three students experience financial worries during the coronavirus crisis, a survey conducted among 1,250 students reveals. Substance abuse is also on the rise.