Where does your guest sleep? Do you have a Christmas decorations box? Two questions that two TU Delft alumni say something about how ordinary you are.

As a bit of fun, three days ago, Martijn Keijzer and Marianne Klement, two former Sustainable Energy Technology students, put ordinariness to the test on burger-punten.nl. After answering 20 questions – truthfully or not – and counting their points, users can see just how ordinary they are. And they can compare their score with their age peers.

And their test has not been unsuccessful. After just three days, it has been filled in almost 200,000 times. “We are totally amazed,” says Martijn Keijzer, “we put it online with the idea that a few friends could do it, but before we knew it, half the Netherlands had filled it in.” The idea for the ‘ordinariness test’ emerged as a joke a couple of years ago. One of Keijzer’s circles of friends often talked about ‘ordinariness points’ and more and more of his friends crossed the ‘ordinariness line’. “There was a growing difference between the students and the graduates in the group,” says Keijzer. So why not devise a test that adds up everyone’s ‘ordinariness points’?

‘I based a lot of questions on my mother’

Over the last year, Klement and Keijzer worked steadily on the site and amended the questionnaire bit by bit. “We did not want to ask people direct questions like do they have children and do they own property,” says Keijzer, “instead we asked them about the little things. Things which you don’t immediately realise show that you are definitely not a student anymore. I based a lot of questions on my mother.”

Friends sometimes made suggestions, one of which is the number of ‘Allerhande’ (a supermarket magazine) recipes you have cut out. “This was suggested by a friend who has a lot of ‘Allerhande’ recipes himself. He has really become very ordinary and is hugely proud of it.” 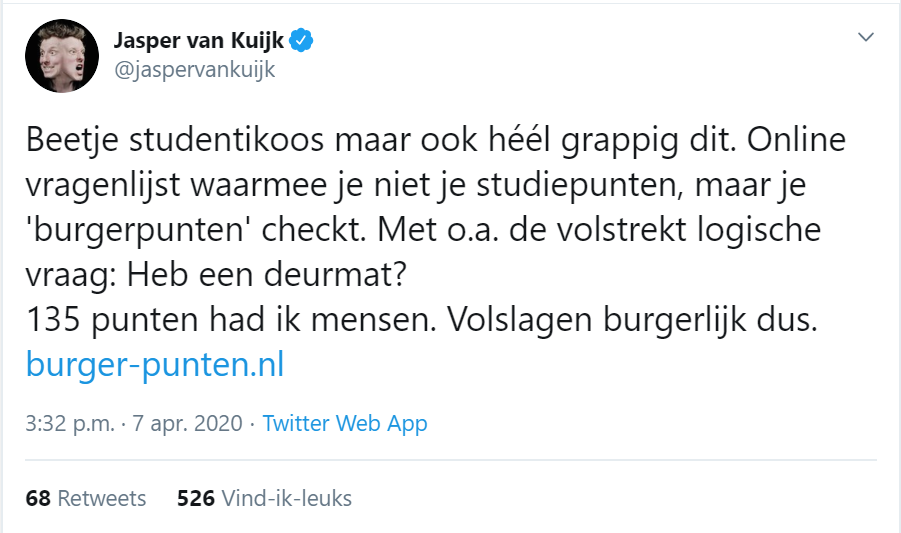 Since graduating last year, both Klement and Keijzer are discovering working life in greater depth. Both have jobs, but they both still live in rented rooms. And you don’t need to ask them for their detailed opinions on mortgage tax deductions or borrowing cake servers because, as Keijzer says, “Cake servers especially are the height of ordinariness.”

So both score very low on their own test. Klement scored 33 ordinariness points and Keijzer scored 9. Keijzer’s score is 10 times lower than the current national average. “But we came up with the questions ourselves so I don’t rule out a bias.”

•    Do you have a doormat and a cake server? Check how ordinary you are here.