Timber construction: a cure for many crises

Last year, architect and Delft alumnus Daan Bruggink received the Golden Frog for the most sustainable building in the Netherlands, an ecological school in Almere. (Photo: Ruben Visser)

Building with wood is good for the climate and the nitrogen crisis. It also accelerates housing construction and more. So why do we see so little of it?

The Second World War was a turning point in timber construction in the Netherlands, notes the Netherlands Institute for Building Biology and Ecology (NIBE) in a report (link at bottom). Postwar reconstruction mainly used concrete, which set the standard. Contractors developed expertise in it and had little reason to look for other materials with which they had less experience and which could cost more. Concrete became the symbol of the new age that supplanted traditional wood construction.

Take the Aula, the bombproof chunk of brutalism in the middle of TU Delft campus. Completed in 1966 with a cantilevered concrete shell weighing over 1,300 tons, this building is a tribute to the reconstruction period, to modernity, and to the concrete that made it all possible. Cement, the binding component in concrete, became the preferred building material worldwide, and it shaped the modern world. The fact that the production of a ton of cement releases a ton of CO2 into the atmosphere is still ignored by governments and industry, states the British daily The Guardian. ‘The cement industry has enriched itself and the world’, writes John Vidal, ‘but now it’s time to pay up.’ For example, by taxing CO2 emissions.

‘These are definitely things that need to be changed in the regulations’, responds Dr Pablo Van der Lugt in the Dutch ‘Het Parool’ newspaper. Van der Lugt is Quartermaster of Biobased Construction at TU Delft and academic guest at the AMS Institute in Amsterdam. “As a building material, wood is currently about 10% more expensive than concrete. But if a realistic CO2 price is charged for concrete, wood would naturally emerge as a sustainable alternative,” says Van der Lugt. Since he published his Dutch language book De Houtbouw Revolutie (The Wood Building Revolution) with innovation consultant Atto Harsta, Van der Lugt has been seen as a champion of timber construction in the Netherlands, with Hotel Jakarta in Amsterdam viewed as a leading example (SeARCH, 2016).

Concrete, steel and glass were the predominant building materials in the second half of the 20th century. Just look around you. The entire Zuidas (a business district in Amsterdam) is a frenzied jubilation of an economy that is detached from its surroundings. But this is changing fast. Climate change is forcing a rethink of materials that emit so much CO2. In their search for building materials with a smaller or even negative climate burden, pioneering architects are now coming up with other natural materials such as wood, flax and hemp. 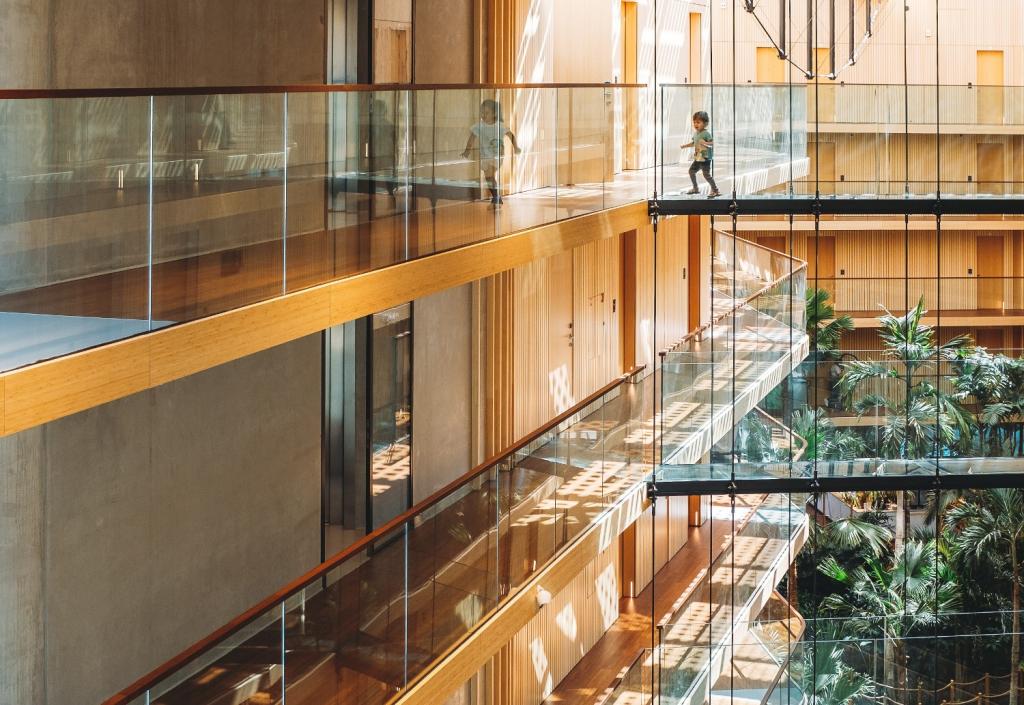 Underestimated
“The Netherlands has long underestimated the potential of timber construction,” observes Professor Jan Willem van de Kuilen, lecturer in Timber Construction at TU Munich. He worked at the Department of Biobased Structures and Materials at TU Delft‘s Faculty of Civil Engineering and Geosciences (CEG) until 2009. But he found little enthusiasm for research into timber construction there. In the opinion of many of his colleagues, you get your wood at the DIY store so what's there to research? Van de Kuilen felt stuck at that point. But then TU Munich offered him a chair in 'wood mechanics & construction’ and he left for Germany.
Van de Kuilen says that since then, wood construction technology has taken off, but mainly outside the Netherlands. Among the developments are solid board material (cross-laminated timber or CLT) and composite columns (glulam). These materials make it possible to construct a building as if from a kit. Increasingly larger spans of wood ­– now about 15 metres – are being used so larger spaces are being built with timber. As a leading example, Van de Kuilen cites the Brock Commons Tallwood House student flat in Vancouver, Canada. “TU Delft could have chosen wood construction instead of the concrete tower on the Van der Waalsweg.” 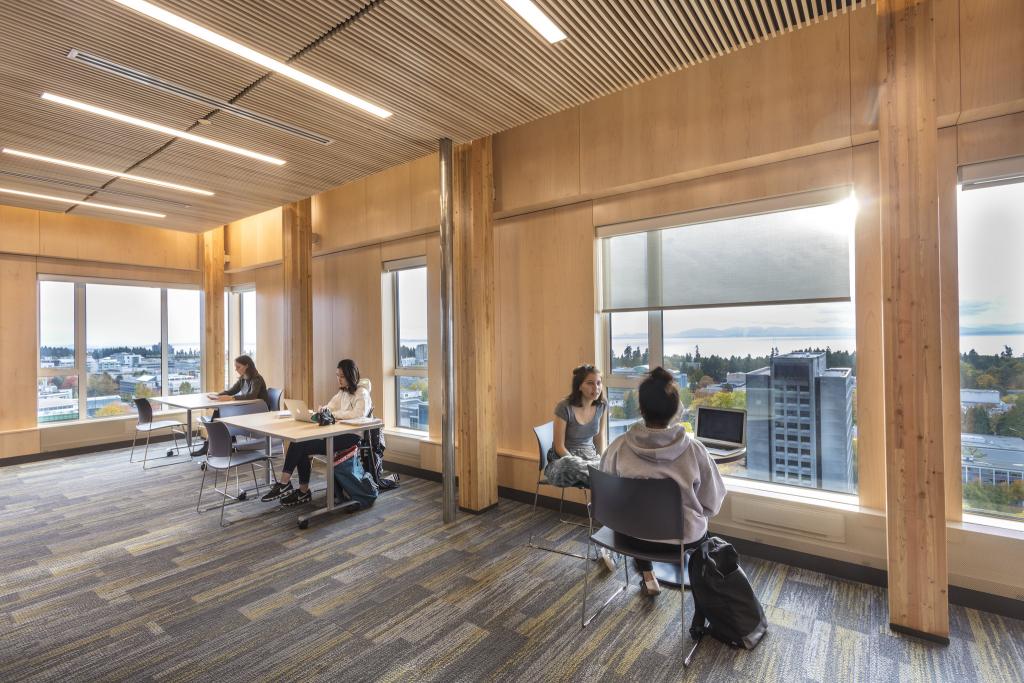 But in the Netherlands too, eye-catching wooden buildings have been or will be built. One is the award-winning eco-school by TU Delft alumnus Daan Bruggink in Almere. Another is the redevelopment of four social housing blocks in Ridderkerk in wood by HA-HA Design. The latter is a project by TU Delft alumnus and part-time lecturer Nima Morkoç - known for his reconstruction of the Juliana Church in Heijplaat, Rotterdam. 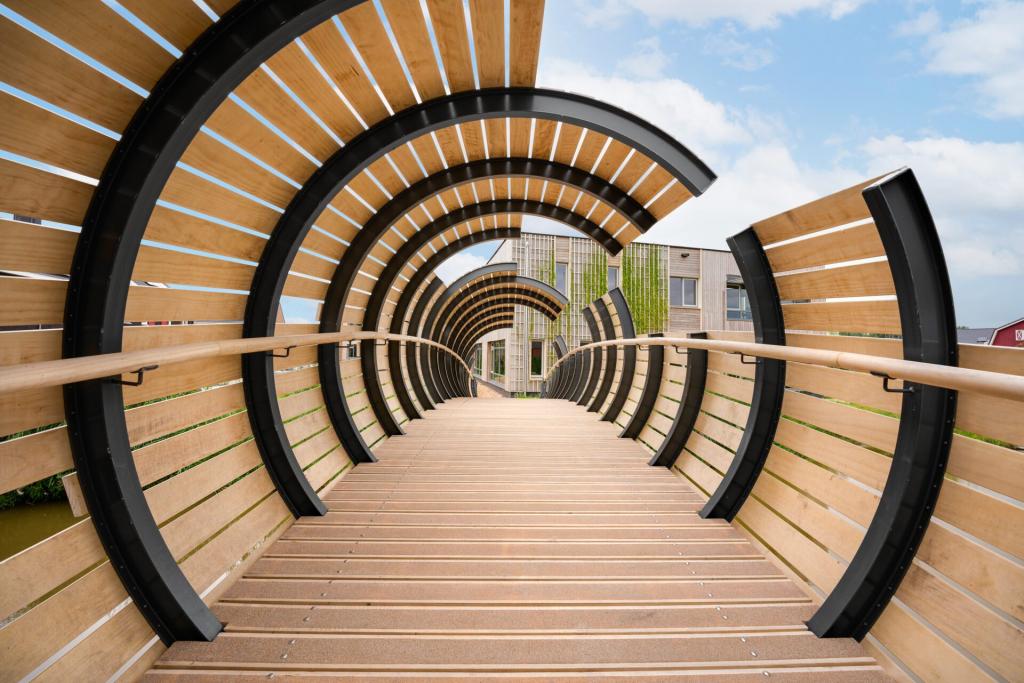 And then there are the climate benefits of wood. In ‘Houtbouwmythes ontkracht’ (in Dutch) by TU Delft and the Amsterdam Institute for Advanced Metropolitan Solutions (AMS), we read that the construction sector, including raw material extraction and transport, accounts for 40% of human CO2 emissions and 39% of global raw material consumption. The production of steel and concrete releases a lot of CO2. But when wood is used, CO2 is actually extracted from the atmosphere, so wood has negative emissions of -755 kg CO2/m3. After transport and processing, approximately -600 kg CO2/m3 remains. As long as wood is reused and not burned, the CO2 storage remains.

There is no shortage of wood, states the publication. At least in Europe. About 38% of Europe is covered in forest which produces one billion cubic metres of wood per year, of which 600 million cubic metres is harvested. The expected increase in demand for wood from the Netherlands if 80,000 houses a year are built in wood, is 2.3 million cubic metres (assuming a modest 30 m3 of wood per house). “This extra capacity is abundantly available in European forests,” concludes Van der Lugt.

“Wood is also much lighter than steel and concrete,” says ‘biophilic’ (in Dutch) architect Daan Bruggink (ORGA architect, in Dutch). As a result, less heavy transport is needed and, in the workshop, electric rather than diesel-powered equipment can be used. “Last year, I could continue building in the middle of the nitrogen crisis,” says the 2013 alumnus of the year, “and in the middle of a nature reserve, no less.”

In an interview with the Dutch magazine ‘Technisch Weekblad’, Bruggink explains how building with natural materials offers prospects for agriculture in the nitrogen crisis by putting an end to ‘depletion of finite raw materials and loss of biodiversity’. Transition Professor Jan Rotmans (Erasmus University Rotterdam), in an opinion piece in the Dutch newspaper ‘Trouw’, also pointed to the possibility of cultivating building materials such as reed, bulrush, flax and hemp as a way out of the nitrogen crisis that the livestock sector in particular is facing. 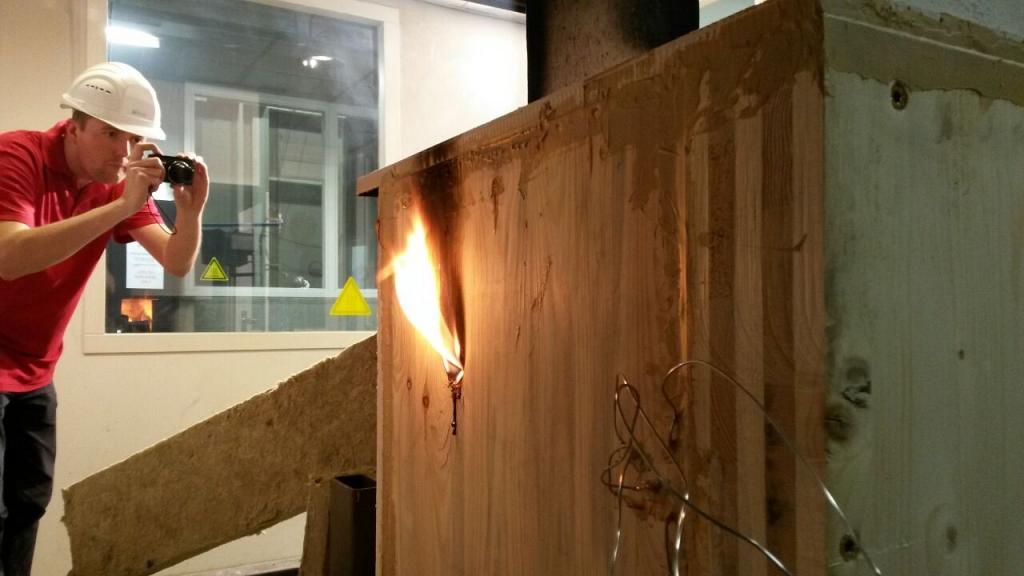 Fire risk, maintenance heavy, and noisy - these are just some of the prevailing prejudices against timber construction that Pablo van der Lugt regularly encounters. In his Dutch publication Houtbouwmythes ontkracht (wood building myths debunked) he explains why timber construction is not technically inferior, why it does not damage forests, why there is enough timber available, and why it is not too expensive.

The fire resistance of composite wood (CLT) was demonstrated in an experiment in 2015 in a graduate study supervised by Van der Kuilen. Further, even the objection of people who don't want their house to look like a sauna is met by contractors who finish wooden panels that look like white plastered walls. 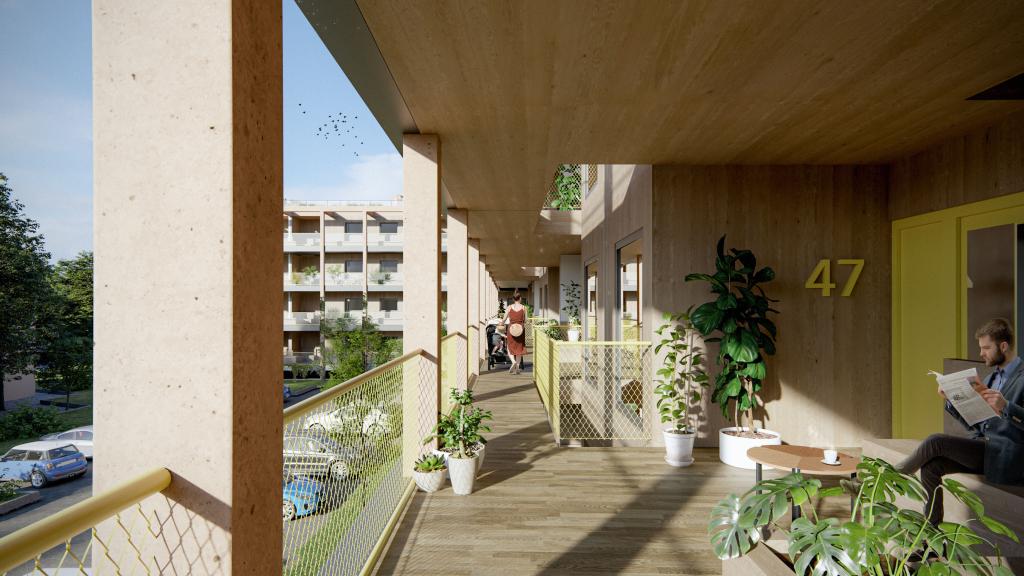 Large construction companies are now overcoming these concerns. At the end of last year, BAM constructors (in Dutch) announced that it would be setting up a large factory in the province of North Holland to produce approximately 1,000 wooden houses per year from 2025 onwards. The prefab homes are intended for the Amsterdam region, where it has been agreed that by 2025 one fifth of new homes will be made of wood.

A month later, a communication followed from the Heijmans (also in Dutch) construction company which announced that it was entering the wood frame construction market with immediate effect by taking over the IIBO wood construction company in Heerenveen. Production is slowly being increased to 800-1,000 homes per year for projects in Norg, Zeewolde and Amersfoort. 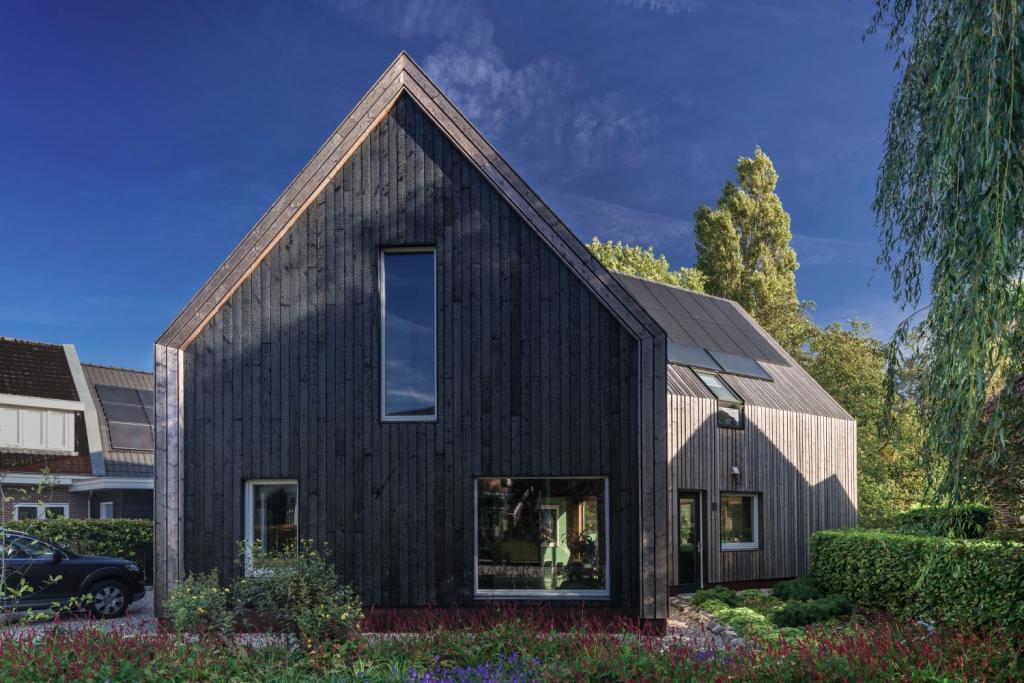 The house with blackened wood and Corten steel bends with the plot at the Kadoelenweg Amsterdam. Design: ORGA architect. (Photo: John Lewis Marshall)

Delft University of Technology is also responding to the growing interest in timber construction, albeit still somewhat cautiously. The Faculty of Architecture and Built Environment (ABE) has created a part-time professorship for two days a week for someone ‘who wants to contribute to the quality of future buildings and to making the built environment CO2 free’. The ad mentions processed natural materials such as CLT, glulam and fibres and the possibilities they offer for meeting the high demand for low emission housing.

Students are already fully aware of the potential of wood construction, observes Nima Morkoç. He supervises second year bachelor students following a timber design studio at the ABE Faculty. The students can choose from various design studios, but timber construction is the first to fill up. “Students feel the urgency,” Morkoç believes. “In my generation, the emphasis was more on transformation, conservation and sustainability in a general sense, now students are more aware of the importance of building with natural materials that do not burden the climate.”

Van de Kuilen views the development at TU Delft from a distance and with a smile. "That research takes us back a century in time," he says. Back then, too, scientific research (in Dutch) was carried out into the technical properties of natural materials such as wood. in his PhD thesis, PhD candidate J.P. Pfeiffer suggested that Delft University of Technology would do well to include agriculture and forestry in the curriculum. This was not to be. However, the botanical garden for technical crops has been preserved to this day. 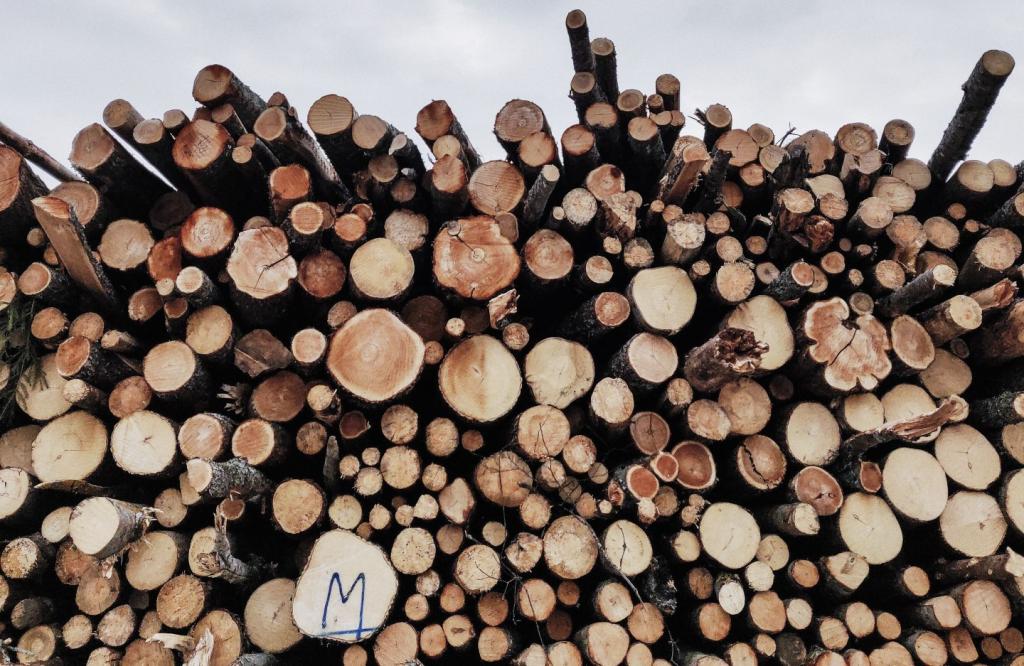