The idea of a submerged tunnel has been futuristic for 140 years but has never been built. Dutch engineers and Chinese constructors may be the first.

A floating tunnel connecting traffic between an island and the mainland is an option if deep water makes the construction of a bridge difficult. The concept of a submerged floating tunnel (SFT) was first proposed in 1886(!), and then 20 more times, but was never built. Since 2018, researchers from TU Delft have been involved in a consortium that is preparing a submerged tunnel between the island of Hainan and the Chinese mainland. The strait between them is 120 metres deep, 30 kilometres wide and often the stage for typhoons.

On 2 March, Pengxu Zou received his doctorate as the first of three researchers at the Faculty of Civil Engineering and Geosciences on an exploratory study of the floating tunnel. He investigated the forces that sea currents and waves exert on it, and the kind of movements they cause. Two other PhD students, Gina Torres and Marcel ’t Hart, are doing research with Professor Bas Jonkman (Integral Hydraulic Engineering, CEG) into the safety and probability of accidents (probabilistics) of a floating shore connection.

In his thesis, Dr Zou calculated that the optimum tunnel cross-section would look like an oblate pointed ellipse as that shape suffers least from lateral flow. Ties (steel cables) between the tunnel and anchors on the seabed stabilise the tunnel. Ties at a large angle to the vertical mainly stabilise horizontally against the cross current. Shorter, more vertical cables stabilise vertically against high waves resulting from typhoons or other phenomena. Both are needed. However, Zou warns against connecting the moving tunnel sections, no matter how slight the movement, and the immovable mainland because of potential fatigue or buckling of the material.

According to his supervisor, Professor of Experimental Hydraulic Engineering Dr Wim Uijttewaal, the connection between the tunnel and the mainland is not an insurmountable obstacle. It just means that the construction needs to be sufficiently heavy to counteract these movements.

So will the Hainan tunnel really be built? “The Chinese are more daring, certainly if prestige plays a part,” says Uijttewaal. But first, he explains, large test rigs will have to be built to test various constructions. The design and budget can then be made depending on the outcomes. After all, in addition to technical feasibility, there is also the economic feasibility to be considered.

For the time being, the floating riverbank connection remains science fiction, but it is one that is being seriously studied. 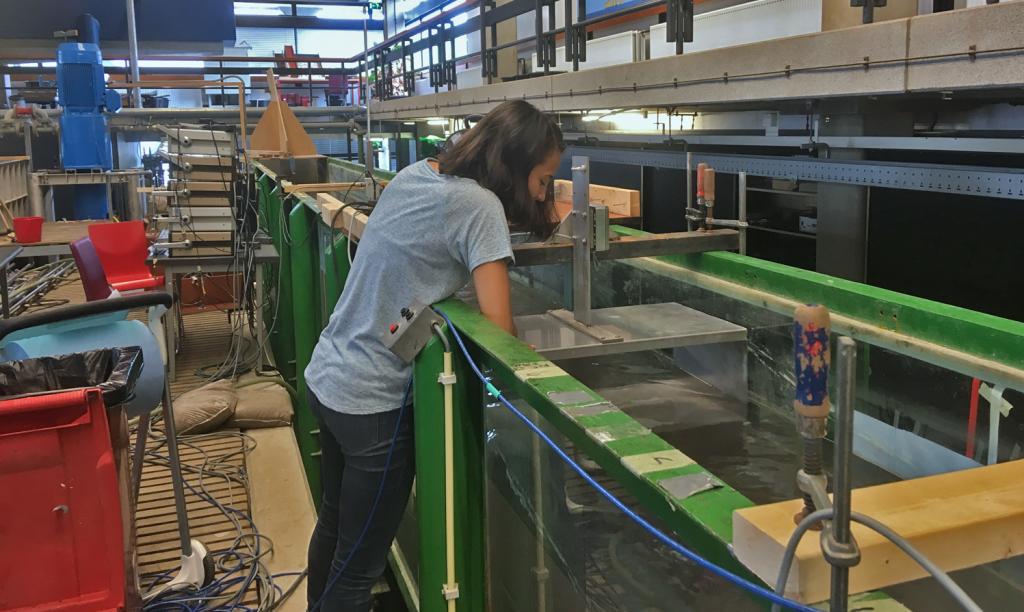 Masterstudent Lisanne Drost measures the forces on a 1:50-model of a submerged tunnel in the CEGS Water Lab. (Foto: collection Wim Uijttewaal)

They have odd electromagnetic properties, or can be ultra-light and strong. Metamaterials are the crème de la crème for material experts, and perhaps for chocolatiers too.