Under the name StudentDoet!, TU Delft students did voluntary work for the city on Tuesday. They cleaned up rubbish, gave a benefit concert, and did a lot of other things.

Doing something for the city in which you study was the reason behind Student Volunteering Delft (SVD) and the Student Council Oras organising StudentDoet!. “It is a thank you to Delft,” says SVD Chair Niels Verheugd, who hopes that this first volunteer day will mark the start of a new tradition. Dozens of student associations worked for various good causes on Tuesday 31 May. Delta was there too.

Sports day
At the X sports and culture centre, six student sports associations jointly ran a sports day for pupils of groups 5 to 8 (aged eight to 12) at the Cornelis Musiusschool. 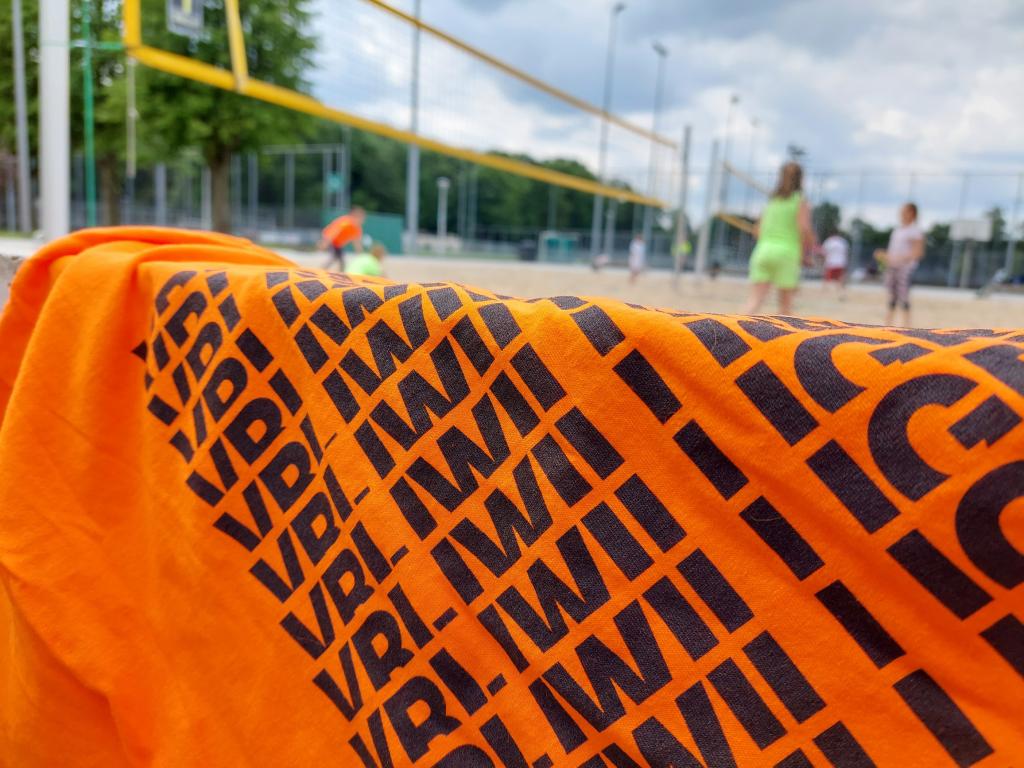 “Miss, miss! It’s my birthday on Thursday!” a boy calls out boisterously. “That’s the best thing about today,” says Lizelotte, “we are all teachers for a couple of hours.”

Despite the pupils already having a morning of sports, they do not stop. Even in the break they run around the fields shouting and still want to play another volleyball match.

A couple of volunteers watch in disbelief. “I’m exhausted,” sighs a student while she traipses towards the exit. “I really respect teachers,” says another. They decide to first take a nap before going back to lectures.

Delftse Hout
At BuytenDelft, the urban farm in the Delftse Hout woods, members of the Leeghwater (Mechanical Engineering) study association are taking a break. The Chair, Mees, is working there with the board members, their successors, and other members to build a tree branch fence and to move sand from one end of the premises to the other end. “It’s so nice working with everyone and seeing the progress you make,” he says.

One student with a bandage wrapped around his hand is pushing a wheelbarrow full of sand. “It’s just a splinter, nothing serious,” he assures us. 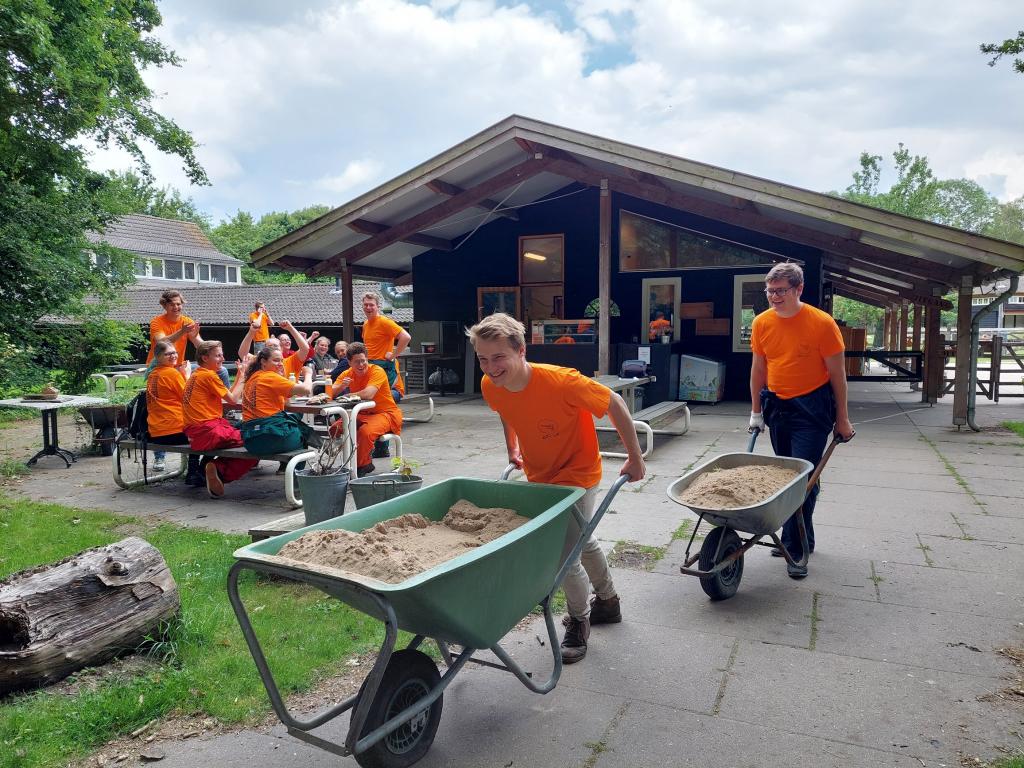 Further on in the Delftse Hout, members of the S.V.N.B. Hooke (Nano Biology), S.V. Life (Life Sciences & Technology), and VvTP (Applied Physics) study associations are cleaning up litter. In less than one hour they have filled half a bag. “We started in the middle on the beach path and are now going wherever the rubbish is,” says Lianne of S.V.N.B. Hooke.

Their trail goes among trees and stinging nettles to a picnic table where dozens of bottle tops on the ground have been trampled into the muddy ground. Two keen volunteers are flipping the bottle tops out of the ground one by one.

Lianne hopes that their activity will be continued. “It would be great if more students join next year.” 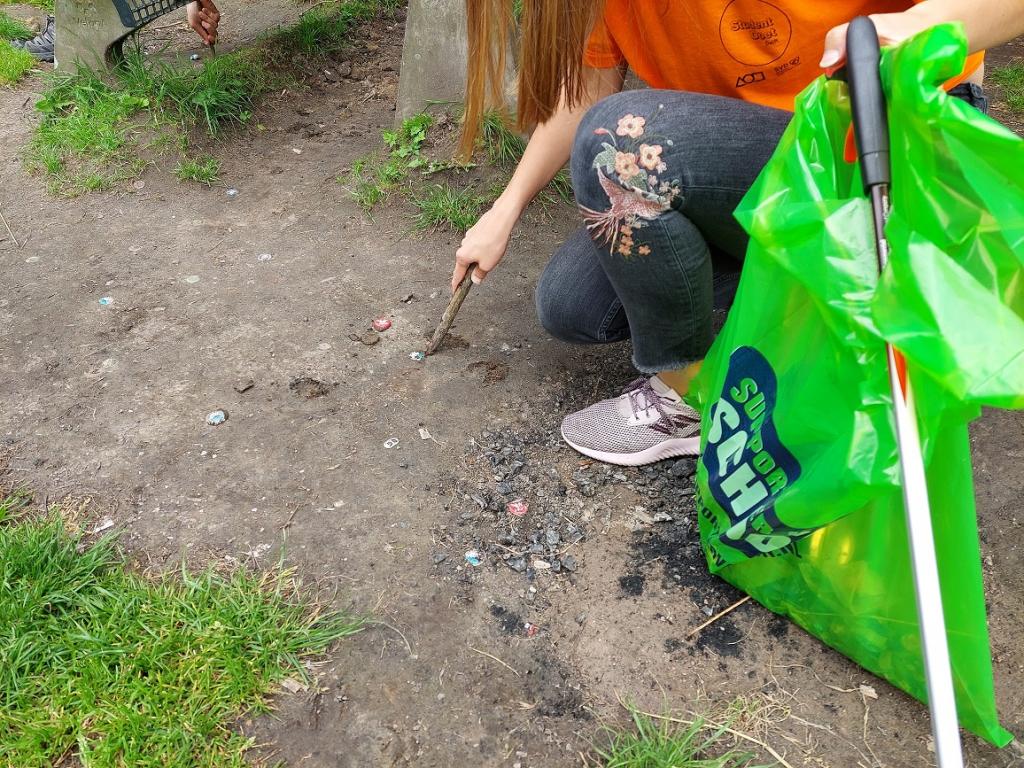 Wall painting
On the other side of Delft, in the Buitenhof neighbourhood, something colourful is going on. The Sylos (Architecture and the Built Environment) study association is working with the employees of SHS Delft and the Cultuurlab (in Dutch) cultural platform on a wall painting at Abtswoude Bloeit, the former care home where students, senior citizens and Ukrainian refugees now live. The design for the painting was made by Stylos member and resident Stijn and was chosen by the residents. 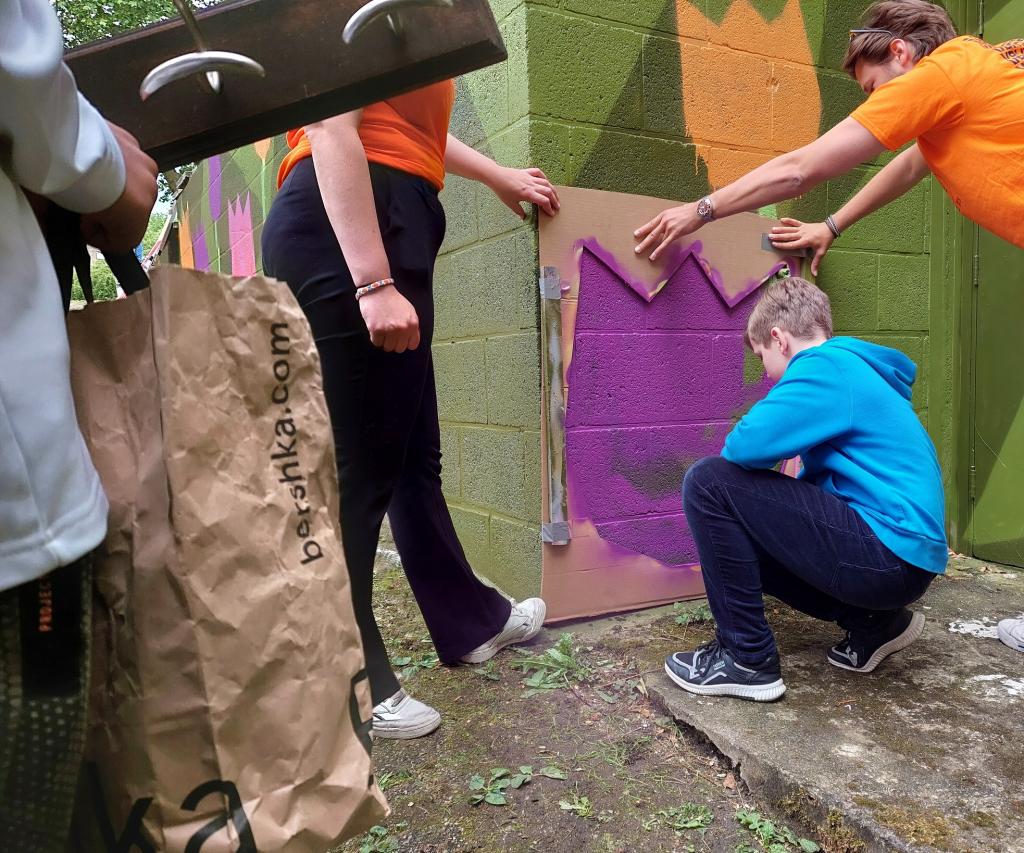 During StudentDoet!, the residents, volunteers and Ukrainian children work with Micha de Bie, the artist, to give the finishing touch to the wall painting. 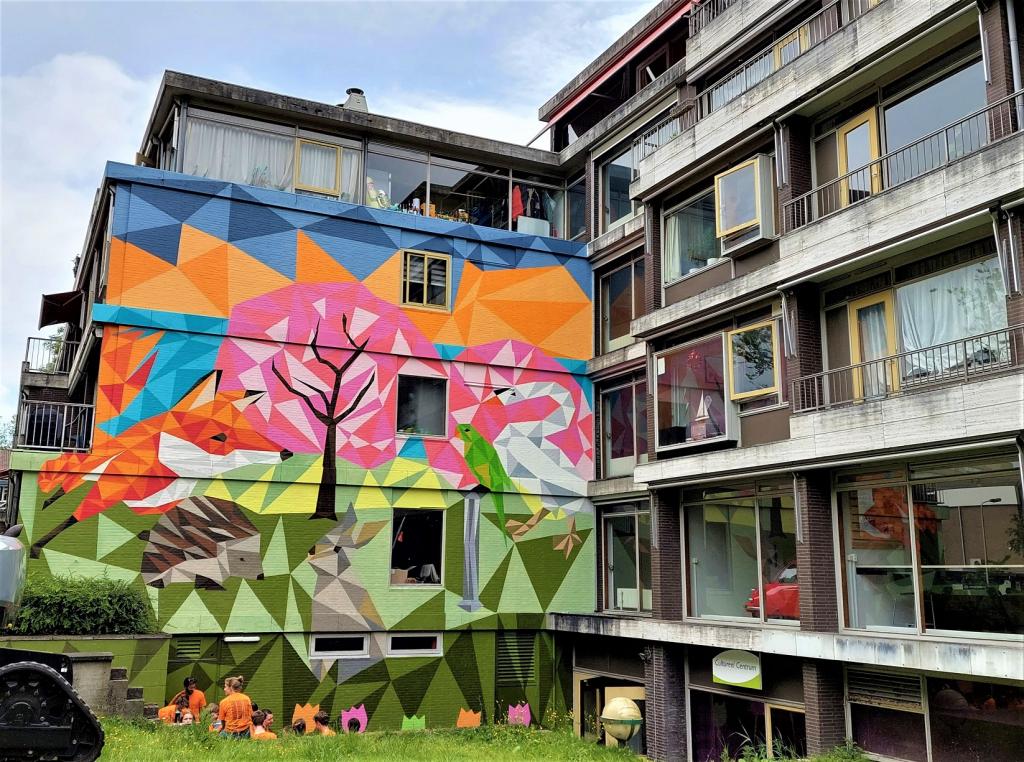 Benefit concertPerformances by various TU Delft student bands such as Funky Monkeys and Phoenix Funk Foundation on the Markt bring the day to a close at 22:00. Entry to the festival grounds is a donation to the Food Bank. 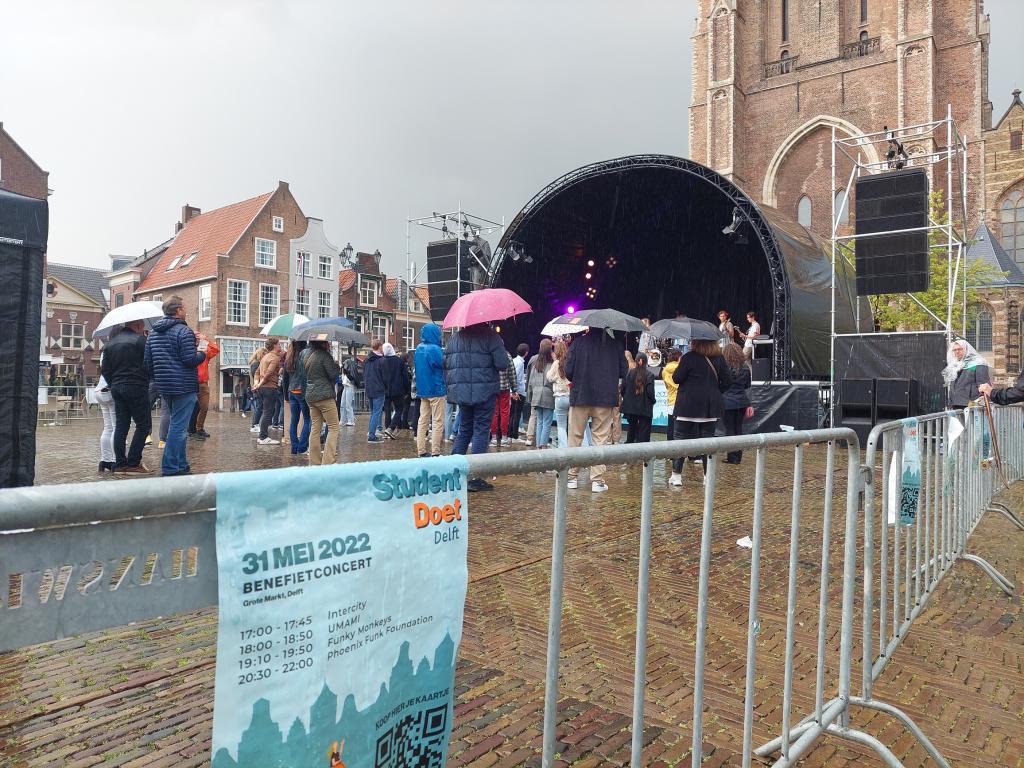 The rain that sometimes pours down from above does not dampen the party atmosphere. Under umbrellas and wrapped in ponchos, people dance – drinks in hand – no less enthusiastically.

When Oras Chair Maarten de Nooijer announces that nearly EUR 2,000 has been collected for the Food Bank, the crowd breaks into a cheer. Peter Vogelaar, Chair of the Food Bank, receives the news gratefully. “This money means that we can do something extra for the thousands of people in Delft and their children who depend on the Food Bank for their food every week.” 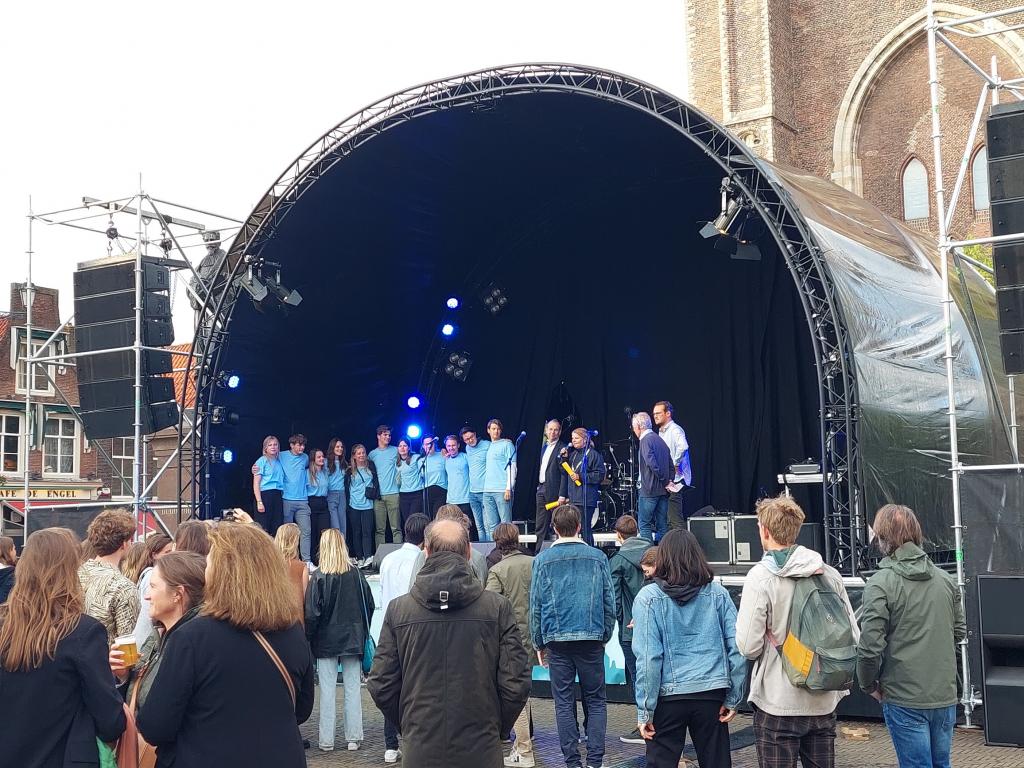 Between the acts, Vice-Rector Magnificus Rob Mudde and Mayor Marja van Bijsterveldt express their thanks and admiration for the organisation. “Students bring a lot of life to the city. Sometimes for the better, and sometimes less so,” says Mudde. “But today we celebrate voluntary work. This is not only good for the city, but also for the development of these young people.”