The most hidden of all four gardens: The Red Listed behind the Applied Sciences building. (Photos: Marjolein van der Veldt)

Fifteen students designed four gardens to showcase the relationship between people and nature in a world subject to climate change. All this on the TU Delft campus.

The students, with backgrounds in landscape architecture, urban design, and architecture, participated an elective course of the master track Landscape Architecture to design a botanical garden for the TU Delft campus. The group wanted to create a set of gardens that would show the relationship between people and nature, and what this means in a world subject to climate change. For this, they collaborated with TU Delft's head of maintenance, Rene Hoonhout.

Called ‘The Botanical Garden of the Anthropocene’, the four gardens marked as landscape interventions are spread around the TU Delft campus. “Anthropocene is the era of human influence. The gardens show the relationship between human and non-human ecologies,” says team member Margot Hols. “This year, the course focused on urban microclimates. The gardens showcase the multitude of microclimates that make up the campus environment, most of which are shaped by human intervention.”

The Red Listed
The back of the Faculty of Applied Sciences hosts a unique, moist and shady climate. The Red Listed garden celebrates this specific microclimate through a carefully designed planting scheme. All kinds of shade loving plants, like ferns and foxgloves, will bloom throughout the seasons. Why is it called The Red Listed? Because this garden showcases endangered Dutch plant species which are struggling to survive in modern times. Think of species like cenelophium denutatum (Baltic parsley), hieracium pilosella ‘Niveum’ (mouseear hawkweed) and leucojum aestivum (gravetye giant). 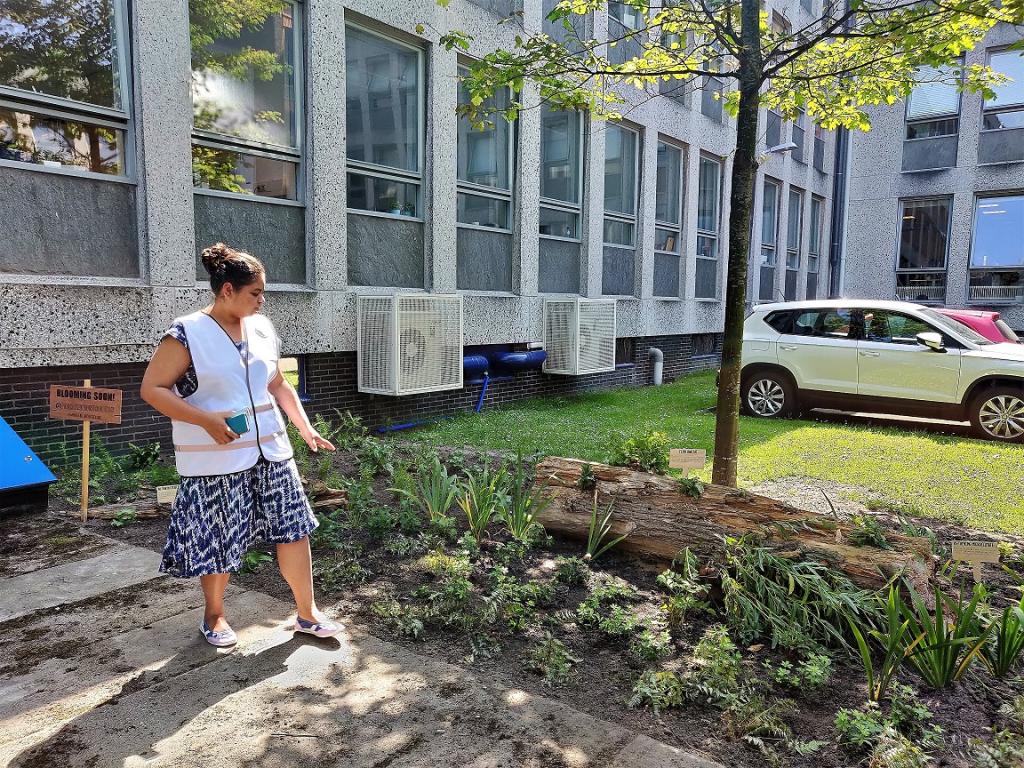 One of the students shows the different variety of plants of The Red Listed.

The Water Trace
Anyone going to the back of the library or driving past the Schoemakerstraat may have noticed the shape of the roof. The microclimate behind the Library is strongly influenced by this slanted roof which casts a shadow for most of the day and guides rainwater runoff through its twelve round voids. The small garden will reflect the relationship between the building's architecture and the microclimatic conditions by creating twelve circular gardens aligned with the roof gutters. At present there is only one garden, but the TU Delft groundsman promises that this will change soon. “The rocks covering the grounds need to be washed. As soon as we do that we will create the other eleven gardens.” 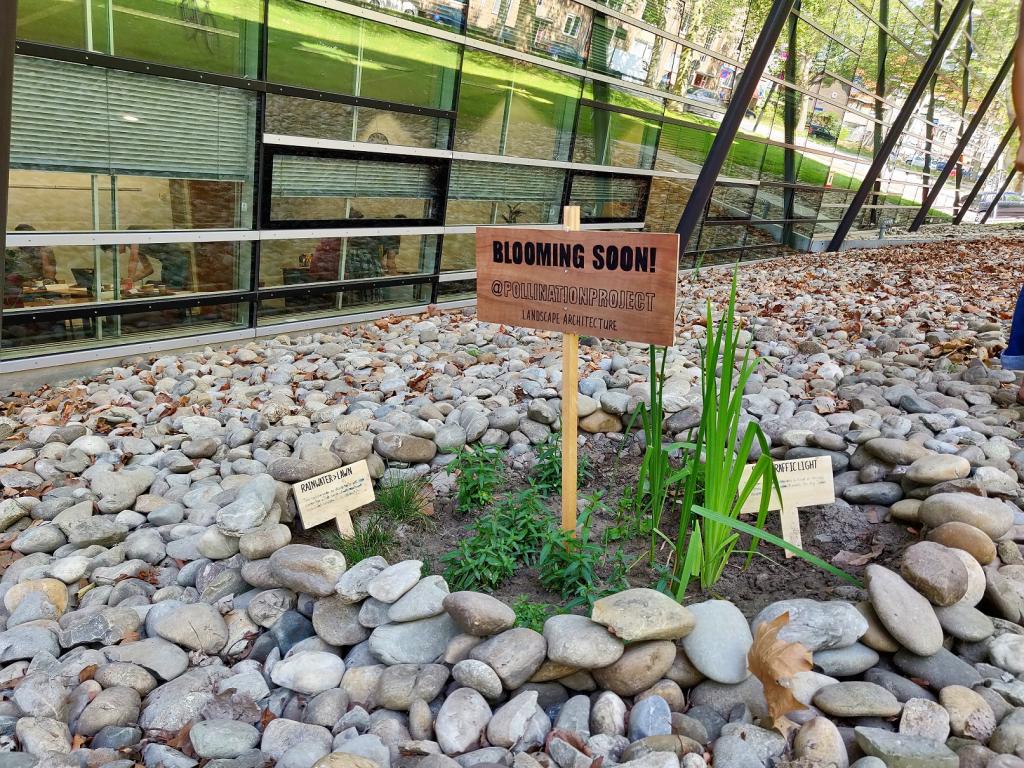 The first of twelve circular gardens at the back of the Library.

The Trickling Trail
The artificial water basin in front of the Faculty of Industrial Design Engineering is home to many fish, but the rapidly deteriorating water conditions are reducing their life expectancy. Floating islands covered with plants will purify the water naturally so the living conditions of all flora and fauna will be improved. The bank gradually slopes, in levels, towards the water. This gradient affects the soil moisture of each level, creating different micro habitats which are showcased in the design.

The floating islands will purify the water in front of the Industrial Design Engineering building.

The Whispering Winds
Who hasn’t experienced the gusty winds around the EEMCS building? The building’s perpendicular placement in relation to the prevailing wind creates a wind tunnel. People generally view this as negative. This project aims to turn this negative perspective into a positive one by showing the wind blowing. Part of the surrounding lawn will not be mowed for over a year, making the growing grasses home to insects and animals that depend on taller vegetation. 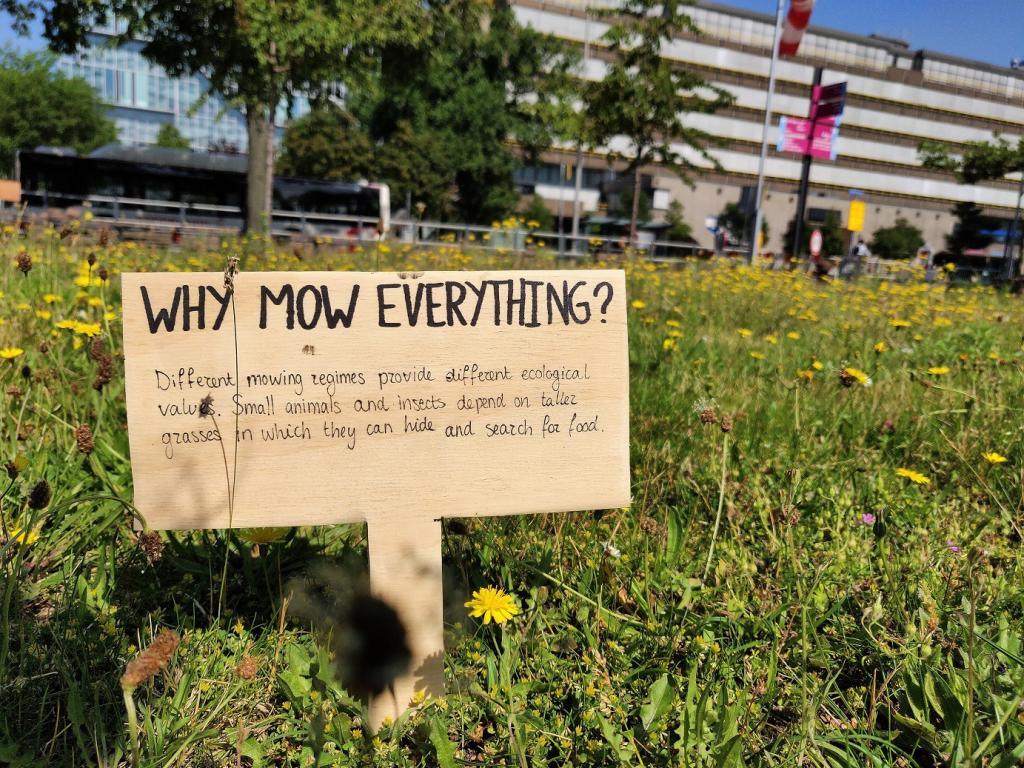 Who knows what will grow in twelve months time?

‘They help people become more aware of the nature around them’

During the opening ceremony on 26 June, Delft Botanical Garden Director, Bob Ursem, stressed the importance of projects like the Botanical Garden of the Anthropocene. “We host several flora and fauna species in our garden that are threatened or extinct in the wild. But only the people who visit us see them. Projects like these are low key and accessible. They help people become more aware of the nature around them.”

Team member Alexander Stal agrees. “I’m happy TU Delft made four spots available to us. We had some other ideas, but they didn’t make the cut. For example, we wanted to build something at the Mekelpark, but the grounds were off limits.” The same goes for the building site near the Bastiaansplein in the city centre. “We’d love to see what happens if you don’t cut or mow the grass at a building site for a few years. Who knows what will bloom. Maybe that’s an interesting idea for next year’s team. That’s why, the coming years, the project will go on with new groups of students. In this way, we hope to enrich biodiversity on campus, year after year.” 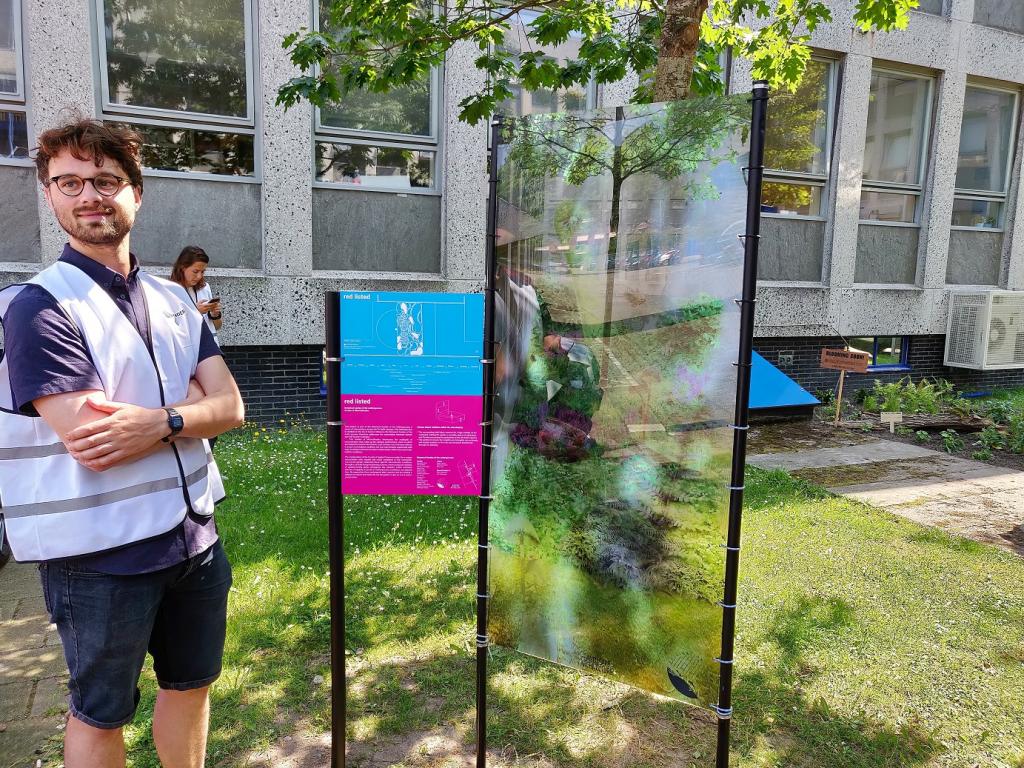 Alexander Stal in front of The Red Listed garden.

Computer science student Harshitaa Pandey was surprised by the positive feedback that resulted from the personal story she shared with Delta. She has now started a survey.
Education