Students fight disinformation with a game

Rafael Jezior (in the back( is Mr. Black and Dennis de Beeld (in front) is Mr. White. (Photo: Sam Rentmeester)

Two TU Delft students are well underway with their ImmunoWars card game. While they thought up the game before the Covid crisis, the pandemic strengthened their mission.

The intention behind ImmunoWars is to teach people how the immune system works, what infectious diseases there are, and what you can do about these diseases. The makers are Life Science & Technology master students Rafael Jezior (29) and Dennis de Beeld (24), alias Mr Black and Mr White. These two mysterious figures play a vital role in ImmunoWars. Delta talked to them.

How did you get this idea?

“In October 2019, Dennis and I talked about how much fun it would be to play a game in our own subject area,” says Rafael. “Then we found out that there only a few games that covered the immune system and the existing pathogens.” Dennis continues. “We thought this odd. There are all sorts of games with monsters, orcs, dragons, aliens and so on, so why was there nothing as close to us as our own cells, immune system, and real ‘monsters’ such as pathogens?” Rafael adds that “There is such a wide range of pathogens – parasites that penetrate your cells, fungi, viruses, and bacteria. How they attack your cells and how your immune system defends itself – with or without external aids such as medicines and vaccinations – can be compared to a police officer chasing a crook. One of the soldiers of your immune system, the macrophage for example, hunts down cancer cells, just like an American TV car chase. If you look through a microscope, it looks like you are hanging above a speeding highway chase in a helicopter.”

Lots of wild plans die quickly. Why did you think that you would go ahead with this?

Rafael explains that “We heard from acquaintances, friends, and neighbours that they did not know much about the immune system. Most people have an idea about what a virus or vaccination is, but that’s it.” Dennis says that “Science is fantastic, but it does not always present itself well. Scientific knowledge is often expressed in complicated sentences and complex graphics in articles. So we felt that this was something that we could do. We use a lot of storytelling techniques, appealing images, a lot of humour and scientifically reliable information in our game.”

“Yes,” says Dennis. “Did you know that our game has a card about a mysterious virus? We thought this up at the start of the game, in about October 2019, so even before the world experienced Covid-19. Since the Covid crisis, the bond between science and the public worsened faster than we expected. Distrust became rampant. People did not understand what was going on and this led to fear, distrust and resistance. Covid-19 made us put even more emphasis on science, to get rid of that ignorance, roots and all.” Rafael explains that “From the time that it went downhill with the world, we were moving up. It became our mission to fight against disinformation in a playful way and keep people abreast of the latest developments.” 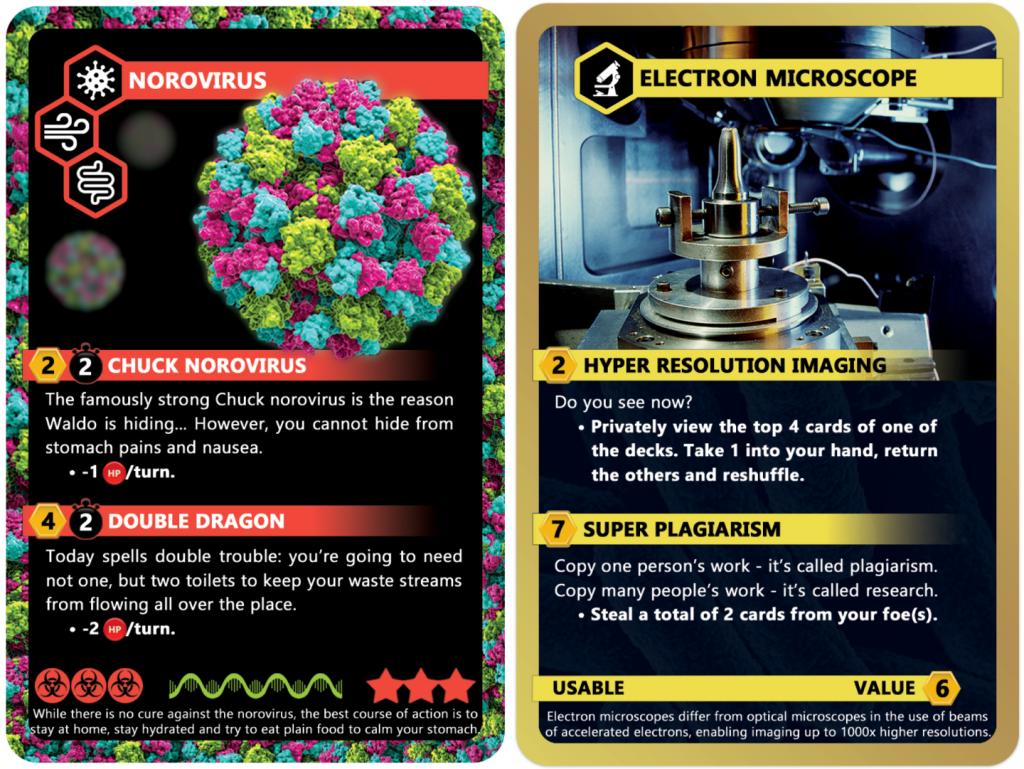 Does the game achieve that goal?

“Previously, when we talked about cells or bacteria with our friends, it went in one ear and out the other,” says Rafael. “But after just one game of ImmunoWars they knew what cells do and how you can tackle certain illnesses. The game has a lot of satire and dark humour. I believe that that helps remember information.”

How does your game work?

“Mr Black and Mr White – who are the main storyline of the game – embody the fight against infectious disease and bioweapons on one side, versus science on the other side,” explains Rafael. “The players attack each other using playing cards with viruses and bacteria such as rabies and salmonella. The opposition defends itself with cards with protective means such as technology, medication, vaccinations, and action cards such as social distancing, quarantine or personal medication from a 3D printer. There are 108 cards so there are countless strategies and combinations.”

How do you decide what scientific knowledge to include or not include in ImmunoWars?

“We get knowledge from scientific or popular scientific magazines and we took a lot of notes during lectures that we can use in our game,” says Dennis. Rafael continues. “We take note of what lies behind scientific research. It used to be said that breakfast was the most important meal of the day, while in reality a Kellogg’s marketing campaign lay behind this.” Dennis: “The scientific research that we use is published on our website. So people can delve further into the subjects on the playing cards and we are as transparent as possible.”

Are you able to make a living from the game?

“Not yet,” answers Dennis. “We both have part-time jobs. It is hard work, but we are slowly getting more recognition.” Rafael says that “We hear more and more often that gamers and scientific institutions are interested in our game. It would be great if an institute would order our game as a business gift or as part of a Christmas hamper.”

You are both studying, working part-time and are devoting a lot of time to ImmunoWars. Apart from that, Dennis, you became a father this year. Do you get any sleep?

“You don’t want to see my diary,” answers Dennis, “it’s always busy and we have to sacrifice some things. In our case it is sleep. But it gives us so much energy.” Rafael says that “Some things are good to combine. For example, for our master’s we took the subjects of Leading and Managing People and Management Science and Leading & Managing People, which gave us a lot of knowledge that we could use straightaway.”

What will we hear from you in the future?

“We have plenty of ideas,” says Rafael. “For example, we issued an STD version for students. We are always coming up with new cards and themes, so that we can extend the game. If it were up to me, we would work on this for the rest of our lives.” Dennis agrees. “Yes, the same. One whole shelf in my bookshelf is reserved for ImmunoWars. It would be amazing if future additions would fill up the whole bookshelf.”