Student Dana is giving shelter to her displaced mother-in-law

Dana: “If there is peace, then I will return. I will use the knowledge that I have acquired here to help rebuild the Ukrainian aerospace industry. (Photo: Justyna Botor)

The Ukrainian TU Delft student Dana (24) is providing shelter for her mother-in-law in her studio in Delft. “It took us three weeks to convince her to flee abroad.”

Dana, an Aerospace Engineering student, is sitting cross-legged on the sofa in her studio in the centre of Delft. Her hands are folded in her lap. Behind her, her husband, 29 year old Sascha, is working on his computer, and in the corner at the dining table is her 63 year old mother-in-law. “It can get busy so if I want to study, I go to the TU Delft Library,” says Dana.

The bachelor’s student has now studied in the Netherlands for about four years and when the war broke out in Ukraine, she decided to offer a safe haven to her mother-in-law in Delft. “We are lucky,” she says, “most of our family members are safe.” Her parents, younger brother and sister, and dog were able to flee to Lithuania, where they are now working and going to school. “It is amazing what the Lithuanians have managed to do in a short space of time,” she says. Both her parents are doctors and were granted Lithuanian work permits within two weeks. Her brother and sister – both in their teens – are going to Lithuanian school. Only her uncle and father are still in Ukraine. “They are still safe at the moment.”

Dana takes a moment to think about the question how she is feeling. She takes a deep breath and chooses her words carefully. “I think my overriding emotion is anger. I am angry. Angry that Russia is doing this to my homeland. Angry that so many people are dying. Angry that every morning I wake up to the realisation that nothing will ever be the same again.” Since the war broke out, she finds it hard to concentrate on her studies. “Everything I have done before now – work, studies – feels useless. How can I continue with my life as if everything is normal?” She had planned to finish four subjects this semester, but is now happy if she passes even one. During the first few days of the war especially, she watched the news non-stop. Shortly after the invasion of Ukraine she worked voluntarily at the Ukrainians in the Netherlands Foundation as head of humanitarian help. “We went from five to 300 volunteers in a short space of time and now have about 30 new collection points in the Netherlands. Our drivers bring the collected items to Ukraine. I was really surprised at how you can get such a big logistical organisation off the ground so quickly.” It was not without sacrifices though. She worked non-stop and is still exhausted. “To say it out loud, almost burnout tired. I had to stop because I could hardly do anything at a certain point.”

‘How can I continue with my life as if everything is normal?’

And there were fears for her mother-in-law Lidiia who did not want to leave Ukraine at first. “She was scared to leave her home as there were sirens going off every day and then at one point there were explosions just 100 metres down the street. This kind of fear is all-consuming. The kind of fear that makes you too scared to do anything.” It took three weeks before Dana and Sascha persuaded Lidiia to take a bus to the Polish border. She stayed by herself for one night in a shelter for refugees in Poland and then took the train to the Polish city of Kraków. “She does not speak English, is in poor health and could not use her mobile phone in all that time. We become more and more worried that something would go wrong.” In the end, Dana’s husband Sascha flew to Kraków to collect his mother. He had booked a hotel for her in advance and given her the address. “She found it by showing a lot of people the address.”

Lidiia has diabetes and, through a ruling by the Dutch Government, is getting the medicines she needs. “We are so grateful for this. But for the rest, it’s hard for her. She does not speak English and does not know anyone here. I tried to see if there were workshops, activities or other forms of daily care for Ukrainian refugees in Delft, but unfortunately I could not find anything.”

She also realises that she and her husband are lucky in terms of finances. Dana works part-time as a web developer in The Hague. Her husband Sascha is a tech support staff member for a company in the United Kingdom and works remotely from their studio in Delft. Whatever they can spare they send to Ukraine or to aid organisations that work in Ukraine. That morning she transferred money to an organisation that helps pets from Ukraine that fled with their owners.

Dana is trying not to think too far ahead. “How can we know what will happen in the rest of the year if we don’t even know what will happen tomorrow?” She hopes that the West will continue imposing new sanctions, introduce an oil and gas embargo, and continue supplying weapons. “This is the only way that there will be a small chance that peace will come on our terms.” And if there is peace? “Then I will return. I will use the knowledge that I have acquired here to help rebuild the Ukrainian aerospace industry. 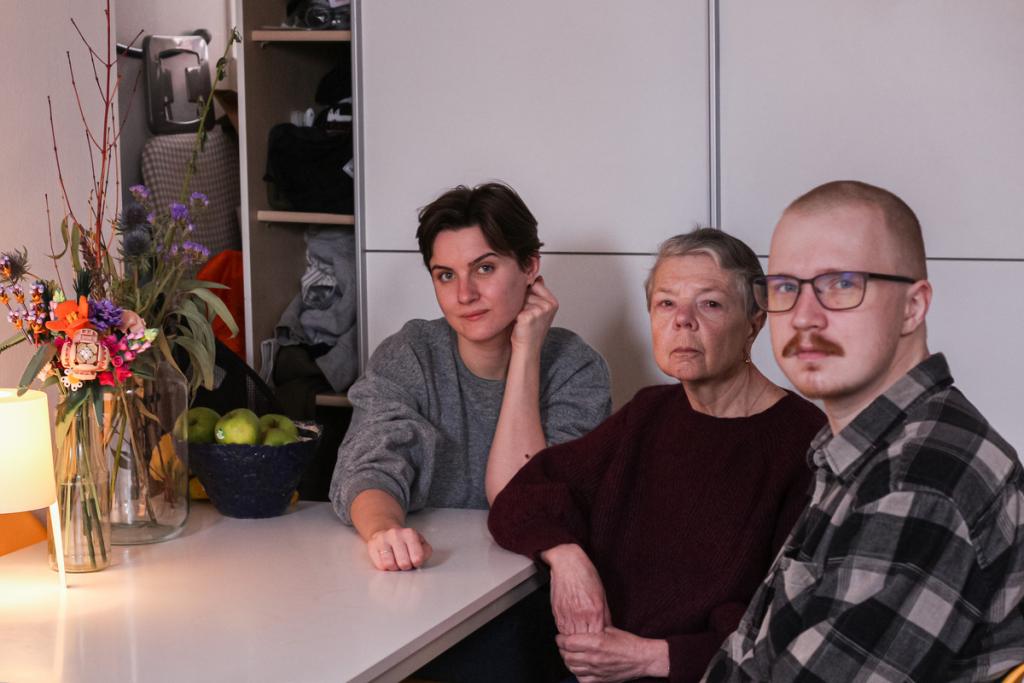 Dana (left) with her mother-in-law Liidia and her husband Sascha. (Photo: Justyna Botor)

TU Delft students Max and Mathijs died in Scheveningen over two years ago. Max’s mother, Marjolein Hartman, wrote the book ‘Rauw’ about the period that followed their deaths.