The student association collector knows every board: ‘But I don’t suck up to them’

Sabine van Holsteijn collects everything to do with student associations. The most striking item in her collection? A string with a fraternity logo.

She now has almost 555 almanacs from student cities as far apart as Groningen and Maastricht. And then there are the ties, badges, posters, t-shirts and so on. Sabine van Holsteijn (26) from Delft has spent 13 years collecting anything connected to students and study associations. She is also known all the ‘student association collector’ and ‘the corpsfan’.

What is the most striking item in her collection? A string with a fraternity logo given to her as a gift by a female student in Wageningen. “It’s great if you are included in these sorts of traditions as an outsider,” she says. “As an outsider, it’s unusual to even be at a student association or fraternity. But because I’m interested in the origins of student associations, people enjoy telling me all about them.”

A new look every time
While she did not study at TU Delft, she is a familiar face on campus. We talked to her at the entrance to the Faculty of Industrial Design. Once in a while she waved at a familiar face strolling by. She was visiting the Study Association for Applied Physics that afternoon. She was wearing a plaid skirt and badges from other student associations had pride of place on the jacket she was wearing over her blouse and tie. “I adjust my look to where I’m going. If I go to Albertus Magnus in Groningen, for example, I always wear their student association beret.” 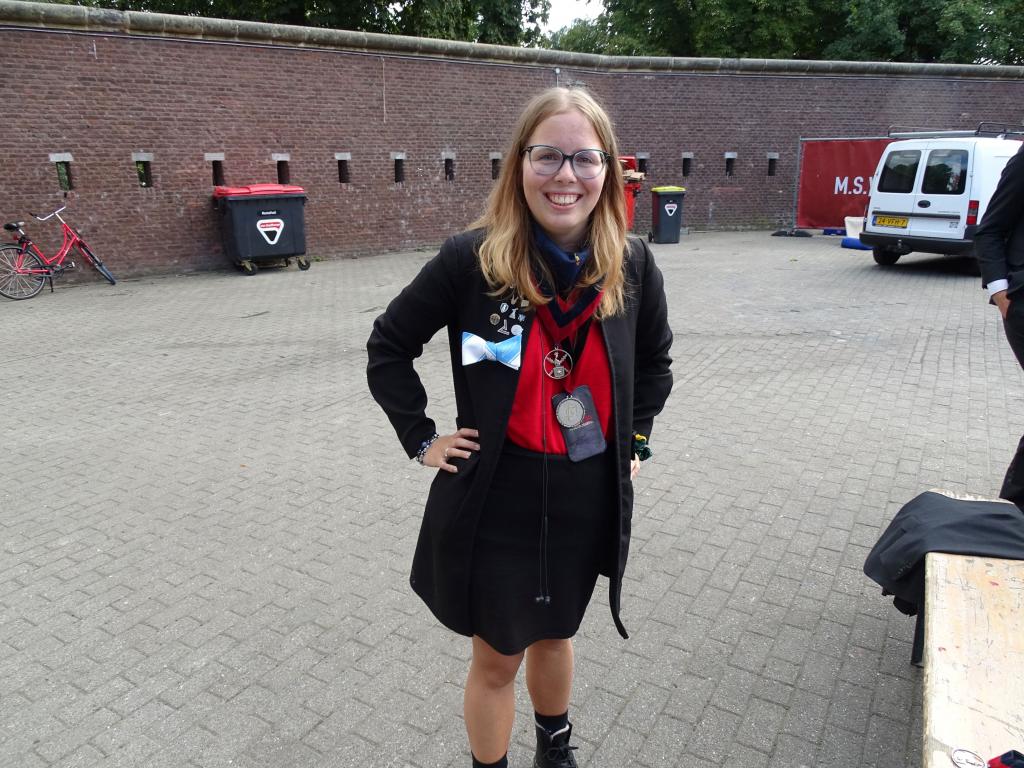 Her hobby started with a Virgiel flag that she spotted hanging in the centre of Delft in 2007. She liked the logo so much that she took a photo of it. A little later she came across an almanac of the student association in a bookshop. She wanted to have a copy. “I set up myself as a student association collector on 8 May 2007. I am celebrating my 13th Dies Natalis,” she jokes. Before the corona crisis made it difficult to meet up, she took the train at least once a week, going to collect things from a study or student association. Then she went home with two full bags. It sometimes drove her father crazy.

Ancient almanacs
Among the almanacs that she added to her collection in the last few years are very old copies. DSC almanacs from the turn of the previous century, for example. And even an almanac of Leiden’s Minerva student association from 1857. It won’t be long before Van Holsteijn will be the historical archive of studying the Netherlands. 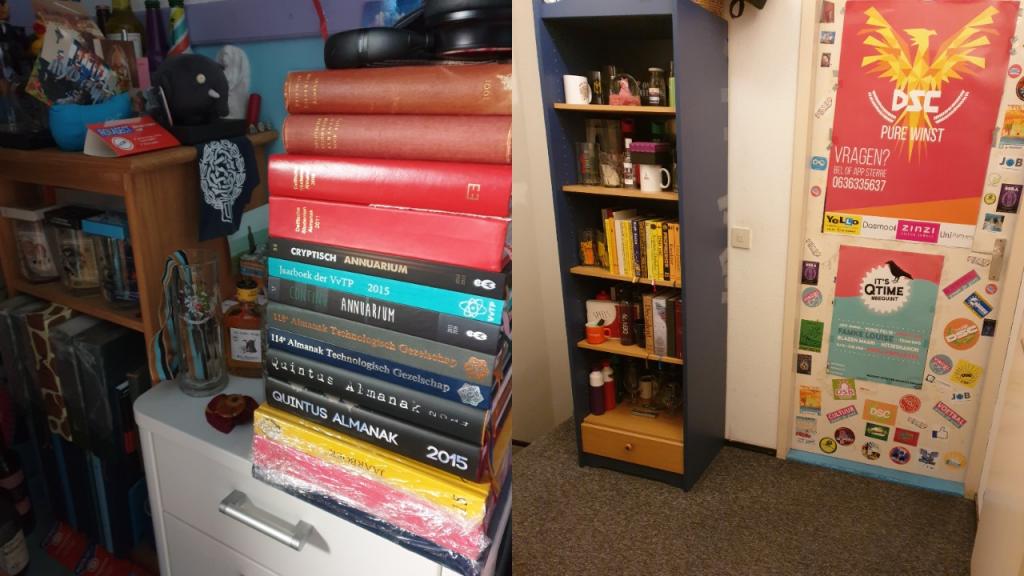 She visits some student associations every year. She emails the new board, explains what she is doing and asks if she can visit. Of course. Usually. So she knows more ex-board members than most members. “But I don’t suck up to them. If you want access to a student association as an outsider, you have to approach the board.”

She records almost all her visits down to the last detail on her website and social media channels. “A couple of years ago I put a photo on Facebook after a reception. That really exploded. There was a guy in the background with his trousers down exposing himself.” She only saw this after the photo had been online for hours. “The gentleman in question was naturally not happy with it so I removed the photo.”

She has learned from all that collecting. And not only about the abbreviations that she carefully weaves through her conversation. “A few years ago I would rather have died than talk to a stranger. And three stops on the tram was far enough. Now I travel around the whole country, from Groningen to Maastricht, and go up to a board member without a care in the world.”

Shelf for her grandchildren
If at all possible, she wants her children and grandchildren to continue her hobby, says Van Holsteijn. “My dream is that there will be a shelf among my collection with things from my grandchildren’s student association times.”

She thinks for a bit and her eyes start to twinkle. “And a Virgiel flag would be good too. Then my collection will really be complete.”

Speechlessness and defeat among the Delft students who spent weeks building the longest beer crate bridge in the world. They saw it collapse last night.
Campus

A Delft city resident has to give up 13 student houses

Thirteen buildings in Delft, whose residents are mostly students, will be repossessed by the state. The owner has to hand them over because he bought them with illicit money.