Sports to make you feel superhuman

In the game Venga! players have to wear a VR set while climbing. (Photo: TU Delft)

Superhuman sports are physical activities where the cognitive and physical functions of the human body are enhanced through technology, ‘smoothing differences between players’ abilities’. All the disciplines rely on technology like VR or AR devices, they involve physical fitness and skills, and are played either for fun, competition or health reasons.

The sports can be invented from scratch, although most of them are adapted versions of existing sports. For example, VRabl is a game based on dodgeball where players hit virtual rabbits with virtual balls, and in Venga! players climb a low wall while the VR set simulates the environment of a high mountain.

Delft hosted the first Superhuman Sports Design Challenge this week where nine student teams, three of them from TU Delft, designed and exhibited superhuman games. The event was sponsored by TU Delft’s Sports Engineering Institute and the Delft Health Initiative in collaboration with the International Superhuman Sports Society.

A panel of international experts from the Superhuman Sports Academy evaluated each discipline according to inclusiveness; innovation; human augmentation (how much human senses and abilities are augmented); the fitness and skills requirements; the level of player engagement; and whether they are fun to watch for the audience. 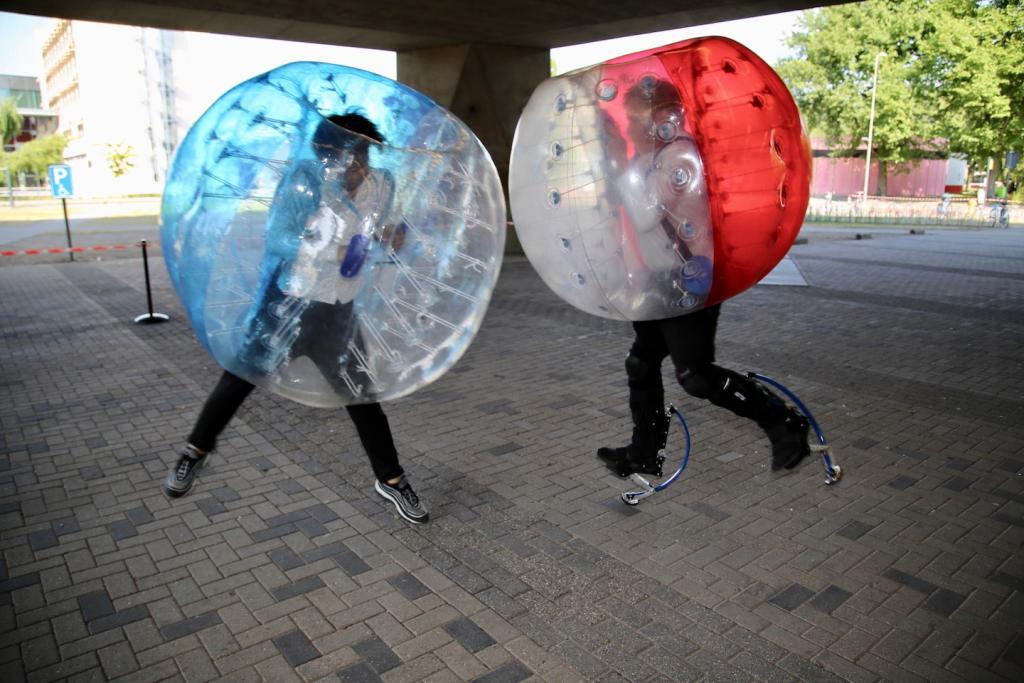 Stephan Lukosch, Associate Professor at TU Delft and Chair of the Organising Committee

What is the goal of superhuman sports? “I think that sports that combine digital games with real physical activity can motivate people to do sports again. Pokémon Go, for example, got a lot of people outdoors and moving. It wasn’t really a sport, but the combination of a digital game and the outside world worked. Superhuman sports can also be used to train athletes and even reduce injuries. You develop new abilities if you have a better understanding of how to do an exercise and how to use your energy more efficiently.”

Why did you decide to organise this challenge?“You can develop technology that makes you superhuman. You feel as though you can look through walls, fly and jump really high. The plan is to hold other challenges in 2019 and 2020 and showcase the most interesting and challenging sports after the Olympics in Tokyo.”

Who is taking part in this challenge?“There are nine teams, mainly of bachelor and master students with a few PhD students. There is a concentration of groups from Japan, but the members of the groups are very international. We also have a group from Germany.”

Do you think superhuman sports will be common in the future?“I am always careful when predicting the future, but I see how much fun people have when they are playing these games. And remember, these are all student projects and are only prototypes. The tricky part is the cost of the technology. Nobody is going to buy a Microsoft Hololens for EUR 2,000 to play a game, but if the technology becomes more accessible, superhuman sports may well take off.”

What other challenges need to be addressed for superhuman games to become more popular?“At the moment, superhuman games are fun for the athletes, but boring for the audience to watch. The audience sees players wearing headsets, looking at something it can’t see, making strange gestures. If superhuman sports are to really take off, ways must be found to involve the audience. For example, spectators could influence the game from the outside with their devices. The players could have special items or power-ups, or it could be made more difficult for the players to achieve their objective.” 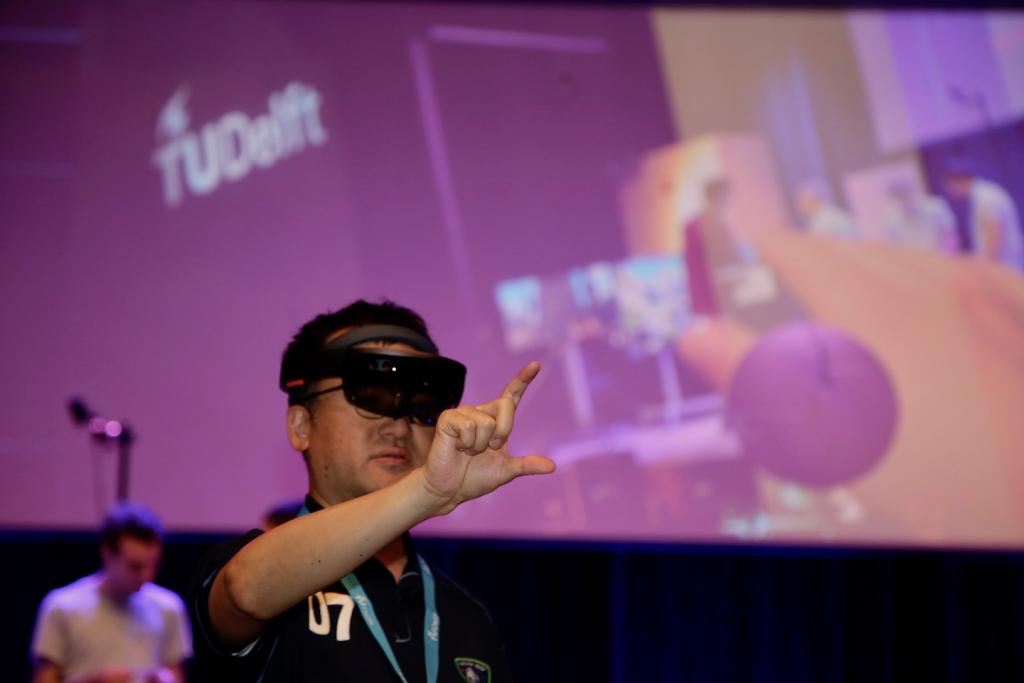 Why should superhuman sports be developed at all?“All sports practised today were invented around 200 years ago, after the industrial revolution. Sports became popular among the general public because workers didn’t have to use their bodies anymore for physical work, so they started to use them for entertainment. We are in a new revolution as some of our jobs will be reduced because of artificial intelligence and robots. We should develop sports using information technologies, where we use our bodies and minds for a new kind of entertainment.”

Could superhuman sports become Olympic games?“Yes, and they will also help democratise sports and end the separation between Olympic and Paralympic games. Superhuman sports are not only innovative but also inclusive. For example, there is not a category for near-sighted people in the Paralympic games because glasses allow us to overcome this obstacle. When technology matures and other items like prostheses improve, we will not need to separate the athletes into categories. This is already happening in superhuman games.” 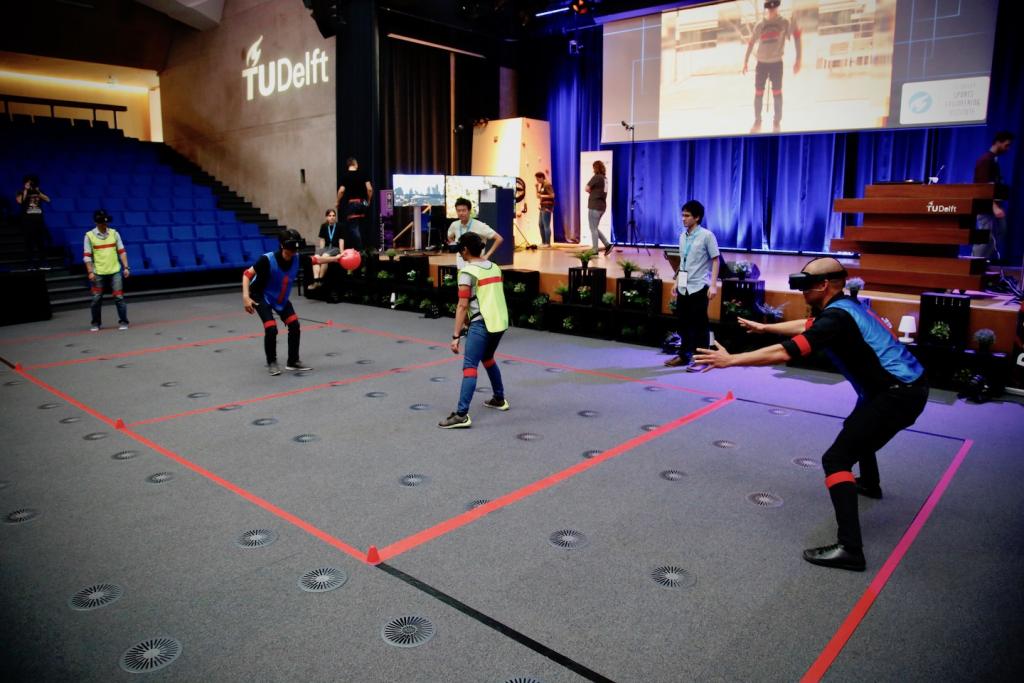 The players in a D-Ball game can only see the red stripes attached to the bodies, the floor and the ball. (Photo: TU Delft)

Half the teams in the challenge are Japanese. Why are superhuman games so popular there?“Superhuman sports have everything foreign visitors, students and researchers like about Japan: pop culture, technology and entertainment.”

Will superhuman sports be ready for playing in 2020?“There are already some official superhuman sports with international players that will compete at an event in 2020, but the games that require expensive state-of-the-art technology will only be exhibited. I think they will be more common in 10 to 20 years, when people who are starting to watch these sports now become athletes and engineers.”

What is Muscle Blazer?“We developed a game called Muscle Blazer which is similar to laser tag or paintball. The players wear a jacket with tubes and sensors and have a weapon to shoot lasers. If the sensors detect an impact, the tubes are filled with air and contract, limiting the movement of the player. Instead of feeling the impact of the paintball, they feel their jacket contract.”

What is special in your game?“Because VR or AR technology is usually very expensive, we tried to use easily available and cheap materials so people can create their own devices at home.”

What do you think about the other games?“They are amazing. I particularly like Venga! where you climb a wall but feel like you are in the mountains.”

Was it difficult to develop Muscle Blazer?“Some elements of the game were already around. For example, we use the mechanisms in the jacket on other wearable devices for research in our lab. We integrated all the ideas we had already developed in the game.”

What do you think about the Design Challenge at TU Delft?“It is a very good opportunity for us to present our product in another country and invite people to an event that mixes sports and technology at the Olympic Games in Tokyo in 2020.”