Solar highways: why the first one will be a cycle path

A study mapping the photovoltaic potential of the Dutch highways says they could power all present electric vehicles and more. Still, there are plenty of practical issues.

Solar must grow. In 2019, the total Dutch solar energy production was 5.2 TWh. According to the Climate Agreement (Klimaatakkoord), that figure should quadruple by 2030. PV installations are found on the roofs of homes (50%), businesses (30%) and solar parks (20%). Roofs are the primary option for expansion, but it’s time to consider alternative surfaces. “Solar panels are not very efficient in converting light into electricity,” said PV researcher Hesan Ziar (Faculty of Electrical Engineering, Mathematics and Computer Sciences). “Therefore, we need more surface area for solar panels, and we need to look for dual use surfaces. Such as roads.” It turns out that even a small country like the Netherlands has 135,000 kilometres of it, of which 1,600 kilometres are highways.

So, imagine covering the entire Dutch highway network with solar cells. You know the sun doesn’t shine all day or all year, there are high buildings and forests casting shadows, and there are cars and trucks moving over it and blocking the sun. How much electricity could be harnessed, all considered? 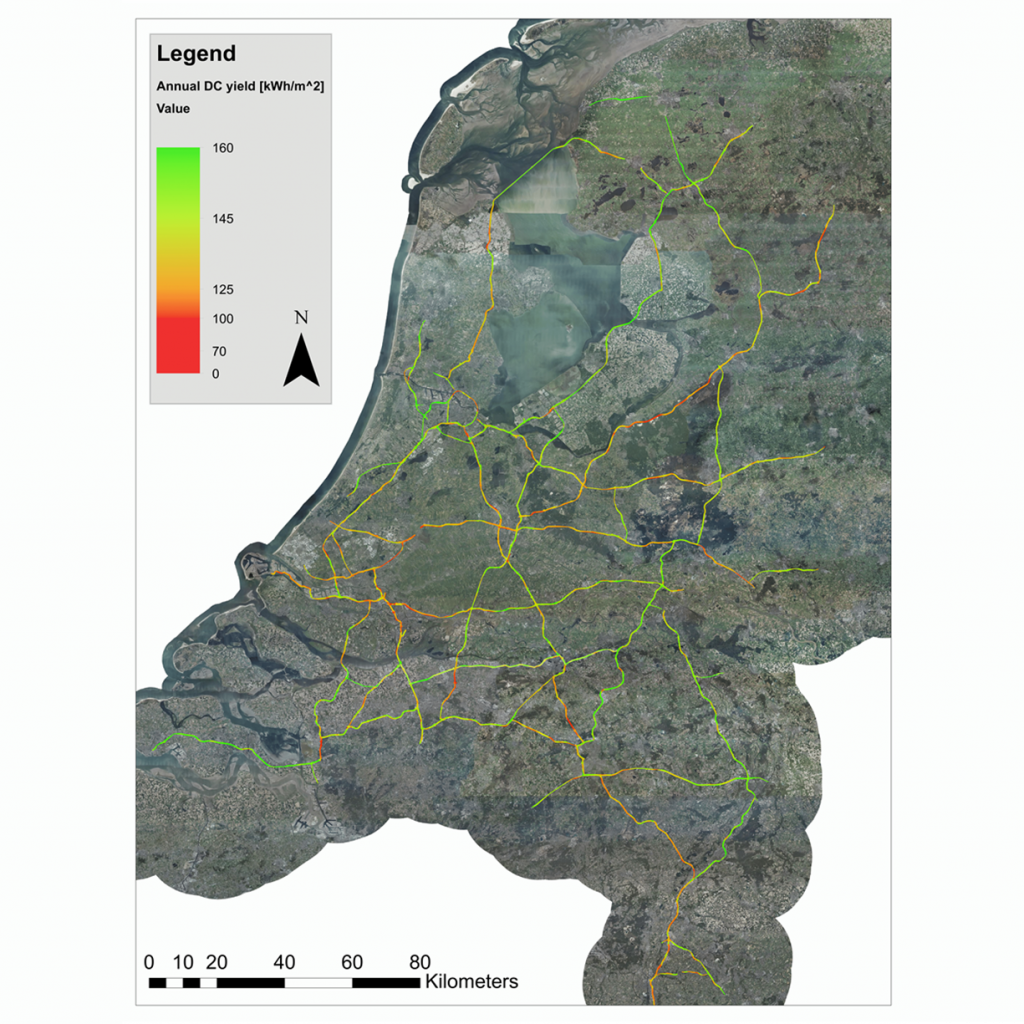 In their article, they presented a Solar Road Map for the Netherlands – not a plan, but a depiction of the average yearly solar production (in KWh) per square metre on Dutch highways. The highest yields (green) come from highways in open landscapes with little traffic. Forests, adjoining high buildings, or heavy circulation casting shadows result in lower solar power production (red).

They calculated that the net solar power production on the highways would be 35% less than optimal (with the PV panels all ideally lined up in the south of the Netherlands). Still, the solar roads could produce 3.4 to 6.6 TWh per year, depending on the solar modules used.

So how much is that? It’s equivalent to 5% of the Dutch annual electricity use (123 TWh). Researcher and co-author Hesan Ziar (EEMCS) offered another comparison: Some 2% of all transport is electrical, using 2.45 TWh per year. In other words, the solar highways could power all present electric transport and have room to grow. 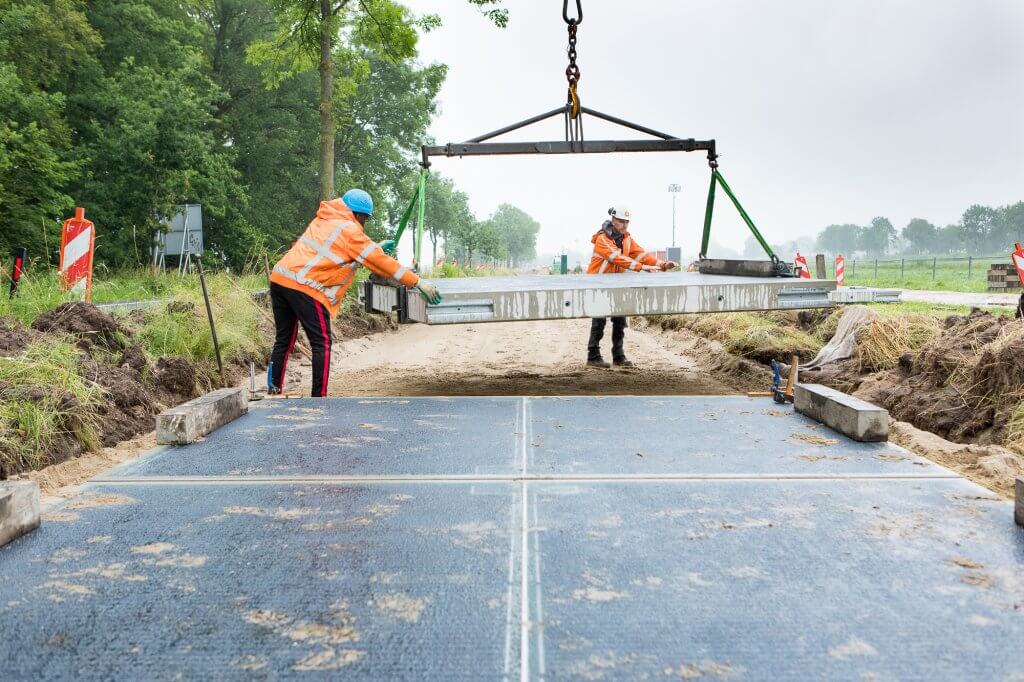 Ruthless reality
Combining delicate solar panels with thundering traffic is quite a challenge, as multiple demonstration projects have shown. The French Wattway, a world premiere, was based on fragile crystalline solar panels in a resin coating added on top of the tarmac of a road in the not so sunny province of Normandy. Ironically, the add-on approach was chosen because it was believed to be cheaper than replacing the road entirely. So, the Wattway opened in 2016 as an appetizer for the Paris Climate Summit later that year.

Only three years later, the Wattway was widely considered an expensive flop and the most expensive road ever. The 1 kilometre of solar road had cost € 5 million, but it wasn’t up to the tractor tires crossing it. A French newspaper described the state of the road as ‘solar panels that peel off the road and the many splinters of enamel resin protecting photovoltaic cells.’ A similar project in China had an even shorter lifespan. Less than a week after the opening, officials found that someone had stolen the solar panels from the road.

The Dutch company SolaRoad has learned by doing. Their integrated system is based on concrete slabs covered with solar cells in epoxy. After a promising start with solar bicycle paths, things went wrong with a bus lane in Spijkenisse, from which large flakes detached in 2019. The company then decided to return to bicycle paths. 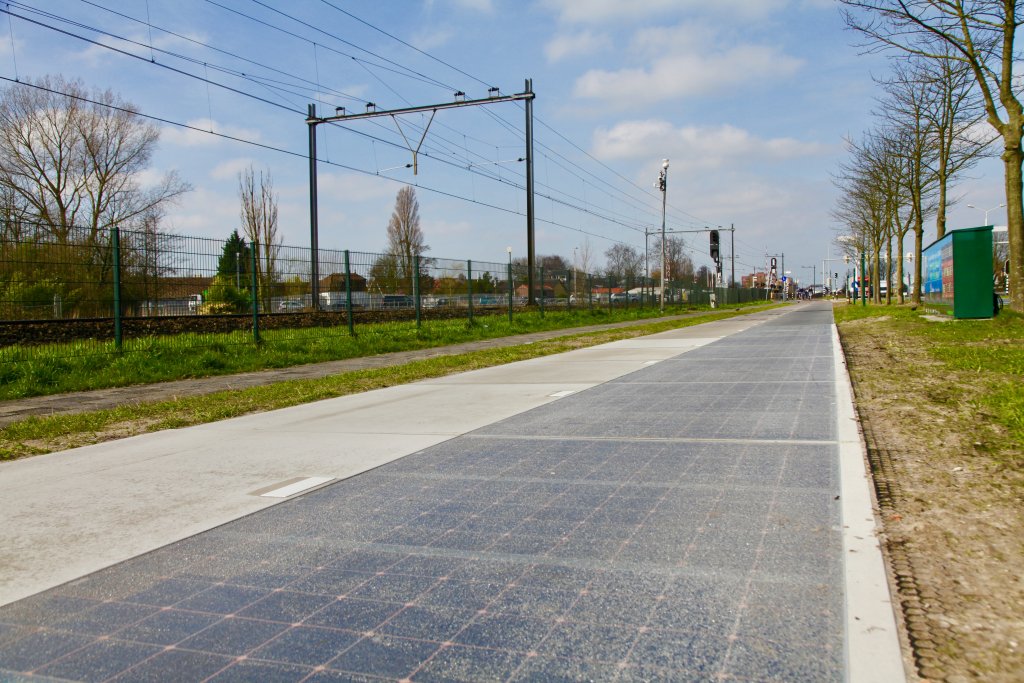 Bicycle breakthrough
Electric bicycle paths are an obvious choice for Dr. Ando Kuypers, solar technology and applications program developer with TNO in Eindhoven. He likes to talk about the longest solar bicycle path to date near Maartensdijk. The villagers there, so he heard, didn’t want wind turbines in their vicinity, and preferably no solar meadows either. But no one objected to the 350 metre PV-covered cycle path – the longest stretch in The Netherlands to date.

“Yes,” he admitted, “a solar cycle path is more expensive than installing an equivalent number of PV-panels. But that will change with scale.” He also pointed out that social acceptance is higher when PV technology remains out of sight.

Kuypers was quite sceptical about integrated PV at first. “Better put solar cells alongside the road than on top of it,” he thought. But recent developments have changed his view. One of these is the development of alternatives for asphalt (including transparent ones) by chemical companies. These substances allow roads to be paved with a green or red cover, but without colouring, the resin is perfectly suited to accommodate solar cells.

Another development, that Kuypers is involved in himself, is the emergence of the thin film solar cell. It is the technology of choice for the Interreg project Rolling Solar for which a test site has been set up at the Brightland Chemelot campus of the University for Applied Sciences ZUYD in Geleen. Thin film is less vulnerable, more flexible, and easier to integrate into the road surface than the fragile crystalline silicon of yesteryear. 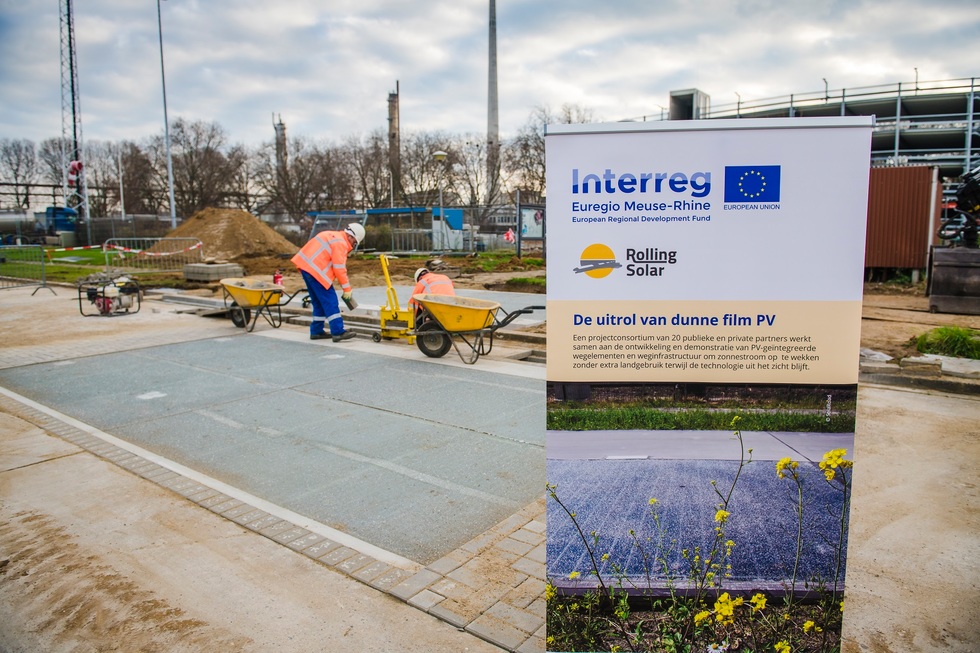 On top of that, a sustainability programme Duurzaam GWW has started in the Netherlands with the aim of making the roads, railways, and waterways more sustainable. The Department of Waterways and Public Works (Rijkswaterstaat) has aimed to make new infrastructure self-supporting in energy – for example, by integrating solar cells wherever possible.

Kuypers thinks solar bicycle paths will be the first successful application of solar road technology. Long distance cycle paths are popular because they offer fast and unhindered access to city centres. They may help reduce commuter traffic, since electric bicycles in particular extend the distance that people are willing to travel by bike. Plus, PV cells on the road seem to be the least obtrusive form of sustainable energy.

Arian de Bondt, director of SolaRoad, has done some sums. “The Netherlands has an estimated 35,000 kilometres of bike paths. If we incorporate solar cells into all of them, we can generate some 15 TWh of electricity a year. The benefits are obvious.”

That would be about three times more energy than may be expected from the 1,600 kilometres of highways. So, the potential that cycle paths offer is larger at only a fraction of the wear. That’s why the first long stretch of solar road will probably be a cycle path.