Four PVT-panels on the roof of the left house in the Green Village produce enough heat and power to keep the house warm and gas-free during the winter. (Photo: Zonnet)

For a month now, a test unit has run in the attic of one of the houses built in the 1970s in the Green Village. A couple of barrels of water act as geothermal heating. It is a solar heating consortium project of which TU Delft is a part. The partners already dare say that a neighbourhood with older homes with B or C energy labels can be heated without using natural gas.

Calculations show that PVT panels (solar panels with an in-built heat exchanger) combined with a heating grid would deliver enough heat to heat the home and the water. On top of this, the PVT panels would deliver enough electricity to run the system’s pumps, including the heat pump. The remaining heat that the panels would generate from a few hundred houses in summer would be stored in the groundwater. This is the framework for the solar heating grid (in Dutch) which could make millions of older houses in the Netherlands climate neutral.

InnovationPVT panels and heat cold storage in groundwater are well-known techniques in sustainable heating. The innovation in this system lies in the low temperature heating grid, explains Dr Ivo Pothof, a specialist in smart heating grid systems at the Faculty of 3mE and at Deltares. 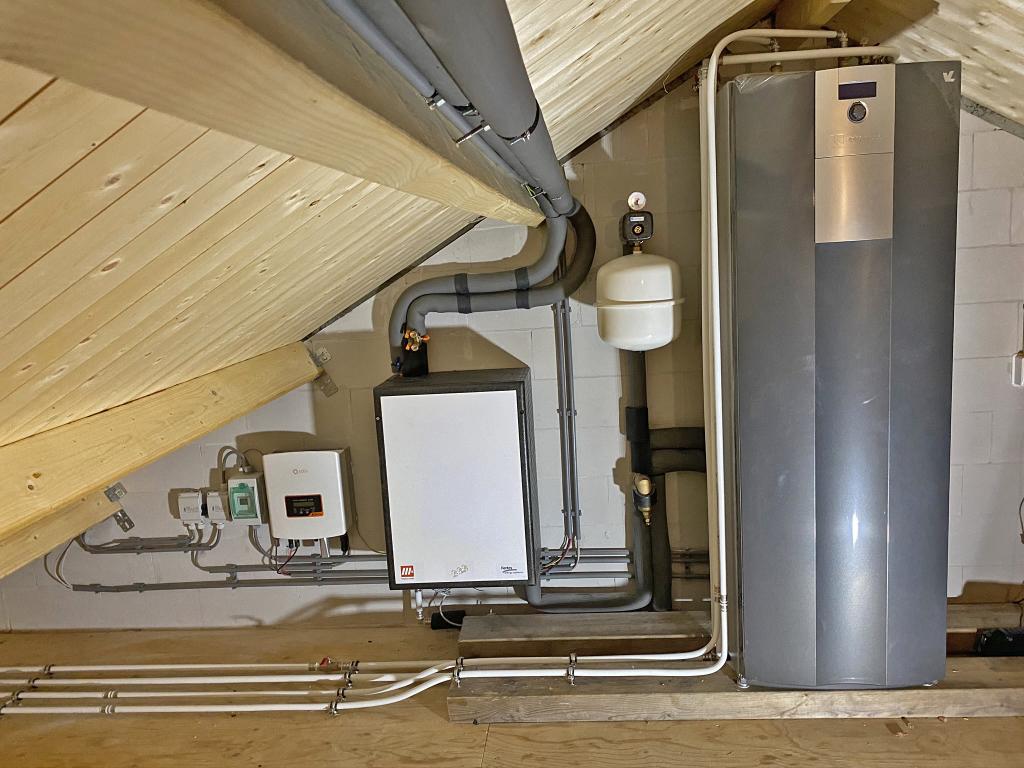 The ‘delivery unit’ is all the equipment that a household needs to be connected to the new low temperature heating grid. It is a small cabinet with pipes, pumps and valves that ensure that the heating from the heating grid and the PVT panels are optimally used. The household also needs a heat pump with a storage vat (a tall grey cupboard), four to six PVT panels and everything needs to be fitted. Pothof estimates that the cost of the communal hot cold storage for a couple of hundred homes would amount to “a couple of thousand euro per household for 20-30 years”. Once fitted, there are no consumption costs. The only costs incurred would be maintenance and, after a while, replacement of parts.

The key question of whether this heating grid system would be cheaper than heating with a high efficiency condensing boiler may not be entirely honest, but it is imperative in choosing which system to install. The comparison is not honest because the benefit of saving an average of 1,500 (in Dutch) cubic metres of gas per household would primarily be for the climate goals, while the equipment needed must be paid for. Whether that is cheaper or more expensive than the monthly gas bill depends on the interest rate, says Pothof. If the interest rate is 4-5%, it will be more expensive for the household while if the interest rate is 1.3-1.5%, it will be cheaper. Municipalities can arrange low interest rates with the Bank Nederlandse Gemeenten (a bank of and for the Dutch public sector) if they are part of a relevant housing corporation.

The plan was made for the Ramplaankwartier neighbourhood in Haarlem, but will it actually be built? “The residents are really keen,” says Pothof, “so we hope that it will work out to get a low interest rate to make it attractive for the residents. There is now a basic design (in Dutch) and a manual that can be applied anywhere. More than half the Netherlands has ground that is highly suitable for storing solar heating.”

Other TU Delft researchers involved in the project are Dr Sabine Jansen and Dr Saleh Mohammadi, climate installation experts at the Faculty of Architecture and the Built Environment, and Dr Martin Bloemendal, specialist in hot cold storage at the Faculty of CEG.

For the fans: the connection scheme for the solar heat grid. (Image: Zonnet)