Size matters: science on board the Sleipnir

It is a rarity to have the Sleipnir in Dutch waters. (Foto's: Peter Meijers / David Fidalgo Domingos / Panagiota Atzampou)

What is it like to do research on the world’s largest crane vessel? Only a handful of people in the world can report this first-hand. Among them three scientists at TU Delft.

The Sleipnir is a semi-submersible crane ship of staggering proportions: 220 metres long, 102 metres wide - more than twice the length of the football field in the Amsterdam Arena and one and a half times its width. The 119,000 ton vessel sails across the oceans of the world for the toughest of all offshore installation jobs – Sleipnir is not only the world’s largest crane ship, but also the strongest: together, the two cranes have a lifting capacity of 20,000 tons, equivalent to the weight of two Eiffel Towers. 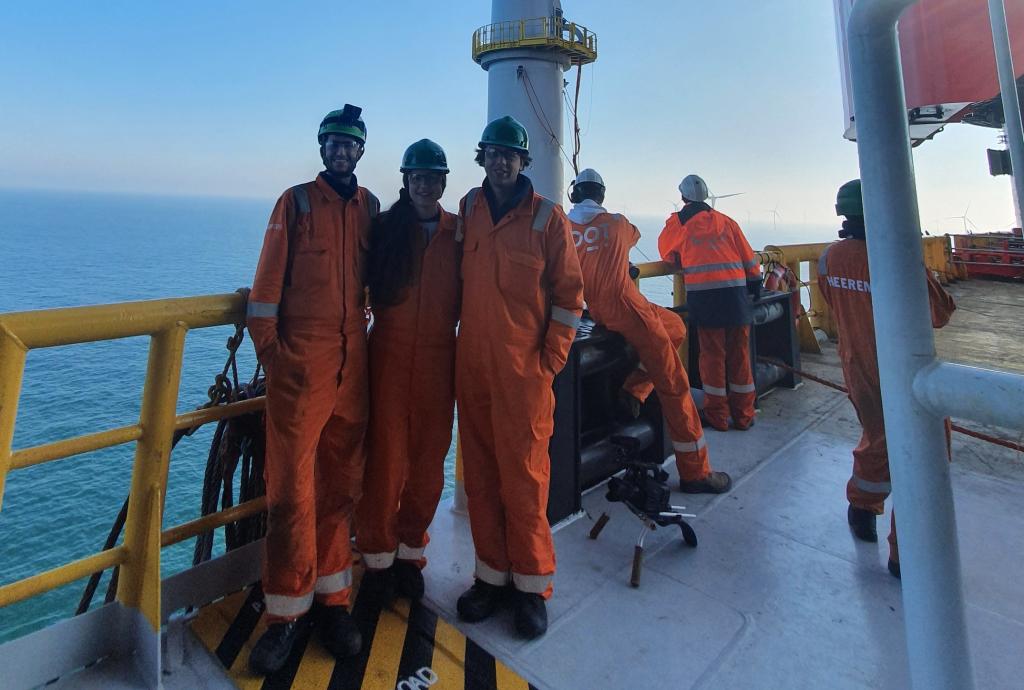 Recently, postdoc Peter Meijers (right on photo) and PhD students David Fidalgo Domingos (left)  and Panagiota Atzampou (middle) embarked the vessel for multi-day research for the FOX project, which is working on developing an alternative installation method for offshore wind turbines. One of the participants in the project is Heerema Marine Contractors - the owner of the Sleipnir, worth an estimated USD 1.5 billion. This explains this exceptional opportunity for the three researchers

Preparations
They did not have it handed to them on a silver platter, though. Doing research on the Sleipnir required a five-day safety training course, including a helicopter escape training course, in which the researchers learned to free themselves from a flooded and upside-down helicopter simulator in a swimming pool (the researchers were due to board the Sleipnir by helicopter). In addition, they followed a multiple day training course to work safely at high altitude – aboard, Domingos climbed to about 120 metres above the water. And finally, just before embarking, a corona quarantine of Olympic proportions: five days in complete isolation in a hotel near Schiphol Airport.

And another ordeal was yet to come: getting on board. Not by helicopter as initially planned, but by climbing up the vessel. Some forty metres up from the quay in Rotterdam on a staircase consisting of no more than three iron bars, which you can look right through into the depths. "A unique but terrifying experience," Atzampou describes. "I felt really small compared to the vessel."

Alienating
Life on board was also incomparable to anything. First of all because of the alienating dimensions. Meijers says that "The size was really impressive the first couple of days. Everything is big on deck - you cannot stop looking at it." The tight schedule also contributed to the feeling of being somewhat detached from reality. "It's a 24/7 operation, nothing stops. And the sense of day and night is kind of twisted because of the 12 hour shifts: from 00:00 to 12:00 and from 12:00 to 00:00. You lose track of normal days," explains Atzampou. Domingos adds that "I honestly lost count of how many days we spent there. Eleven, 12 days?"

Even though they weren’t that far away, 30 kms offshore, near Prinses Amalia Windpark (“we could see the shore”), life on board was like living in a small and very remote village, the researchers explain. “This was also because communication to land was tricky. The internet was sufficient to send some text messages once in a while, but video calls or phone calls were impossible,” Domingos says.

They shared their time on board with approximately 250 people, a mix of Asian and European offshore professionals. “Mostly men, yes – but quite a few women. I’m the only woman in the FOX project group, but not on board. I was happy to see other women as well,” Atzampou says.

Problem solvers
Sleipnir is full of contrasts. Inside, the ship is like a hotel, with an Asian and a European kitchen serving really good food. The atmosphere is clean, calm and nice. “You depend on each other, so everybody is kind and polite. Everybody says hi when you walk by. I missed that when I went back onshore,” Meijers explains. Atzampou experienced the same thing. “There is a very big contrast between the friendliness and openness on the vessel, compared to normal life where everybody is more on their own.”

On deck, it’s loud, noisy, a bit dirty. “There is stuff going on constantly – even when there is nothing going on. The deck workers are always doing something. They are really straightforward. They never create problems, only solve them. Safety is everything. They are the most pragmatic people I have ever worked with. ‘No, don’t do it this way, do it that way’ – and they were always right,” Domingos smiles. “Not much of what we had planned really happened because they always came up with a better way.”

Mesmerised
Was it like a child’s dream come true to do research on a vessel like Sleipnir? Domingos is quick to answer. “For me, yes. I have liked these sorts of environments since I was a kid.” Meijers adds that “It was nice to have experienced it, but I know now it is not the life for me.” And Atzampou? “I was mesmerised, I would say. Sometimes it is like it never happened. But we have data and we have photographs. I really was there.”