Should we worry about province-sized icebergs splitting from Antarctica?

Scientists assign each iceberg that splits from an ice shelf a name. The iceberg in this picture is not the iceberg described in this story. (Photo: Hubert Neufeld/Unsplash)

An iceberg as large as Flevoland split from Antarctica last month. Three years ago, there was one at least three times bigger. What do they say about climate change?

Last February, a mega-sized iceberg, A74, calved from the Brunt Ice Shelf, Antarctica. It started drifting its way north, possibly taking the same route as A68a, an even bigger iceberg about three times the size of A74. A68a floated around for about three years until it fragmented into pieces near South Georgia Island, a few weeks before A74 began its journey.

Looking at their sheer sizes, one wonders whether these mega-icebergs are consequences of climate change. Stef Lhermitte, an Assistant Professor at the Geoscience and Remote Sensing Department, sheds light on this question. “Iceberg calving is a natural phenomenon, and so are those icebergs. They are not caused by climate change. A link with climate change would depend on the calving location and what causes the calving event.”

How the pole calves
The iceberg calving process begins when masses of snow from Antarctica’s mainland drift outward to the continent’s edges. Over time, the weight of the piling up snow puts increasing pressure on the ice shelves – layers of floating ice that are still attached to land. Lhermitte continues: “In East Antarctica, the ice shelves grow very slowly over a long period of time, and when they calve, they lose a large part in one go. This, to us, looks very dramatic.”

Scientists assign each iceberg that splits from an ice shelf a name. The first letter comes from two axes that divide the continent into four sectors: A (0 to 90 West), B (90 West to 180), C (180 to 90 East), and D (90 East to 0). The number that follows denotes the order of the iceberg’s discovery. Another letter is added if a floating iceberg breaks up, like A68a that broke off from the original A68. 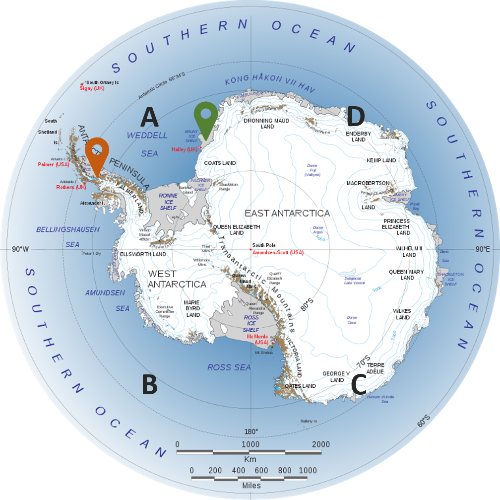 A map of Antarctica showing the four sectors, along with A74 (green marker) and A68 (red marker) ice shelves. (Photo: NASA in Wikipedia)

The vital ice shelves
While East Antarctica and the A area where A68 and A74 originate still have natural calving events, this is not the case in the B area of West Antarctica. Lhermitte and fellow TU Delft researcher Bert Wouters researched and published a paper last September about ice shelf instability in the Amundsen Sea. “The area is clearly out of balance, as shown by changing calving patterns. Warmer ocean waters are weakening its ice shelves which then produce smaller but more frequent icebergs instead of the normally larger, tabular ones,” says Lhermitte.

Losing ice shelves is dangerous because it contributes to sea-level rise. While the melting of icebergs and ice shelves does not affect sea level, since they are already afloat, it may have ramifications on the shelves. “As we lose the ice shelves, the snow masses from the mainland will rapidly start to drift directly into the ocean. The ice lost by the continent can exacerbate sea-level rise,” warns Lhermitte. “But at present, we don’t see any worrying major changes in the ice shelves.” 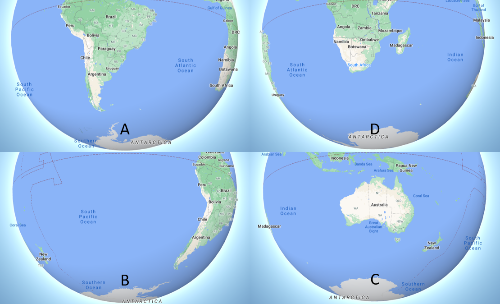 The globe view of the locations of Antarctica’s four sectors. (Photo: Edited from Google Maps)

A sandbox
Meanwhile, what will be the future of A74? Will it run aground near South Georgia Island or break up and melt safely like its forerunner A68a? If the former happens, the iceberg may affect the island’s wildlife. For example, if penguins and seals have to pass the stranded iceberg to forage, the additional time and the long journey mean a higher risk of starvation for their chicks and pups.

Nevertheless, scientists can utilize a stranded iceberg as a testing environment to learn about climate change at a micro-scale. “The iceberg can be a sandbox to gauge the possible effects of climate change on an ice shelf,” summarises Lhermitte.

‘Not even one aviation plan meets the Paris Agreement’

‘I couldn’t go to my father’s cremation’

PhD student Vibhas Mishra was stuck with his in-laws in India last year. Where is he now?
Science

The Netherlands does too little research into artificial intelligence (AI), warns the Rathenau Institute. More research is also needed in the rest of Europe.