Seven answers about the cameras on campus

The G4S cameras will be switched off at the end of October. (Photo: Dalia Madi)

The cameras in busy campus areas are still heavily debated. Youth parties have now sent a letter to the Executive Board. What is in the letter? This and six other questions.

1. What are the organisations writing?
The youth political organisations, like TU Delft, consider it important to protect the health of students, staff and visitors. But they assert that using cameras goes too far. They question whether the cameras would still be needed if there were more staff from the security company G4S cycling around. They also want to know why TU Delft has chosen to deploy this particular model of camera that has ‘privacy unfriendly’ images. Instead of these cameras, they would rather have extra sensors such as those currently used for TU Delft’s mobility research. “This system converts the images in the sensor into ‘privacy-proof data’. The researchers thus do not have access to the camera images but do obtain the required information,” they explain. They would also rather have TU Delft evaluate the cameras now than at the end of October. “We are concerned that the cameras will soon be seen as a successful part of the restrictions and will be kept longer.”

2. What is the response of the Executive Board to the letter?
Delta presented the letter and the youth organisations’ questions to Karen Collet, the spokesperson for the Executive Board. The Executive Board received the letter but had not yet responded, she informed Delta on Tuesday. So there will as yet be no answer to the question whether the cameras could not be evaluated now. Collet did answer the question about the use of sensors instead of cameras. “Deborah Nas’s mobility camera system was not available at the time and it only covered a small part of the campus. But it was considered.”

3. Why is TU Delft using cameras and not additional security staff?
TU Delft does not believe that the deployment of only personnel is enough, explains Operations & Facility Management Programme Director Peter Weijland. “Last summer we looked at a lot of options which we wanted to deploy as efficiently as possible. These could be traffic controllers and enforcement officers for example, but cameras is also an option. The added value of cameras is that as they are fixed high up, they can cover a relatively large area. So at a glance you get a different view than staff who are on the ground cycling and who can only see what is around them. We believe that having these images means that the enforcement officers can be sent to the right place.” 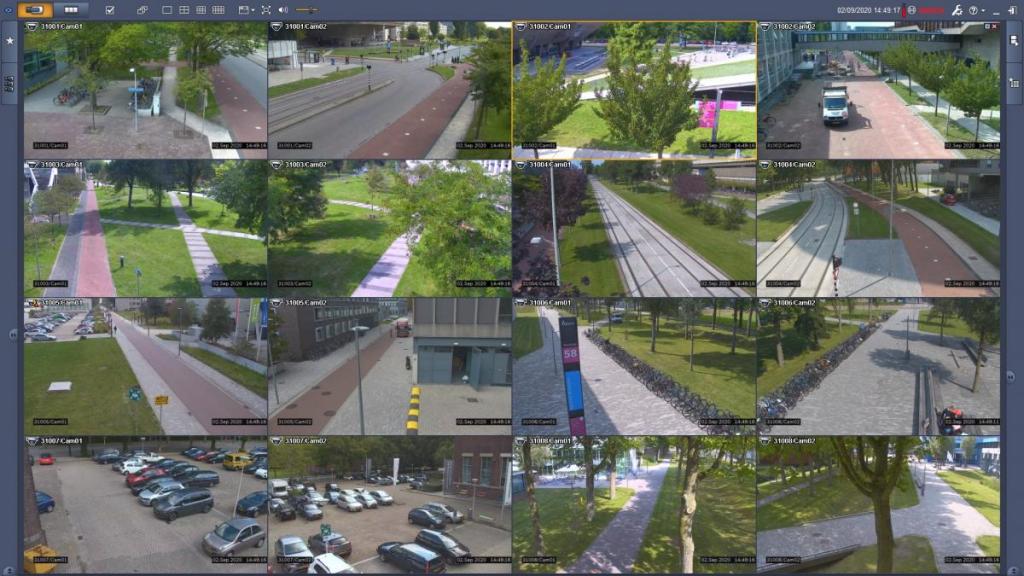 This is the view from the control room. (Photo: TU Delft)

4. What measures can TU Delft take in response to the camera images? This could be anything, from brief responses to more long term measures if a place is repeatedly congested. Weijland says that this ranges from temporarily diverting cyclists to rolling out a plan to make the Mekelweg one-way traffic. He continues, saying that “These measures have not yet been necessary. The Emergency Call Centre has only needed to send out stewards a couple of times to the entrance of a building and other busy spots.”

5. How temporary are the cameras? Local political parties are concerned that the cameras will stay.
According to both Peter Weijland and spokesperson Karen Collet, TU Delft is still intending to turn off the cameras on 31 October and then remove them. TU Delft will evaluate the use of the cameras at the end of October. The date is as yet not known. Weijland explains that “We will then discuss issues such as the information that the cameras have generated for the Emergency Call Centre and whether they did what we expected them to do.” Weijland brushes away the concerns of the youth organisations that during the evaluation TU Delft may decide to keep the cameras. “The purpose of the meeting is not to keep the cameras longer or to get them back.”

6. TU Delft thought the cameras were needed to safeguard the health of campus users. What will the situation be after 31 October?
Weijland says that the cameras allowed TU Delft to see that it was possible to maintain the one-and-a-half metre social distance ruling almost everywhere. “As the restricted number of students and staff made it very quiet and empty on campus, there were no major points of congestion. We did not know that in advance.” He believes that this means that the cameras will not be needed anymore after October. “We can downscale the level of monitoring without it affecting safety.”

7. Last month, political parties STIP Delft and D66 questioned the municipal executive whether TU Delft was permitted to install cameras that would partly record public space. Has an answer been received?
Yes, the Executive Board passed on the answers at the beginning of this month. To the question about recording public space, the municipality answered that ‘TU Delft may install cameras on its own property as long as the interests of various parties have been considered in advance. Given the privacy legislation, they are responsible and will have to underpin their arguments for the need for camera surveillance and for what purpose. The municipality is not the enforcement body in this case. The Dutch Data Protection Authority can check if the cameras and the way in which the images are processed meet the requirements of the privacy legislation.’ The municipality also writes that it had been informed by TU Delft about the placing of cameras.

TU Delft staff may vote in the Works Council elections on 3 and 4 November. But who to vote for? The nominees introduce themselves in this series. Part 3: Marleen Keijzer.