TU Delft’s lecture halls are getting an upgrade. More and more of them are being equipped with digital boards. “We have to prepare for the digital world of the future.”

Hundreds of first-year students are gathered in lecture halls A, B and C at 3mE. They are learning about jumping trolleys. The lecture is the official kick-off of a design project. Part of the faculty building will be transformed into a racetrack featuring an obstacle over which the trolleys, designed by students, jump like kangaroos

In the Leonardo da Vinci hall (hall A), lecturer Anton van Beek is explaining how to design a reliable transmission for the trolley. Students can also watch his lecture in the other two halls, on large projection screens. To the familiar ticking sound of chalk on a blackboard, he writes down a series of mathematical equations. Yet there is no chalk dust, while students are spared the gut-wrenching noise of chalk-on-blackboard. Van Beek is writing on a digital board.

The digital board, or smartboard, is becoming increasingly popular. The first ones arrived at TU Delft eight years ago. Now there are 47 of them scattered all over campus.

“Smartboards are used in most lectures,” says student Lynn de Lange, who is taking Van Beek’s course.
She’s very excited about them. “The subject matter is often easier to read than on a blackboard, and you can save it for later reading.”

Write, copy, save
If you can write with chalk, then you can write formulas just as easily on a touch screen. That’s the idea. You use one of the special pens that stick to the bottom of the board with magnets. And you can use your finger to copy, save or move a formula. You use your palm to erase.

“It’s easy to use,” says lecturer of mechanical engineering Anton van Beek in between all the work. “If the connections are working properly, that is,” he adds quickly. “I was here 30 minutes before class to make sure everything was in working order. Occasionally, the computer fails to connect to the smartboard. Things like this may cause a bit of stress going into the lesson.”

A few halls further on, Peter Naaijen, a lecturer in ship hydrodynamics, is cleaning a whiteboard. He’s just finished his lecture. “I’d rather use a real pen or chalk,” says Naaijen, “I went to an introductory session a few years ago to learn how to work with these boards. But it takes some fiddling with the connections. I’m not an early adopter. But in the long run I’ll have to get used to it.”

Piet van der Zanden agrees. He works at ICT & Facility Management and specialises in the application of audio-visual technology in education. He is one of the driving forces behind the modernisation of lecture halls.

“In 2011, we and a large group of lecturers – including mathematicians, mechanics and physicists – started looking for an alternative to the chalkboard,” says Van der Zanden.

According to Van der Zanden, the chalkboard is ideal for what he calls ‘chalk-writing didactics’. “If you just present a calculation in PowerPoint, the students won’t understand it. You have to slowly build up to something like that by writing out the sum on a board, step by step. But then again, all that chalk dust... Something had to be done about that. After all, it’s bad for your health, while cleaners are spending too much time cleaning up all the mess. Whiteboards became popular some 20 years ago, but they weren’t much of a success. The contrast was poor, and the pens dried out quickly.”

Smartboards are designed to solve these problems. “And more importantly,” adds Van der Zanden, “these smart boards help lecturers to prepare themselves for the digital world of the future. Digital writing skills are essential for methods that involve both physical and virtual students, for example MOOCs, blended learning and hybrid classes.”

“The image on the smartboard is enlarged and projected onto a screen,” continues Van der Zanden. “The lecturer can divide this central image into four quadrants to project something different on each of them. For example, you can add a proposition to the top left, then substantiate this proposition with a series of formulas on two other screens, and on the last screen you can display an animation of the formula and create a graph. You can use a smartboard to present a whole body of evidence in a logical and easy-to-follow sequence.”

This may sound promising, but plenty of lecturers still have cold feet. In one of the halls at 3mE, we came across a mobile chalkboard covered in formulas – despite the fact that it is actually only there as a back-up in case of a power cut. 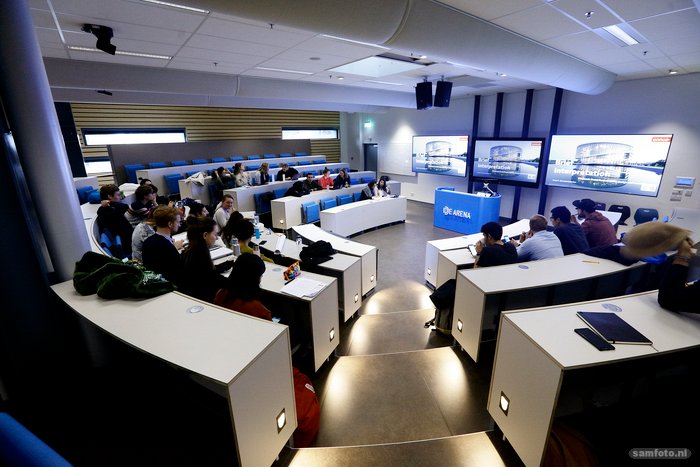 A modern lecture hall at the Faculty of Industrial Design Engineering.

Metamorphosis
The modernisation of lecture halls is in full swing. It is part of the so-called transformation plan launched in 2015. In that year, it was decided that the majority of the faculties’ lecture halls (180 in total) would become part of a large, centrally managed pool of rooms, meaning that the available space could be used more efficiently. As such, lecturers and students are no longer tied to their own faculty building.

Swarming around campus, they are assigned rooms to match group size and teaching method. This means that lecturers have to get used to teaching in different rooms all the time. How do you turn the light on and off? And how do you hook up your laptop? It’s different everywhere. All the rooms are therefore being redesigned according to a standard plan. This transformation plan is due to be completed in 2024.

Last summer, it was CEG’s turn. Themara Bogerd from Education Logistics and Paul Uiterdijk from CRE Strategic Campus Management were closely involved in the metamorphosis. We caught up with them in hall A at CEG.

Training
The first thing we noticed are the new chairs, which offer just a little more leg room and all have power sockets. Felt wall lining provides better acoustics. The control panel is also new. It is exactly the same as the control panel used in other lecture halls that have already been revamped. In the corner there’s a smartboard. But, surprisingly, the chalkboards haven’t disappeared.

“Never force people to use new technology, expecting someone who has always used chalk to start using a smart board overnight,” says Uiterdijk. “We set up a programme to help lecturers who want to make the switch,” adds Bogerd. “At the start of each new quarter, we find out which lecturers haven’t been assigned to a room before. We offer them training, which covers both the technical side of using digital tools as well as teaching skills. But they can still use chalk if they want. Some lecturers will always prefer to fill an entire chalkboard with notes and formulas.”

English-language teaching: the show must go on

The government says there are five good reasons for maintaining English-language teaching in higher education. English studies will have to meet at least two of these.
Education