Two quantum bits can communicate, but three entangled qubits is a network. QuTech researchers demonstrated how this works last week in Science.

Eight years ago, QuTech researchers led by Professor Ronald Hanson (Faculty of Applied Sciences) made headlines by entangling two quantum bits (qubits) in a diamond. A synthetic diamond had been adapted to allow an electron spin to be used as a qubit at very low temperatures (269 degrees below zero). Two years later, they showed that entangled qubits actually share information, and another year later, the research group demonstrated that information exchange through entanglement travels faster than light - something that Einstein had dismissed as spooky interaction at a distance.

Entangling two qubits has become routine for QuTech researchers such as Matteo Pompili and Sophie Hermans, the first authors of the most recent Science article. But creating a network - the first step towards a quantum network - requires the controlled entanglement of three qubits. And that is exactly what the QuTech researchers have demonstrated this time. Step by step, they built a triangular relationship between quantum bits Alice, Bob and Charlie.

To establish a connection, the node of a quantum network (Bob) needs two qubits. (Video: QuTech)

From there they could go two ways. In one application, thanks to the entanglement, the three qubits share the same quantum information. According to the researchers, this can be used to synchronise atomic clocks.

In the other application, Bob takes a step back as the intermediary and the entanglement between Alice and Charlie remains, although they are not physically connected. This type of connection is the prototype of the unbreakable connection that makes the quantum internet so promising.

The next step is to establish the same triangulation outside the lab in an existing telecom fibre: QuTech's Quantum Internet Demonstrator. Next year, the researchers hope to use it to establish the first quantum internet connection between cities. 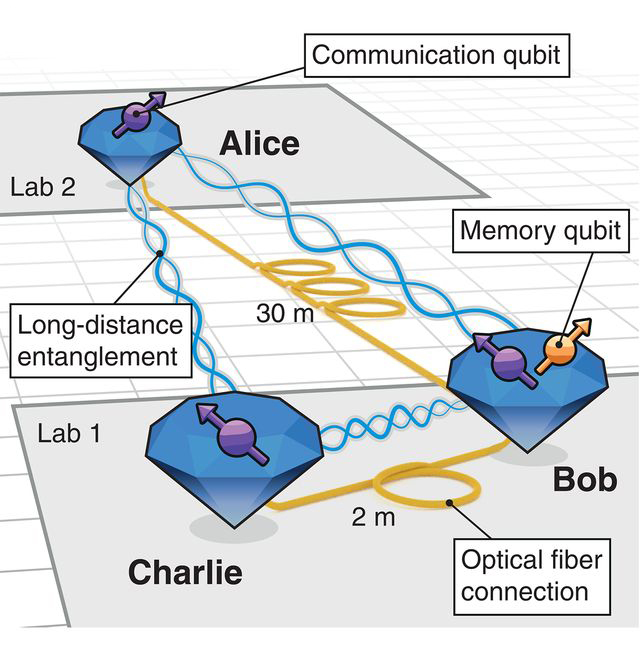 (Illustration: QuTech in the Science article)