‘Saying no is a skill too’, emphasised Queen Máxima. (Photos: ©MIND / Robin Utrecht)

Last Thursday, Queen Máxima visited the Time Out Café in Theater de Veste. She talked to students about stress, the pressure to perform and the corona crisis.

Concentration problems, insomnia, tension, headaches and dreading the next day. More than half the students put their hands up when asked who had at least two of these symptoms. It was the opening of the one-time Time Out Café in the Theater de Veste in Delft, an interactive performance for and by students about stress, the pressure to perform and studying during and after the corona crisis.

The Café is an initiative of the Time Out Foundation and Lieve Mark (dear Mark), a student collective that researched the impact of the corona restrictions on young people during the corona crisis and the consequences on their well-being.

Magnified problems
The pressure to perform is a recurrent theme throughout the evening. While the performance clearly shows the impact of the pandemic on the well-being of students (more drink and drugs and living life through a screen), the corona crisis also magnified many existing problems. The students discuss this after the performance with members of the Outbreak Management Team including Diederik Gommers (Chair of the Dutch Union for Intensive Care), higher education administrators and politicians. Queen Máxima joined two discussions.

In a discussion about life with and after the virus, the Queen wanted to hear from the students how they picked up their lives after living it for one-and-a-half years very differently. What lessons have they learned and what would they do differently should another crisis arise? “During the pandemic, a large group of students saw that their lights could suddenly go orange,” said one student. “The pandemic disrupted everything and magnified existing problems.”

‘Saying no is a skill too’

All the students present agree that student life in itself brings a lot of pressure, even without the corona crisis. Not only is studying hard in itself, but also working on your CV and feeling that you have to get the most out of your student time. Queen Máxima says that it sounds familiar but urges them to make choices. “Learn how to deal with stress and know when to stop.” When asked if the Queen recognises these signs in her daughters, she says no. “They are not yet at university, but I do recognise the phenomenon of wanting too much.”

Vice Rector Magnificus Rob Mudde also attended the discussion. He notes that young people in this society often feel pressured. He understands that students who feel under pressure partly put this down to FOMO (fear of missing out), but advises them to skip something once in a while. “Saying no is a skill too,” adds Queen Máxima. 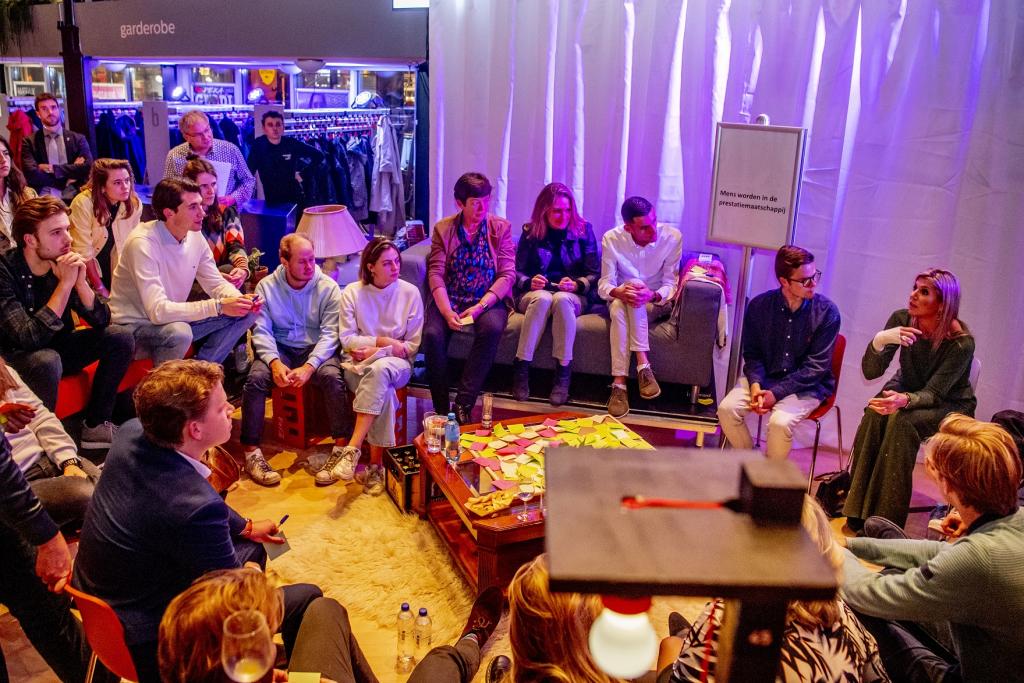 During the ‘being human in the performance society’ discussion.

A relief
The Queen discusses ‘being human in the performance society’ with other attendees. They talk about the definition of success and the pressure that young people put themselves under. The attendees suggest solutions to reduce the pressure in the session that is co-facilitated by Job Vlak, former Chair of the TU Delft Student Council. They would like more flexible education and more attention paid to the development of ‘soft skills’ such as presentation skills, creativity and stress resilience.

After the event, Leiden University students Maxim (medicine) and Simon (history) say that it was a relief to be able to talk about student problems like this. “It’s good to know that you are not the only one that found it hard during the corona crisis,” says Simon. To Maxim, the gap between the older and younger generations was particularly striking. “Diederik Gommers asked us why we do not draw on our own qualities more instead of constantly wanting to stand out. That got me thinking.”

Educational institutions make considerable use of Big Tech companies such as Google and Microsoft. Education Minister Van Engelshoven is in favour of a European alternative.
Campus

Though they experienced it in different ways, students Eduard Ma and Raman van Wee both say the NAHSS programme is a great opportunity.
Campus

Fact-finding and being independent of what others say were the reasons that Delta dived deeply into TU Delft’s relationship with China. It was a prize-winning formula.