In the immense sports hall at X, the chance of being hit seems small, but still, attendees and participants regularly have to buck when a plastic wing inevitably heads towards them. Other planes hit the ground after a wild turn, scrape against the ceiling or simply fly into the wall. "It‘s a good thing we don’t grade this part," jests engineering lecturer Paul Roling, "otherwise half of them would fail."

On two days, 11 and 12 January 2021, representatives of 40 first-year project groups will come here to demonstrate their creations. Two students in each group will be present while eight others will watch via a livestream and an audio connection. That is how it goes in times of corona. Each group produced two devices: one according to the course manual and the other ‘improved’ at their own discretion.

Jonas van Waveren and Jeroen Hilker live closest to Delft, so they get to fly today. At last they are able to see the result of their work over the last three months. Each project group built its wings in the Fellowship building by using a glowing wire to cut the profile out of a block of white plastic (extracted polypropylene). Each plane is equipped with a minute receiver, battery and two electric motors with propellers.

‘It flutters too much’

"We made the second plane twice as wide," says Jonas. "The wingspan became twice as long, so the design became narrower and thinner." The intention was that this would keep the aircraft in the air longer. And it did. But they did need the entire width of the sports hall to make a turn. They would have liked to have placed the motors further apart, but the wires were too short.

"It flutters too much," says Roling. "The wings are too thin and this makes them flap." The conversations between supervisors and students are about the latter’s designs, and what is good or bad about them. They talk about stalling, heading stability, roll stability, winglets, and about the dynamic displacement of the lift point.

With so many ways for an aircraft to crash, it's a wonder any of them stay airborne long enough to hit someone. 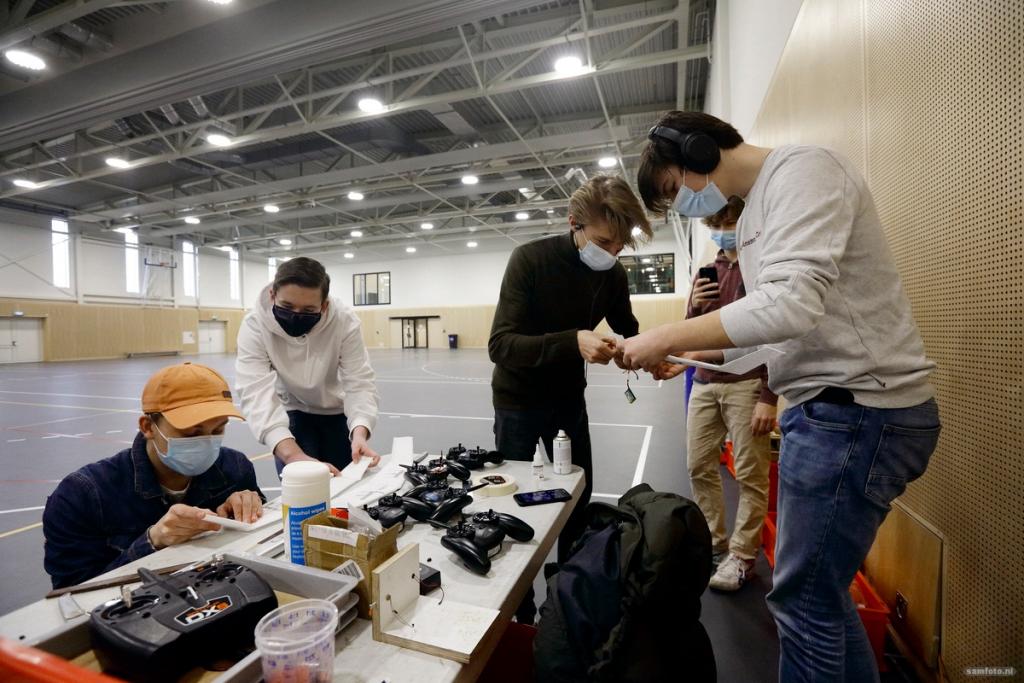 The model workshop in times of corona. (Photo: Sam Rentmeester)

The rate of traffic injuries is much higher in old inner cities than elsewhere in the country, concludes Prof. Bert van Wee who was part of an RTL Nieuws investigation.
Science

‘We just want to show what is happening to the climate'

He does not want to wag his finger, but does feel that people should be more aware of climate change. That’s why student Dennis Botman thought up an app called ThermoMate.