The professor and the lighthouse - a rescue plan

The Lange Jaap tower has been in use as a lighthouse since 1878. (Photo: Evgeni Tcherkasski / Unsplash)

The iconic lighthouse near Den Helder has so many cracks that the area has been cordoned off. Professor Adriaan Beukers is working with local entrepreneurs to find a solution.

The 60-metre-high cast-iron lighthouse has survived winter storm Corrie. According to Professor Emeritus Adriaan Beukers (Aerospace Engineering), a cast-iron tower simply cannot be blown over for the same reason that a stone chimney does not blow over: the downward weight is higher than a wind-driven pull can ever be.

Nevertheless, the area around Europe’s tallest cast-iron lighthouse, Lange Jaap (in Dutch) in Huisduinen, has been fenced off since September last year because the Department of Public Works (Rijkswaterstaat) fears its collapse following the discovery of large cracks in the tower's walls.

‘Cracks in the wall mean that the forces of this 500,000 kg tower can no longer be properly distributed across the structure,’ says Rijkswaterstaat. ‘Weaknesses have developed in the walls. In the worst case, this could lead to the lighthouse toppling over.’

“Cracks could make the tower unstable locally if its strength and rigidity are undermined too much,” Beukers explains.

The cracks in the wall come on top of previously identified defects such as growing rust in the joints and loosened floors. The tower is so unsafe that people cannot carry out repair work in and on it, according to Rijkswaterstaat.

In cooperation with the Rijksdienst voor Cultureel Erfgoed (Cultural Heritage Agency) Rijkswaterstaat has been looking for ways to support and preserve the historic lighthouse.

Adriaan Beukers, TU Professor Emeritus of Composite Materials and Constructions, has drawn up a plan in cooperation with the composites industry in North Holland to preserve Lange Jaap by wrapping it in high-quality composites.

Carbon composite to reinforce cast iron has previously been used in the London underground, says Beukers. The underground’s ceilings needed to be reinforced because of the increased overhead traffic.

The lighthouse in Den Helder is not round, but 16 sided. The flat surfaces match well with Beukers’ choice to use polyhedrons or planks of carbon fibre with epoxy to reinforce the tower. Carbon fibre’s rigidity is equal to that of cast iron, and epoxy is a high-quality material that has proven itself in aviation for decades.

Piet Goverse, Programme Manager at the European Fund for Regional Development for North Holland, explains how the lighthouse could be saved. Planks measuring 3 by 0.5 metres will be produced at a factory and glued to the tower at an angle of 60 degrees using tough glue. The transitions between the cast iron panels and the cracks will be reinforced with extra layers of impregnated carbon fibre. A second layer will then be applied at an angle of minus 60 degrees. Carbon sheathing will then be rotated like a protective double helix around the tower from the 10.60 metre diameter mark at the bottom to the 3.90 metre diameter at the top.

Both Goverse and Beukers believe that the operation, that they estimate will cost less than EUR 10 million, will eventually be virtually invisible. “A few extra centimetres through the composite shell will not be visible in a tower that is several metres thick,” says Beukers,

Once the outside has been fastened, Goverse thinks it will be safe to work inside again. He proposes repairing the cracks, sometimes centimetres wide, in the cast iron floors with an H profile which, thanks to a flexible silicone mould, will run entirely in line with the crack.

The plan by Beukers and Goverse is on a list of 13 ideas (in Dutch) to repair the lighthouse that Rijkswaterstaat is currently assessing. The decision will be taken at the end of January. 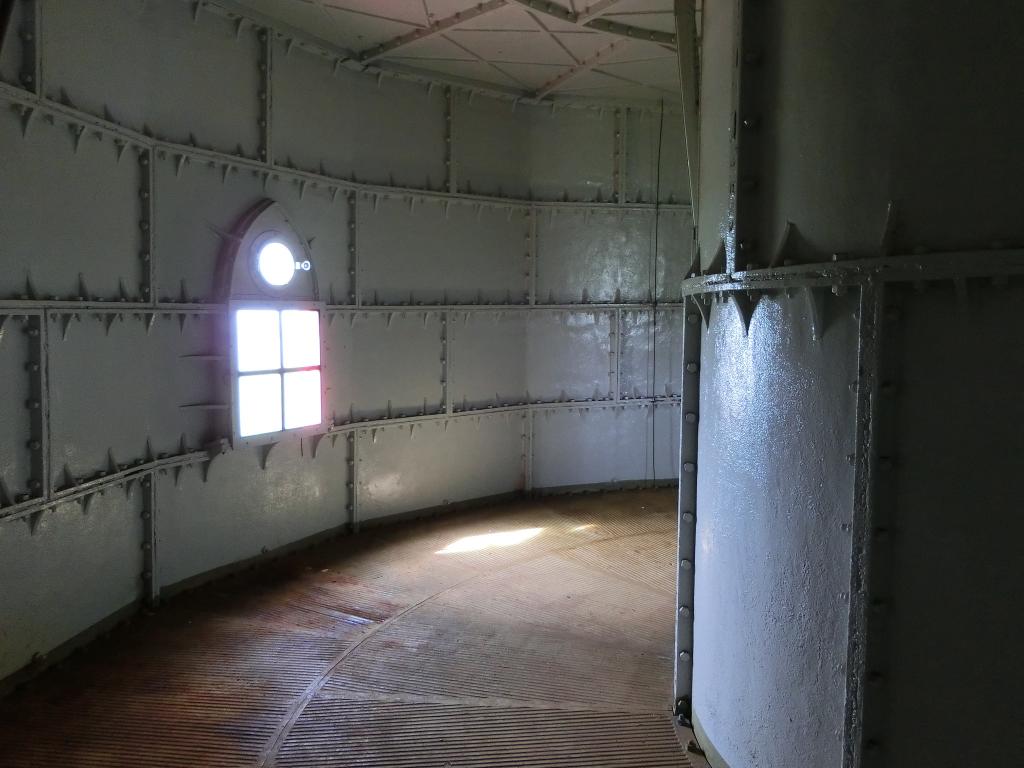 Interior of the tower with bolted panels and hung floors. (Photo: Regionaal Archief Alkmaar via Flickr) 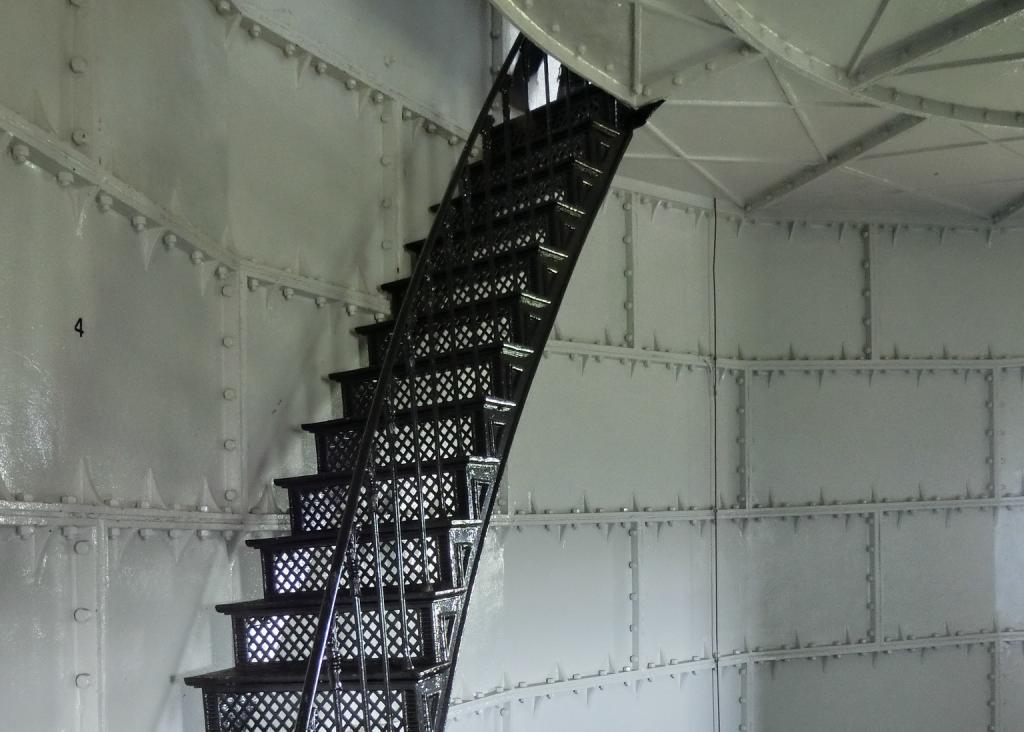 The tower has 284 steps. (Photo: Regionaal Archief Alkmaar via Flickr) 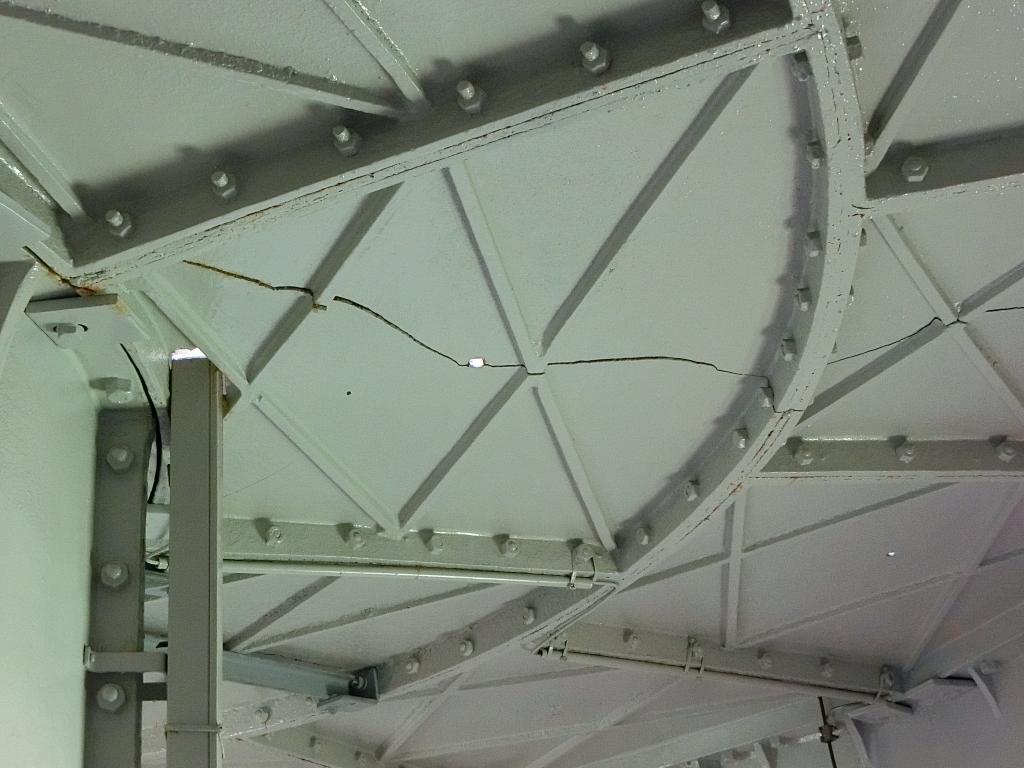 Cracks in the floors may be repaired with carbon epoxy, just as the exterior. (Photo: Regionaal Archief Alkmaar via Flickr)