Organise your life with games

Students incorporated 'real' world problems into a game at the Building Serious Games master course. What solutions did the four teams come up with?

For a period of 10 weeks, 21 students worked in four groups on a serious game - a game whose primary purpose was not pure entertainment. The games incorporate problems from the ‘real’ world, such as stress among students and the lack of networking at academic conferences. The students presented their games on Friday, January 24th at EEMCS.

Most participants on the Building Serious Games course study computer science, but this is not a prerequisite. "The course is not only about programming games, it is also about their psychological aspects and design", says lecturer Dr Rafael Bidarra of the Computer Graphics & Visualization Department, Faculty of EEMCS. This is why Bidarra is also pleased with students of industrial design, architecture and media technology from Leiden.

The students design games commissioned by external parties. One of them is the Science Centre Delft where some games, like last year’s Hot Pipe, are further developed. This year’s newcomers are Meereffect, the partner of the Getting Things Done (GTD) company, the De Energiebespaarders energy consultancy, and serious game studio GameTailors.

Help students reduce stress"What do you experience when you're stressed?" Tim Bruyn asks his project mate Konstantinos Chronas. "All the things I have to do circle around my head and I get distracted", Chronas answers. To get these kinds of thoughts under control, the team designed the simulation game BusyBusy. In the game, the player helps the character Jeff make choices. Jeff is in his dorm room and clouds of thoughts appear that the player has to arrange or execute quickly.

The idea is based on Getting Things Done (GTD), a management method by David Allen. This productivity consultant defined 5-simple steps to getting things done and live stress-free. Two of these steps, collecting thoughts and reflecting on them, have been incorporated into the game. The team discovered that players of the game began to see the value of gaining control over their own thoughts. You can play the game online here.

Team building icebreakerThat uncomfortable moment for students when they are assigned to a new project group. Maze Maestro, breaks the ice. Players put their phones on the table. Together they form a maze where avatars of the players can move from one phone to the other. By working together the team members have to find their way to the treasure. The higher goal is for the players to build a team bond.

The advantage of using the phones, say the students, is that during the game, the players cannot do anything else on their phones. Therefore, unsolicited WhatsApp messages have yet to be programmed out. With this link you can install the game on an Android phone. 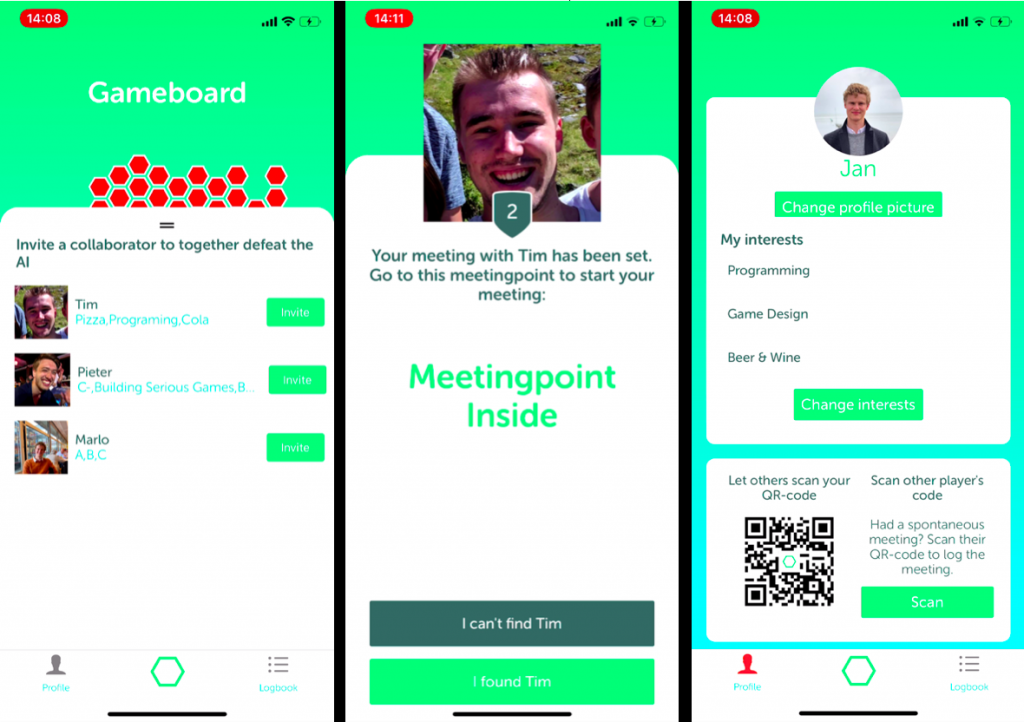 Meaningful meetings at academic conferencesAcademic conferences are a good opportunity to network. However, most visitors mainly speak to people they already know. Civitai, a mobile party game is going to change this. Players have to work together to conquer a territory. To achieve this, they have to meet as many other players as possible. Through the game on your mobile phone, you can invite other visitors and arrange a meeting place. The other person can reject or accept the request. It is a little bit like Tinder, only then for science. Watch the trailer here. With more data from LinkedIn or Facebook, the designers can also propose meetings based on interests and disciplines.

More sustainable than your neighbours
How much money do you save with solar panels or a heat pump? You can try that out in the simulation game Supreme Green Time Machine that students built for the energy consultancy firm De Energiebespaarders. This company wants to show players that long-term investments such as solar panels are ultimately cheaper. In the game, the player has a house and can choose which products to install over a period of 15 years. The goal is to make your house at least as energy efficient, comfortable and cheap as your neighbour’s house. You can play the game online here.

More than half of the PhD candidates at Dutch universities are in employment. The rest are trying for a PhD at their own expense or for example with a foreign grant.
Science