The strength of the solo rower. Laila Youssifou (Laga and TeamNL), here seen training on her own on the Bosbaan, is a possible skiff rower for Japan. (Photo: Merijn Soeters)

The postponement of the Olympic Games has also affected the top athletes at TU Delft. What does it mean for sailor Annette Duetz and rowers Bart Lukkes and Ellen Hogerwerf?

“It’s such a pity,” says Annette Duetz, “but it is the right decision. Going ahead with the Games in summer was out of the question. I’m glad the decision has finally been taken now so we know where we stand.”

Duetz and her sailing partner Annemiek Bekkering were double world champions in their FX49er. She remains highly motivated for the Tokyo games, for which the duo had already qualified. “We still want to do well there, whenever it will be held.”

The sailors, who came seventh at the Rio Games, did lengthy training in Japan last summer to acclimatise to the local conditions and the heat. “If the Games would be held in spring, it would be cooler. That would be an advantage.”

So long as the lockdown doesn’t disrupt things further, the pair will train at sea at Scheveningen. The Games’ postponement does give her the opportunity to prepare for her last year of her master’s in Applied Sciences. “I’m going to see if I can start in earnest.”

Lukkes  and his lightweight double scull teammate Ward van Zeijl, now have more preparation time to boost their chances for qualification. “This is an advantage for me, but I feel bad for my friends who have already qualified.” 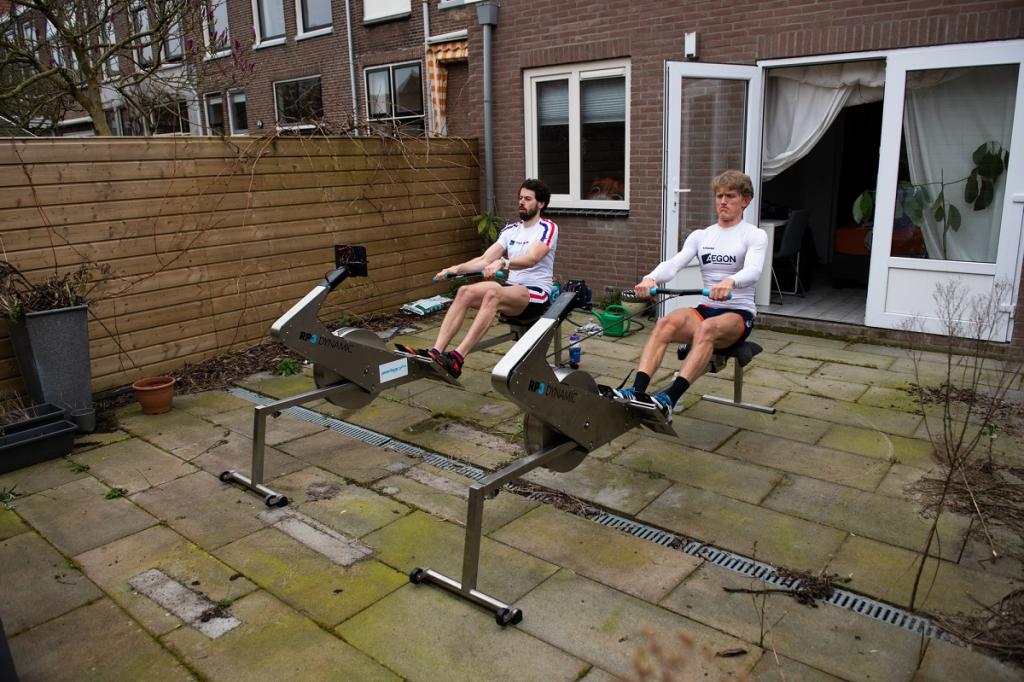 As the rowing association does not include lightweight rowers the pair is not training as part of TeamNL. After the World Cups were cancelled, the association promised that they would be able to compete in the Olympic Qualification Tournament in May.

Not even the cancellation of that event put a dampener on Lukkes’ motivation. He believes that new opportunities will come. “I love training. I don’t really mind having an extra year to train.”

If they are not outdoors cycling, they both train indoors. “We have halters and kettlebells for power training. And ergometers in the garden. We already know how to row.”

Lukkes, an IDE master’s student who graduated in December 2019, was looking at starting his career after Tokyo. “I have some applications with potential on the go. We will need to talk as I need to combine my job with training at top level. I’m sure it will work out.”

Ellen Hogerwerf
Rower Ellen Hogerwerf, as a member of the successful W4 (coxless four) has a serious chance at Tokyo. She is pleased that the International Olympic Committee has taken a decision.

“I’m very disappointed. I think I stood a good chance and really wanted to compete. I am trying to stay at home as much as possible as it’s the most sensible thing to do at present. I had an ergometer at home for training, but it’s not really ideal.”

‘I lived for it all winter long’

After competing twice before and not winning medals, an Olympic medal is still on her wish list. But the 31 year old TU Delft alumnus is now doubting.

“I have to let it sink in. I’m afraid that I’ll regret it afterwards if I don’t continue. I was fully prepared and fired up to do it all once more. I lived for it all winter long. One problem is that there are no more competitions for the rest of the season.”

Her third Olympic attempt was not in vain. She won gold at the European Championship and silver at the World Championship. “This has given me confidence. In terms of my career, I’m looking around, but have nothing specific at the moment, so it will not be a hurdle to competing.”

‘I’m waiting for flights to Europe to start again’

In order to miniaturise satellites, PhD candidate Sujay Narayana says you have to overcome energy challenges. His PhD is taking some extra time because of the lockdown.
Campus

The personal data of TU Delft students, staff and applicants have ended up on the street after an employee’s non-encrypted laptop was stolen.
Campus

Seven answers about the cameras on campus

The cameras in busy campus areas are still heavily debated. Youth parties have now sent a letter to the Executive Board. What is in the letter? This and six other questions.