Infrared spectroscopy can reveal the condition of the skin. Philips, who sponsored Dr Anna Ezerskaia’s PhD research, explores applications in cosmetics and dermatology.

Beauty is skin-deep, says 17th century wisdom. In the 21st century pandemic, it’s said we have become hungry for skin. Whatever the era, skin is your first impression of another human being. Is the skin smooth, wrinkly, radiant, sweaty, pale or greasy? First impressions count. Little wonder that people want their biological calling card in optimal condition.

The skin’s health depends on the delicate balance between moisture and lipids or sebum – a mixture of lipids. A dermatologist will establish the skin’s hydration (typically between 40 and 80) with a so-called corneometer. Measuring the oiliness of the skin requires yet another device, called a sebumeter.

Anna Ezerskaia, working at Philips’ Department of Personal Wellness and Care, set out to develop a contactless optical device that could estimate both skin properties (hydration and oiliness) at the same time. TU Delft Professor of Optics Paul Urbach (Faculty of Applied Sciences) supervised the research within the framework of a PhD research project. 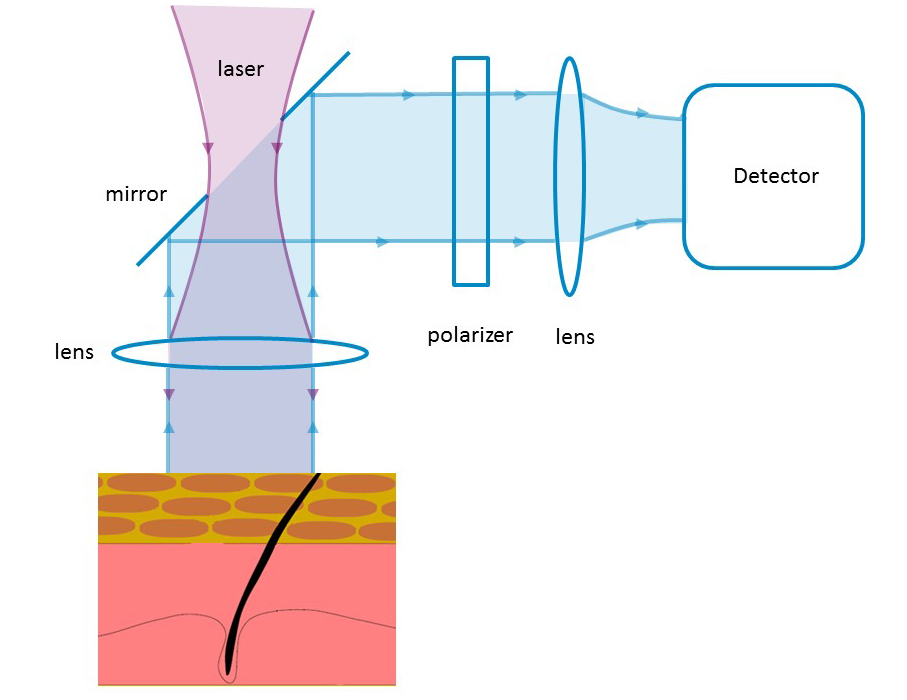 Infra red
Ezerskaia used three adjacent far-infrared wavelengths that were sensitive to either water or lipids, or both of them. Measurements from three carefully tuned diode lasers (to 1,720, 1,770 and 1,750 nanometres) reflecting on skin thus reveals both the hydration and oiliness in one measurement. In clinical surroundings, this technique may classify skin types more reliably than traditional techniques since it images a large skin area.

Although the experimental setup covered half a desk, Dr Babu Verghese has no doubt that the required lasers and optics can be brought down to a handheld format. As a senior scientist at Philips Biomedical Systems Division, he supervised Ezerskaia’s research in the lab. But there is another snag. Far-infrared lasers are too expensive for this application. This means that the optical window will have to ‘move up’ to the near-infrared where the signals are less strong and more prone to offsets by blood or skin colour.

Gone glossy
Another skin issue is the shininess of an oily skin. Ezerskaia writes that ‘glossy and oily skin is not considered aesthetic and is seen as unpleasant and often associated with dermatological disorders.’ Consequently, there is also a market for products that promise to reduce sebum production and facial gloss. But what’s missing is an instrument that quantifies skin gloss, which is strange, because gloss measurement is well-established in the paint and surface coating industry.

Ezerskaia developed a prototype contact-free skin gloss meter. It uses a small camera and LED lights in a small box to be placed on the skin. The glossiness of the skin is calculated from the reflection of the LEDs; the more localised the reflection, the glossier the skin.

One can easily imagine the integration of both measurements (skin condition and gloss) in one instrument. Philips alludes to ‘a cosmetic optical sensing device that can bring more quantitatively reliable skin information for use in dermatological clinics, beauty parlours and/or households.’ Both techniques have been patented.

Parliament clashes on diversity in science

Right-wing parties clashed with parties on the left on how to combat racism and discrimination in higher education and research, during a debate in parliament on Wednesday.
Science

Is there a coastal expert who knows why shellfish reefs wash up in wave shapes on the beach, asked a beach photographer. TU Delft researcher Matthieu de Schipper can help.