On Monday, the Dutch newspaper NRC (link in Dutch) turned the spotlight on this.

There are also PhD students with external funding, who, for example, receive time from their employer for a PhD programme or who come here on a foreign scholarship. Chinese PhD students with a scholarship from the China Scholarship Council are an example of this. Especially in Groningen, there are also many Dutch scholarship students, also called ‘promotiestudenten' in Dutch. This 'experiment’ with Dutch scholarship PhDs will soon be up again. Minister Dijkgraaf is discontinuing the experiment with Dutch grant PhD students, he announced earlier this year. There would be too little support for it. But foreign scholarship PhDs, for example from China, can still come.

On Monday, daily paper NRC published an extensive article about the types of PhD candidates at Dutch universities. The article is headed: “Unease and shame over the rise of free PhD candidates.” The universities get a bonus for each doctorate awarded: 83,000 euros. This supposedly turns ‘free’ PhD candidates into an earnings model.

In NRC, urban geography professor Rivke Jaffe (University of Amsterdam) talks of a division along racial lines. “Almost all PhD candidates from Europe or the USA have an employment contract, while PhD candidates from China, Indonesia or Chile come to the Netherlands with a grant of 1,350 euros per month.”

The newspaper also quotes the rector of Nijmegen University Han van Krieken, who would like the 83,000 euro bonus for the completion of a doctorate to be abolished. He says that several other administrators think the same way.

The UNL figures show big differences between the universities. Groningen has a lot of PhD candidates with a grant because that university was almost the only one to participate fully in the experiment with PhD candidates. But there are five universities where employed PhD candidates are in the minority (see the table)

According to UNL figures, TU Delft employs 2,036 employee PhDs, which is 67 per cent. This puts TU Delft slightly above the national average. 586 of the researchers are scholarship PhDs (19 per cent) and 316 are externally funded PhDs (10 per cent). 75 of the researchers fall into the ‘outside PhD student’ category (2 per cent). 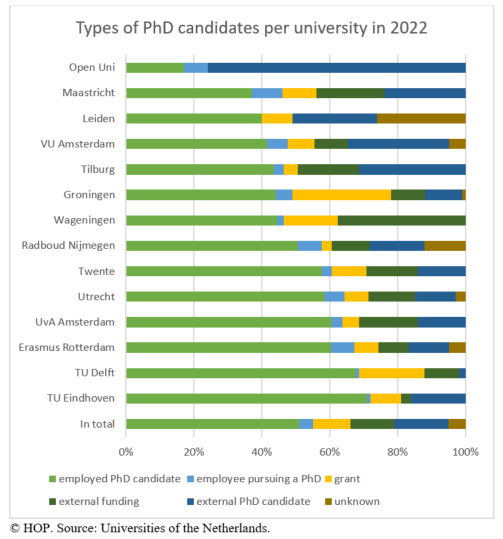