MRI is one of the most powerful technologies for viewing the inside of the body. Unfortunately it is too expensive and complex for developing countries. That is why Martin van Gijzen, Rob Remis (TU Delft) and Andrew Webb (LUMC) are working on an affordable, simplified version.

A baby boy lies in the arms of his mother Nakira Manjeri. She is carrying him to the hospital in Mbale, a city in eastern Uganda. His head looks like a balloon. His skull is almost three times the size of his thin body. He is on the way to a hospital which, thanks to donations from an American religious charity, has enough specialists to operate on five to seven children per day. A CNN report in April this year said the hospital's young patients suffer from spina bifida, brain tumours or – in this case - hydrocephalus.

Hydrocephalus is rare in the Netherlands, affecting approximately one in every 500 births. In Uganda, swelling of the skull usually occurs after birth and is often caused by a bacterial infection. It is estimated that hundreds of thousands of children in sub-Saharan Africa develop hydrocephalus every year, with 1,000 to 2,000 cases in Uganda alone. And the country, with a population of over 40 million, has just one MRI scanner, which is not in the hospital in Mbale.

Instead of an electromagnet, Webb wants to use an ordinary magnet that does not require electricity

“We do have a CT scanner, but the X-ray radiation is very dangerous for children. An MRI scanner doesn’t have that disadvantage,” paediatric neurosurgeon Steve Schiff of Penn State University writes by email. He travels from the US to the African hospital on a regular basis to operate on children. “The precise location of the fluid in children's heads can also be very complicated. This means we not only require safe equipment, but we also need help interpreting the images – as there is a lack of radiologists in developing countries.”

Magnetic Resonance Imaging (MRI) is one of the most powerful technologies ever developed for examining the inside of the body in detail without surgery. Unfortunately MRI scanners are incredibly expensive and difficult to operate and maintain. Therefore patients and doctors in many parts of the world have little or no access to this technology. “So it is high time for an affordable and simple MRI scanner,” says Andrew Webb, Professor of MRI Physics at Leiden University Medical Centre, who worked with Schiff in his previous job. 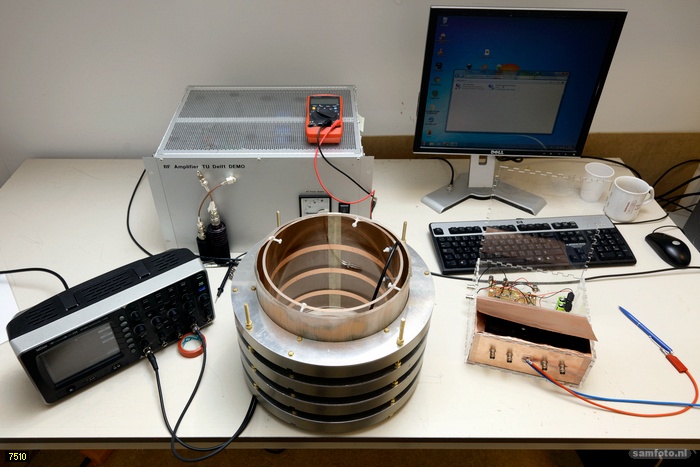 When Webb moved to the Netherlands in 2008 to head the C.J. Gorter Center, where some 40 people conduct research on MRI, he soon met two people at TU Delft, with whom he continues to work regularly: Associate Professor of Electrical Engineering Rob Remis and Associate Professor of Applied Mathematics Martin van Gijzen. The three of them started by putting two Master's students to work. “They tried making images using a toy magnet measuring about eight centimetres, but were unsuccessful,” Van Gijzen recalls.

That would have been a minor miracle. The magnet is currently the most expensive part of an MRI scanner. More precisely, it contains electromagnets, which consist of electric coils of superconductive wire through which electricity passes. The generation of a magnetic field with a strength of 1.5 to 3 tesla produces a tremendous amount of heat. For this reason, cooling is required. This is done using liquid helium, and requires a lot of energy. Furthermore, highly trained staff are needed in order to operate such a high-tech device. And if something breaks, a specialised technician must be found to repair it. All in all, a conventional MRI scanner easily costs around two million euros excluding maintenance costs. In short, the MRI scanners we are familiar with consume too much energy, and are too complex and expensive for developing countries.

The next step. “The question is: will we be able to use low-cost hardware and excellent software to make an MRI scanner that is good enough to analyse hydrocephalus?” Webb asks. Instead of an electromagnet, he wants to use an ordinary magnet that does not require electricity. This means no heat will be generated either. According to Webb, the strength of the magnet has to be about 100 millitesla. This should produce MRI images with precisely enough detail to allow a diagnosis to be made. The location of the fluid in the brain should, in any event, be clear.

‘The real work will be converting poor-quality signals into good images. That'll be a huge mathematical challenge’

The strength of the magnet is one of the main obstacles. The reason for this is that, in a magnetic field, you become a type of magnet yourself. The hydrogen atoms in your body align along the magnetic field lines and become mini magnets. An amplifier then emits pulses that disturb the balance of the mini magnets. If the pulse stops, the magnets start spinning, as a result of which they emit radio waves. The precise spinning motion depends on the tissue in the body. In other words, different tissues emit different radio waves. All the radio waves are monitored by a receiver and finally converted into images. So, the stronger the magnetic field, the more the hydrogen atoms are magnetised, the faster they spin, the higher the frequency of the radio waves, and the more detailed the picture.

Although the first proof of principle with the toy magnet did not produce an image, the three researchers from Leiden and Delft did learn a lot from it. They submitted a subsidy application to the NWO Open Mind programme, a special fund for developing ideas for socially engaged research. Last year, they received fifty thousand euros to further develop their idea. “This gave us a great opportunity to develop something serious,” says Van Gijzen.

Last week, he brought a signal generator and a 26 cm diameter magnet from Delft to Leiden in the boot of his car. “The biggest challenge was making a ring that is light and sturdy enough for 96 magnets each measuring three centimetres. We ended up making an aluminium holder and drilled holes into it. We then inserted the magnets into the holes very carefully, each at a different angle. You don’t want to get your fingers caught in between, because the magnets exert great forces on your hand!” All in all, the compound magnet has a strength of 60 millitesla, i.e. 0.06 tesla. Webb and his team in Leiden are currently working on making the receiver. After that, Van Gijzen can set to work on the last step: creating the images.

“So far, we‘ve worked on developing methods to make images, but we haven’t been able to test them on real signals yet,” says Van Gijzen. “At the time our first prototype hardware will be ready, my work really starts, converting poor-quality signals into good images. That’ll be a huge mathematical challenge.”

MRI scanners in the Netherlands have powerful magnets coupled with normal computers to process the data, but the three scientists want to try it the other way round: a weak magnet coupled with powerful calculations. After all, computing capacity is becoming cheaper and cheaper. “The problem is, though, that a weaker magnetic field also provides a weaker signal and more interference,” says Webb. “So we really needs Martin’s mathematics in order to produce useful data.”

Asked how he feels about doing a low-tech project for a change, Van Gijzen replied that the mathematics for this project is actually very high-tech. “It is also rather unique for me to make a product that can improve children’s lives. I‘m a mathematician and normally create algorithms, mathematical models or software, but this goes beyond that,” says Van Gijzen. Webb also finds the project a huge challenge. He spends most of his time working on the development of a 7-tesla MRI scanner, which can provide super-high resolution images of the body. “A commercial MRI system is like a car, in which everything is now automated. Twenty years ago, you could repair it yourself. That’s what we want now with low-budget MRI: we want to make a modular system in which everything can be easily replaced. So we have to develop everything ourselves.”

In September, Andrew Webb won the 2017 NWO Simon Stevin Master Prize. It included a cash award of 500,000 euros. Professor Webb wants to use some of that money on a more affordable device. “My group receives grants worth 10 million euros, all of which are intended to develop advanced technology for wealthy people. That’s fine, but of no use to 80 percent of the world’s population. But the mathematical techniques we'll develop for our simple scanner can also be used in more powerful devices. It will be possible to scan people much quicker in the future.”
The three researchers will continue their work at least for the next four years, thanks to support from Delft Global and the NWO. The next big step is to take the low-cost MRI scanner to Africa and, together with Schiff, to use it to treat hydrocephalus in children such as Nakira’s son.

When power fails, electronics should not

The Internet of Things includes billions of devices. Fitting these with batteries would cause a disaster. An EEMCS research group has a better idea: intermittent computing.