More international students: where are they headed?

More and more foreign students are coming to the Netherlands. On balance, the universities attract the most internationals, but arts-academies are also popular.

This academic year, the universities broke another record: according to the preliminary enrolment figures, there have never been so many people studying at the university. This growth is mainly caused by the large influx of international students.

A new internationalisation monitor from Nuffic shows that HBO (higher education in applied arts and sciences) also attracts many foreign students. The monitor was created using the final figures for the 2020-2021 academic year.

One Quarter from AbroadIn the Bachelor's programme, there was a considerable difference between education at a research university (WO) and HBO. In WO, 19.8 percent of students came from abroad, while that percentage in HBO would not budge from 6.3 percent.

In absolute numbers, WO was much more popular than HBO. Last academic year, a total of 103,708 internationals studied in Dutch higher education. At the universities, there were 40,851 Bachelor’s and 29,741 Master‘s students. The universities of applied sciences had 29,863 international Bachelor's students and 3,253 Master’s degrees.

MaastrichtWhich institutions attracted the most internationals last academic year? In WO, their numbers — unlike in HBO — increased everywhere. The sharpest increase was seen at the University of Amsterdam, with nearly 2000 new internationals. 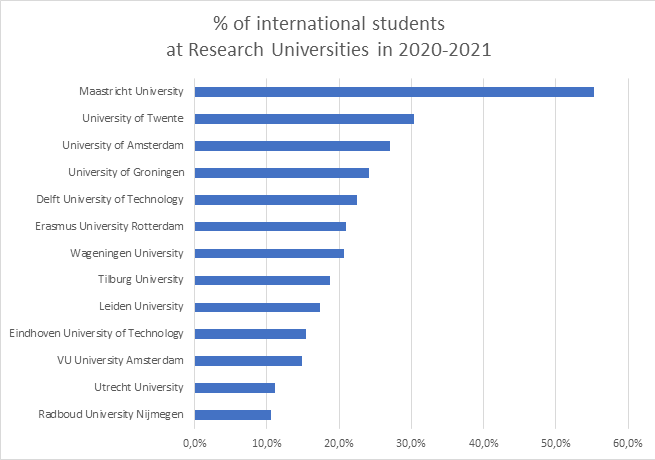 Yet Maastricht is likely the most international university. There, more than half of the university student population came from abroad: 55.3 percent. At number 2, the University of Twente, this was “only” 30.3 percent.

Remarkably, in the top 10 higher education institutions with the largest number of international students, there was one university of applied sciences: Fontys at number 7, just above the Vrije Universiteit Amsterdam, Utrecht University, and the University of Twente.

Many international students plan to stay in the Netherlands after completing their studies. According to a study by Nuffic, it is more than half of them. The respondents cited the high standard of living and the quality of research and education as the main reason for not leaving.