International bachelors more likely to drop out than Dutch

At the beginning of this academic year, students were shown around the campus. (Photo: Justyna Botor)

One in four international university undergraduates have left the Netherlands in less than four years without graduating. What is the situation in Delft?

Dutch universities are attracting an increasing number of students from abroad. That has advantages and disadvantages, says the Inspectorate of Education. Internationalisation can contribute to a good learning environment but also puts pressure on the quality and accessibility of the education. Accommodation is a problem too.

So it is relevant to ask whether those students are in the right place here, the inspectors feel. To get a clearer view on this, they looked at the study results of undergraduates since 2011. They have summarised the outcome in a fact sheet.

No difference
It
turns out that 17 percent of the international students leave within one year. In that context there is no difference between students from within or outside the European Economic Area (EEA). Maybe they opt to study in another country, but there are no figures on that. The Inspectorate calls it ‘drop-out’.

Only 6 percent of Dutch undergraduates stop studying within one year, although 28 percent switch to a different study programme. 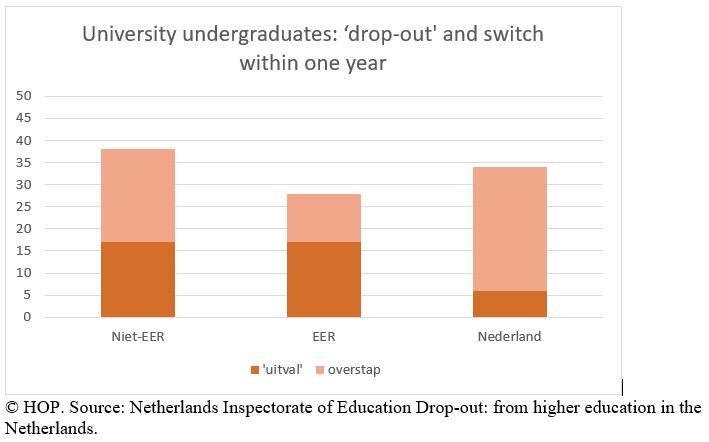 So roughly a third of the students do not choose the right study programme straight away, the Inspectorate says. That is the case slightly more often for non-European students than for non-Dutch European students. Dutch students are in between.

International students drop out more often than Dutch students in later years of the programme as well. After four years, a quarter have quit Dutch higher education without a Bachelor’s degree, as against 9 percent of Dutch students. 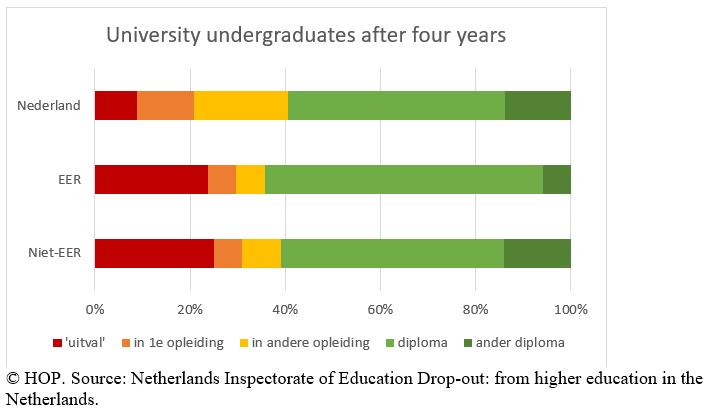 The inspectors are unable to say why so many international students leave the Netherlands prematurely: “This may have something to do with the institution or study programme, but it is equally possible that they simply don’t enjoy studying abroad.”

What about all this at TU Delft? The available ‘executive indicators’ do not measure quite the same things as the Inspectorate of Education.  For example, what cannot be gleaned from the figures is how many international bachelors at TU Delft leave the Netherlands within four years.

However, much is known about the differences between Dutch and international bachelor students when it comes to intake, dropout within 12 months and study switch within TU Delft. We will list these below.

Dropout rate
At first glance, the dropout rate of bachelor students within 12 months at TU Delft is higher than the national average, especially when looking at Dutch students. This is partly due to the distinction TU Delft makes between dropout and study switch, where the Inspectorate makes a total view.  Also, TU Delft’s study switch figures do not only cover the first 12 months, while the available dropout figures are limited to that period.