How to revive drowned gas wells

When pressure drops in a gas reservoir, accumulating water may stop the flow. Sticking a pipe deep into the well may help. Master’s student Pjotr Muis showed how it works.

It seems strange to be working on increasing gas production while all the talk in the Netherlands is about closing down gas production in Groningen and getting off the gas grid as soon as possible. This, however, is the Dutch and partly European perspective, and not the whole world’s. According to the International Energy Agency, gas consumption worldwide is expected to grow considerably. It mentions China, the Middle East and North America in particular. China, for example, aims to switch from coal to gas for power production in order to reduce CO2 emissions.

The method of sticking a pipe deep into a gas well to give it a few more production years, is known as a ‘velocity string’. Professor Ruud Henkes (Faculty 3mE), who works part-time for Shell, knows the method from the field. “The Netherlands has more than 200 offshore gas wells which have a lifetime of about 20-30 years. A velocity string can lengthen production by 10%.”

The invention may be economically feasible, but the effect of the measure is unknown in advance. It sometimes works, sometimes it doesn't. Gas companies would like to have more certainty beforehand.

Blowing along
A gas well is typically 2-3 kilometres deep. The initial pressure may be over 200 bar, resulting in high gas velocities (30-40 m/s) through the production pipe in the well bore. At these speeds any water from the reservoir or condensation from the gas will be blown up the pipe to the surface.

A large experimental set-up has been built at 3mE

The industry’s solution, says Henkes, is to lower a small diameter pipe from a roll down the well bore. The size of diameter and how far down is always a bit of a gamble, as is the effect of this remedy. The flow now occurs in the annulus between the original production pipe and the velocity string. This ‘pipe-in-pipe’ principle is meant to force water out of the well borehole by reducing the effective cross section of the pipe, thereby increasing the gas velocity in the hope that the water will, once again, make it to the surface. And not drown the well. 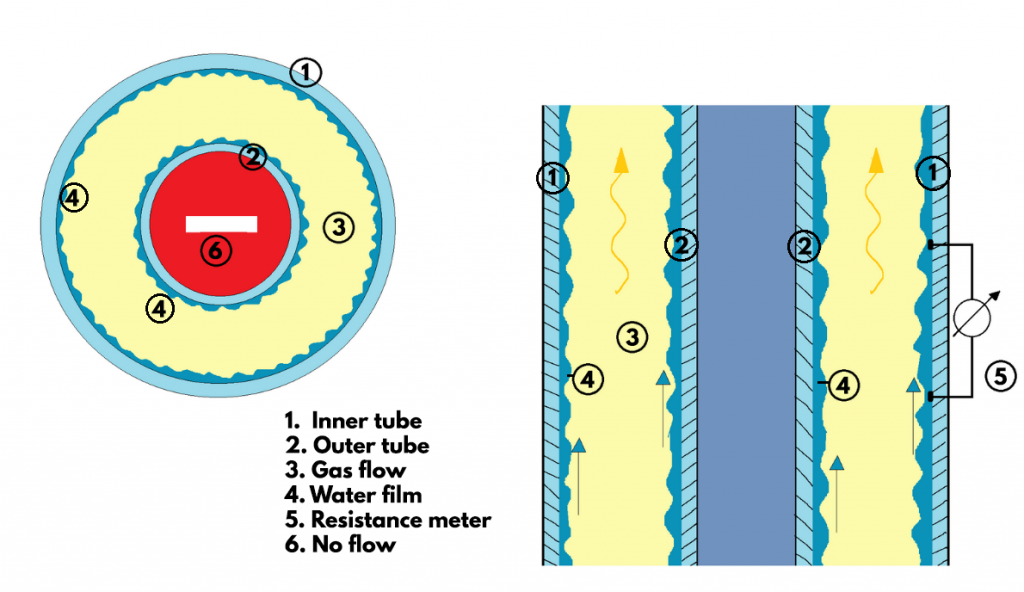 Plastic pipes
A large experimental set-up has been built in the Process & Energy hall in the 3mE building. A 12 metre transparent vertical pipe almost reaches the roof. In an earlier experiment, former PhD candidate Dries van Nimwegen studied the effect of soap bubbles on aging gas wells.

In the new set-up, master’s student Pjotr Muis and his supervisor Arnoud Greidanus researched the multiphase flow of air and water in the annulus between a 124 mm outer pipe and an inserted 100 mm inner pipe. Known to the industry as a mid-scale experiment, the dimensions are quite large for a laboratory experiment: gas speeds up to 32 m/s (like sticking your hand out of the car window at 120 km/h) and a gas volume of up to 8,000 litres/minute.

Video footage shows that as the gas speed increases, so does the speed of the liquid transported in the film along the inside of the outer pipe and the outside of the inner pipe. By measuring the electrical resistance of the passing liquid, Muis was able to determine the thickness of the liquid films on both sides.

In practice, the inner pipe will never be exactly in the middle of the outer pipe. So what are the consequences of an eccentric position? Here, video footage shows that the liquid may even flow downward.

Production prediction
What does that mean? Henkes praises the practical, original and multi-faceted work that Muis has done (his thesis was awarded a 9). The next step is to build a mathematical-physical model on the basis of Muis’s measurements. In practice, concentric and eccentric sections will alternate and a mathematical model is needed to establish the overall effect. Such a model, Henkes expects, will be made available to the industry by consultancy firms after publication of the results. In the end, gas companies will want to know if a velocity string will revive the production of a specific well with its individual parameters and for how long.

When power fails, electronics should not

The Internet of Things includes billions of devices. Fitting these with batteries would cause a disaster. An EEMCS research group has a better idea: intermittent computing.
Science

TU Delft molecular biophysicist Nynke Dekker is one of four Spinoza Prize laureates of this year. She will be awarded EUR 2.5 million to spend on research.