How corona is also inspiring students

The corona crisis is putting a dampener on the Netherlands. Still, crises are also a source of inspiration. What are TU Delft students doing?

“A woman who works in a vital profession with a daughter at secondary school who needs homework support just called. We were able to arrange it with two telephone calls.” This is TU Delft architecture student David Oudega (21). He is working with three housemates from home to connect people who need help to people who want to help. He has joined the ‘gewoon mensen die mensen willen helpen’ (ordinary people who want to help people) initiative and is the coordinator of the Delft and The Hague region.

The ‘gewoon mensen die mensen willen helpen’ initiative was started by University of Amsterdam econometrics students Naut van Teeseling (20) and Amber Nagelhout (24). Naut sent a Google form to fellow students via WhatsApp. They could submit their name, study and what kind of help they could give. The message went viral and landed at TU Delft students Jasper Veen (24) and Thijs de Jongh (23) who were prepared to help Van Teeseling and Nagelhout.

‘It grew so fast, it’s unbelievable’

Last weekend, the four of them were in Haarlem where they worked on the platform. They were approached by the media: Radio1, Hart van Nederland and Het Parool. They divided the Netherlands into eight regions. Student teams form tailor-made matches from their homes 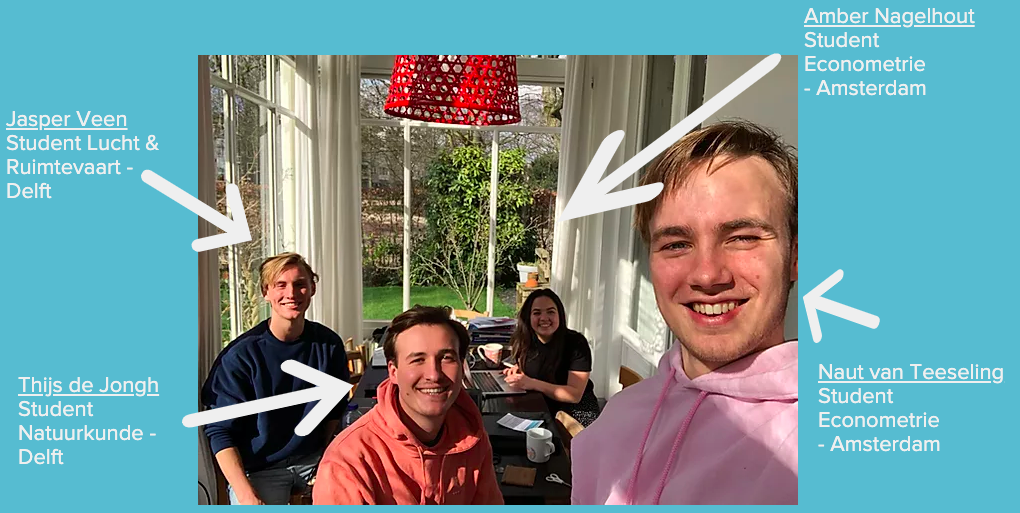 Jasper Veen, Thijs de Jongh, Amber Nagelhout and Naut van Teeseling in Haarlem. (Photo: Gewoonmensen)
One of the problems they came up against was that the people who need help are often hard to reach. Only 200 people asked for help yesterday afternoon compared to the 20,000 people – not only students – who offered help. “It is precisely the people at risk who are difficult to reach through Instagram or other social media, which is exactly what we are good at,” says Anniek Wiltink, aerospace engineering master’s student at TU Delft. She, Amber Nagelhout and 11 other students are trying to get an overview of the rapidly growing registrations, a job that the website will do at a later stage.

At the moment, the students are contacting housing associations and care homes in the hope that they can come into contact with the people that need help, says Wiltink. “We also hope to have more newspaper and television coverage as these are the channels that older people follow.”

“Up to now, 27,500 people have signed up,” said Thijs de Jongh on Monday evening on the Jinek talk show. “It’s growing so fast, it’s unbelievable.” The help needed is mostly to do the shopping or to let the dog out, adds Naut van Teeseling.

Since De Jongh’s appearance on Jinek, the requests for help have doubled. “We estimate that the demand in the Delft and The Hague region is now around 50 people,” says architecture student Oudega. “But it is hard to say as we are now approached by companies. A hospital in The Hague is looking for childcare for all its nurses. And on Tuesday afternoon, two people will help out at the food bank.”

Most people are good
‘Gewoon mensen’ placed an article by historian and journalist Rutger Bregman on De Correspondent on Instagram. ‘Don’t forget: disasters and crises bring out the best in people’. “Not only is the virus contagious, but our behaviour is too,” said Bregman in DWDD. “Every deed that you do that inspires people can spread around the country like a virus. This could even be more powerful than corona itself.”

All alone on campus. These TU Delft people cannot work from home

You can hear a pin drop on campus. Not surprising, as everyone is working from home. Aren’t they? These people are still on campus as they cannot do their work from home.
Campus

‘Design for children is what I want to do’

Earning a perfect 10 on her master’s project about helping families of children with heart defects was a nice surprise says Hosana Morales, but it wasn’t her goal.
Campus